WHEN IS THE FESTIVAL TAKING PLACE?

WHERE ARE THE CELEBRATIONS TAKING PLACE?

The parade will travel through over 1.5 miles taking in Hyde Park Corner, Piccadilly, Haymarket, ending with the Whitehall  Festival in Trafalgar Square.

WHO WILL BE TAKING PART IN THE PARADE?

Over 70 community groups will be represented on the parade, including the procession of Irish marching bands and dance groups.

Trafalgar Square will also be going green, with musicians, MCs, DJs, Irish dancers, bands and céilís on the stage. 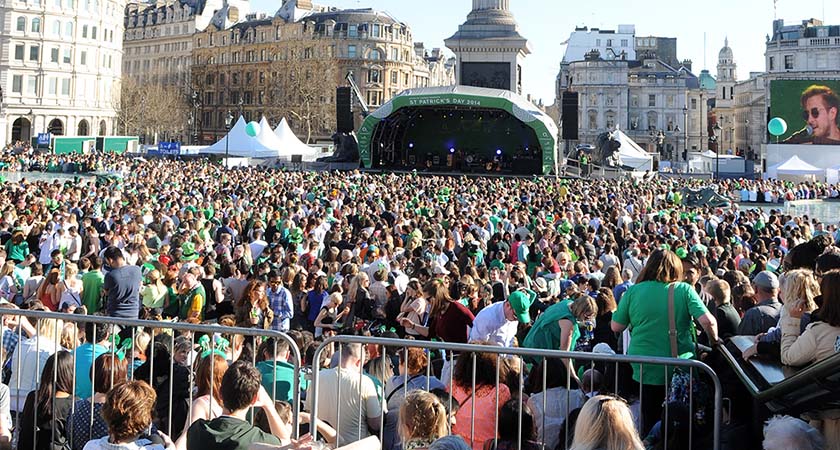 WILL THERE BE FOOD?

A street food market with a selection of delicious traditional Irish food will be held at Trafalgar Square.

WHAT IS THE HIGHLIGHT OF THE FESTIVAL?

Galway based Macnas, a street performance and spectacle company who have toured worldwide with U2, will perform an interactive and theatrical show. Details will be confirmed nearer the festival.

WHO WILL BE HOSTING THE CONCERT?

British-based Irish comedian Jarlath Regan will host the party at Trafalgar Square, welcoming special musical guests from Ireland and beyond.

Further details can be found here.

Dancing friar shows off his Irish dancing skills after Mass

SOCIAL LOCKDOWN: Bars and restaurants could be forced to close under new Covid-19 restrictions

Has coronavirus made the case for a united Ireland?