AFTER watching the classic hippy biker movie Easy Rider three times during my impressionable teenagehood, I have always nursed a nagging desire to don a Stars and Stripes bandana and roar across the heart of America on a customised Harley Davison.

It has never happened. The closest I got to that rebellious dream was climbing onto a backfiring Lambretta scooter in a fur-fringed ex-Swedish Army parka and making bottom-numbing mod revival runs to the Isle of Wight in the '70s.

So, when I learned of the growing interest in Scotland’s North Coast 500, I could not resist the chance of slipping into Peter Fonda mode and donning the Ray-Bans for a burn around a route which promised gripping scenery, classic food, majestic castles and some fascinating Highland characters.

Since NC500’s launch in March 2015 with backing from the Prince of Wales, gushing media coverage has attracted hundreds of thousands of drivers, bikers, cyclists and walkers, some apparently drawn by those overblown publicity claims of it being a new Route 66/Easy Rider experience (without the cannabis and cactus counter-culture, of course).

So off I went to test the comparisons. But hold the horses.

My partner, photographer, Sue Mountjoy, blanched at the prospect of a week on a rented motorcycle, struggling through skin-ripping Caledonian storms and hairpin bends, in a poor man’s rip-off of those classic film scenes along the once-iconic stretch of Route 66 between Santa Monica, California, and Flagstaff, Arizona.

Instead, creaking bones and common sense took over, and we set off from NC500’s start line, Inverness, in a two-berth campervan, packed with mod cons including a fridge, loo, shower, central heating, GPS, reversing camera and even an adjustable dining table. 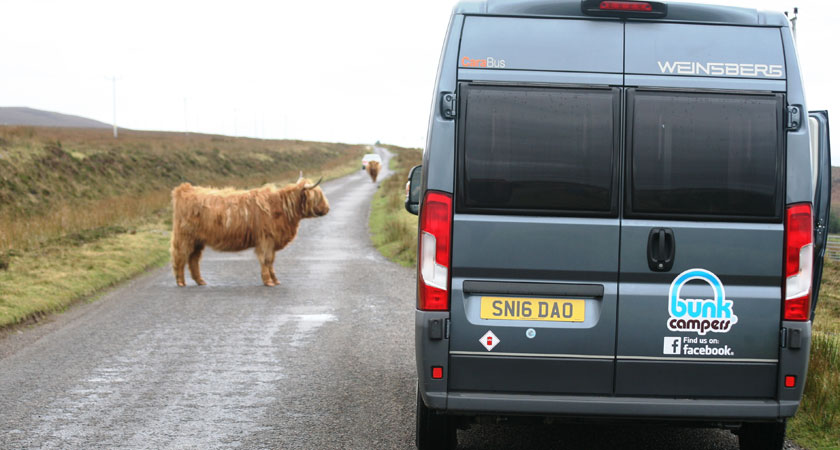 You can opt for a campervan over a motorbike, just be wary of bovine traffic hazards

And there wasn’t a Stars and Stripes bandana in sight (although, as a concession, I was allowed to belt out the film’s throttle-pumping soundtrack, including Steppenwolf’s Born to be Wild).

So, how does the trip match up? Well, that depends on how you do it.

Some people drive anti-clockwise, saving the best west coast scenery till last; others do it, expensively and leisurely, in a fortnight, pampering and gorging themselves at the plentiful luxury hotels and fine dining restaurants; some whizz round cheaply, sleeping under canvas, in a whistlestop weekend; and a few do it in the blink of an eye, like pro cyclist James McCallum, who pedalled round the full 517 madly undulating miles this summer in 31 hours (spending a blistering 28 hours and 57 minutes in his well-padded saddle).

To me, there is little reward in tickbox sightseeing. It embeds into your brain a kaleidoscope of fleeting images with no lasting memories – or dinner party anecdotes – to show for it. 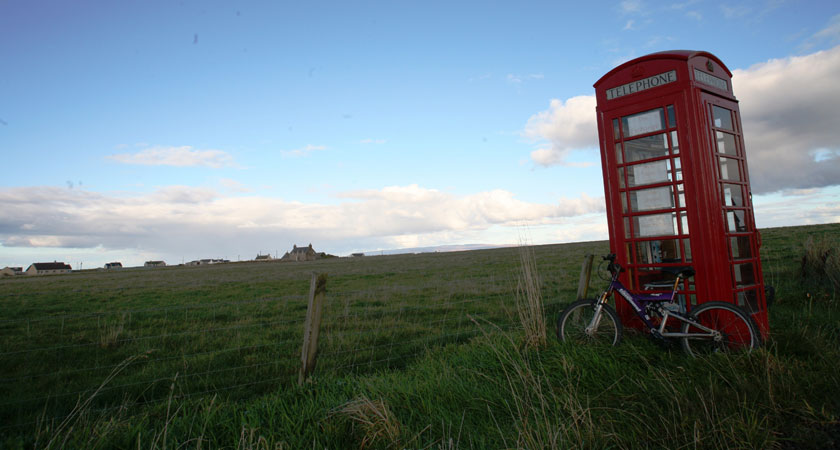 So, first stop for us in Vinnie the Van was the Glen Ord Distillery, where our opening anecdote emerged from our guide, David, a cheery former beer salesman.

He explained how a retired worker there recently told him how, during the 1970s, he would leave work every evening with one of the copper ‘dogs’ –a strength-testing vessel – full of whisky, attached by a string to his belt and hanging inside his trouser leg. “He admitted that he always walked with a pronounced limp,” recalled David with a smile.

Similar fun can be had throughout this journey, if you look for it.

Our next major belly laugh came at Bught Park in Inverness, where we were lucky enough to join several thousands of delirious fans for the annual Scotland v Ireland Shinty/Hurling match (an absolute first for Sue and me). 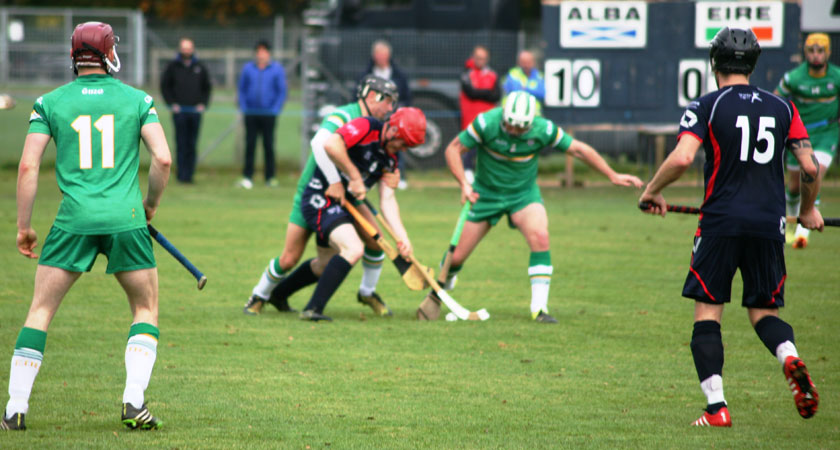 A local expert, complete with green tweedy plus-fours and matching cap, explained that this hybrid clash of the two sports dates back exactly 200 years when two London teams first met. This latest meeting involved a dazzling display of energy and skill from both national teams.

Sue and I joined a good-hearted pitch invasion at the end and she photographed me commiserating on Ireland’s 14-5 loss with three green-shirted athletes. “Oh thanks,” replied one of them, “but we’re Scotland players who have just swapped our tops with your lot!”

Cringingly embarrassed, I fired up Vinnie’s 2.3 litre diesel engine and we headed as fast as the speed cameras would allow up the Black Isle (look out for the small brewery of the same name that turns out a full-bodied dark ale).

Our target was Dornoch, a charmer of a small town, with its nearby blue flag beach and world-class golf course, where we dined sumptuously in the AA Rosette Garden Restaurant at the ritzy Castle Hotel.

Wild camping – if you are discreet and inquire politely – is legal and as widely available on NC500 as it is in rural Ireland, so, after inquiring politely, we parked Vinnie in Dornoch’s peaceful former marketplace, alongside the tree-ringed cathedral where singer Madonna had her son Rocco christened in 2000.

If you do your pre-trip research (we Googled and used our local library), you soon discover that there are stacks of fascinating anecdotes to be had along NC500, involving celebrities old and new.

For example, on your return, you can mention Dornoch and Madonna to your friends in the same breath as a woman called Janet Horne. Suffering senility, she was the last alleged witch to be executed in the British Isles, her traumatic end being marked on a stone in the town and involving being stripped, smeared with tar and burned alive. 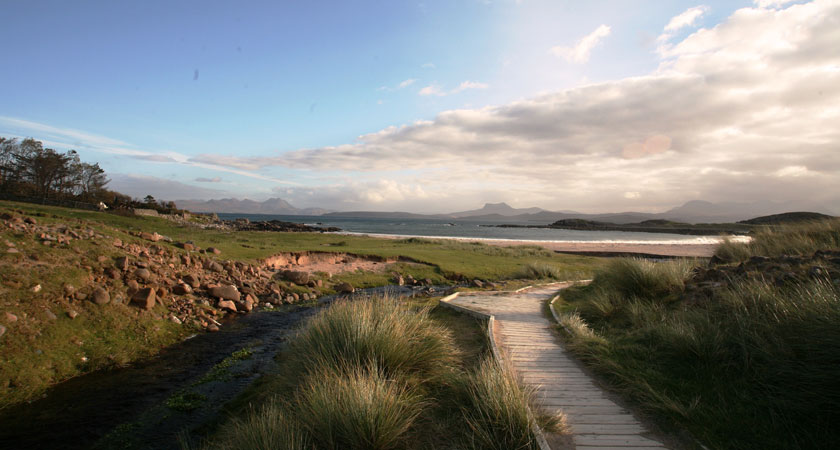 Celebrity-hunting does not particularly rock our boat, but we did find one place bristling with them: Poole House, a historic family guest house on the shores of Loch Ewe, where the owner told us of a past visitor list that includes such luminaries as Sir Winston Churchill, Brad Pitt, John Le Carre and Kate Winslet, the latter said to have performed some remarkably athletic exercises on the secluded lawn.

If food and drink are your thing, then the trip will do nothing for your waistline. We simply muttered “Oh what the heck” and dived into huge plates of freshly caught haddock and chips with panoramic loch-side views at both the Ben Loyal Hotel, in Tongue, and the Kylesku Hotel. 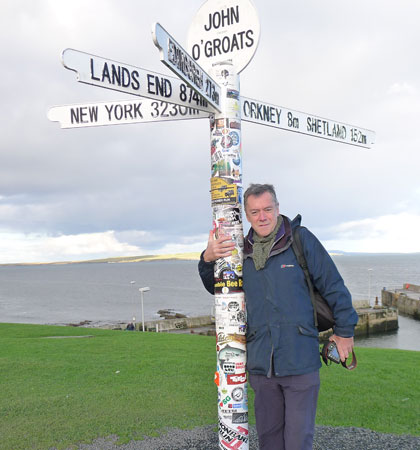 Stopping off in John O'Groats

In readiness for evenings dining in on Vinnie the Van’s adjustable table, we called in at several artisan food places, one of the best being treats chosen at the Isle of Ewe Smokehouse.

To wash it down, we had snifters of Dunnet Bay Distillers Rock Rose gin, which is making huge waves with its unusual flavourings using local and traditional berries and herbs.

Of course, autumn on a drive like this has its many advantages: near-empty roads, golden explosions of wilting leaves at every turn, Highland mists around the hills and glens, magical sunrises and big turf fires.

There are also none of the nibbling female midges that can leave you resembling a measles patient in seconds.

There are accounts of tortuous motorhome convoys and odd driving behaviour along some stretches, around 200 miles of which are single carriageway, with plenty of passing places.

These are occasionally blocked by sheep and Highland cattle, but you may also be sharing the carriageway with suicidal pigs, roaming deer, nosey otters and even the odd red squirrel.

We were lucky to experience four sunny days and only one severe gale, during a beach walk at a completely empty Balnakeil beach, near Durness, after which we returned to Vinnie sandblasted, drenched and looking like we had emerged from a washing machine set on a 1200 rev spin.

So, on two nights, we savoured the delights of staying inside real buildings.

First up was the Natural Retreats luxury apartments at John O’Groats, with the sea just a pebble’s throw away from windows that gazed out at mist-shrouded Stromness Island and other nearby Orkneys.

Next came a family room at the Torridon Inn, where we avoided such energetic activities as walking, mountaineering, rock climbing and kayaking and, after a tender steak dinner, simply snored our way through a perfect night’s sleep. 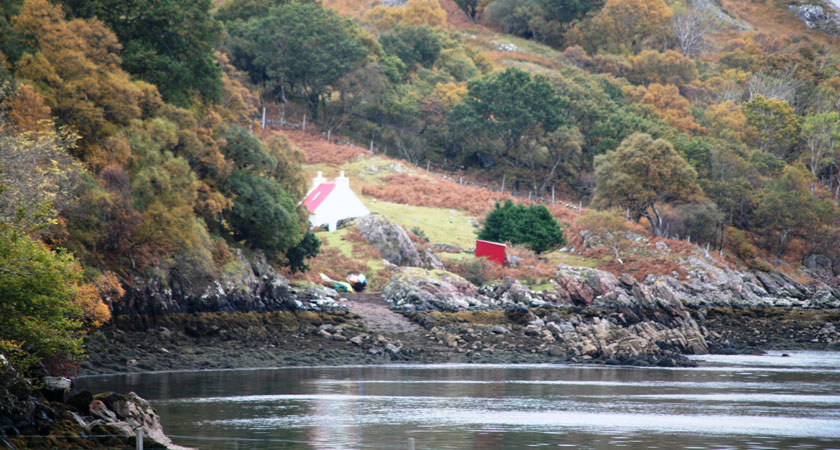 Without the hippy frenzy of Route 66, perhaps the magic of the NC500 is the all-embracing inner peace that is instilled by its huge scenery and the old world charm of the Highlanders themselves.

We met many of these reserved yet friendly people, who have so many parallels with the Irish, from their native Gaelic tongue and dancing to the smell of the turf fires, the landlord Clearances of poor farmers and even the Potato Blight which swept across the sea from Ireland 170 years ago.

Everywhere we went, we felt a warm greeting and that sense of fun which gave us memories galore. It is best summed up in Rabbie Burns’ own words:

In Heaven itself I’ll ask no more, / Than just a Highland welcome.

If you are interested in an NC500 campervan tour, Bunk Campers have a huge fleet of well-equipped vehicles to suit all pockets and needs. They can be booked in London, Glasgow and Edinburgh, or taken by ferry from bases in Dublin and Belfast. Search www.bunkcampers.com or call (Monday to Friday 9am–5pm) 028 9081 3057.

For planning a trip and suggested itineraries, go to www.northcoast500.com. For a stay at the apartments at John O’Groats search www.naturalretreats.com. One-bed studio apartments start at £103 a night. For the Torridon Inn, go to www.thetorridon.com, where bed and breakfast doubles are £120 a night.