Chester boasts plenty of history as one of Europe's "prettiest towns"

CHESTER has just been nominated in a poll by readers of USA Today as the fifth prettiest town in Europe, ahead of the likes of Prague, Budapest and Venice.

Now, I’d never been to Chester before reading this startling information – probably like a lot of you, the city will only have been a signpost for following after arrival in Holyhead. After reaching the turn-off for the old Roman settlement you headed for points further south.

So after remedying this omission by a short visit, did I find Chester as good as the Yanks cracked it up to be?

Well, my first impressions were very good: mediaeval walkways, old Roman walls, quirky pubs, a fine cathedral, interesting restaurants. It also has what’s reckoned to be the most-photographed clock in the world – the ornate Eastgate clock.

I have to say, I like all those things in a weekend jaunt. 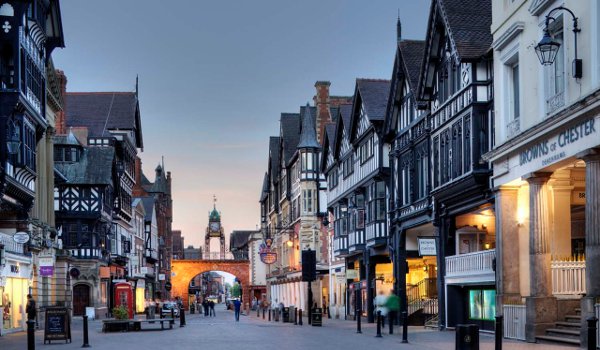 On the one hand, the night-life looked a bit thin on the ground – I was told there were only two clubs of any note, and even they closed fairly sharpish. On the other hand an extraordinarily relaxed atmosphere in the city is helped along by pubs that are lively and friendly, pubs that give you the impression you’re unlikely to be stuck for company.

And, as regards a place for wandering about, stopping off in cafes or tea shops, and contemplating the history of these islands, there can be few better.

What marks Chester out architecturally are the city walls surrounding a mostly mediaeval thoroughfare called The Rows, plus a cluster of black-and-white, half-timbered buildings, and a tangle of laneways with a mix of buildings ranging from Tudor to Victorian.

A footpath runs along the top of the mediaeval walls, passing the ancient entrances to the town including Eastgate, Northgate and St Martin’s Gate – all with their own, usually less than happy, tale to tell.

The walkway is about two miles long, so an easy stroll takes you past King Charles’ Tower, a 13th century fortification. Charles enters the picture because he used this excellent vantage point to survey his Royalist troops, locally engaged in handbags with Parliamentarians. 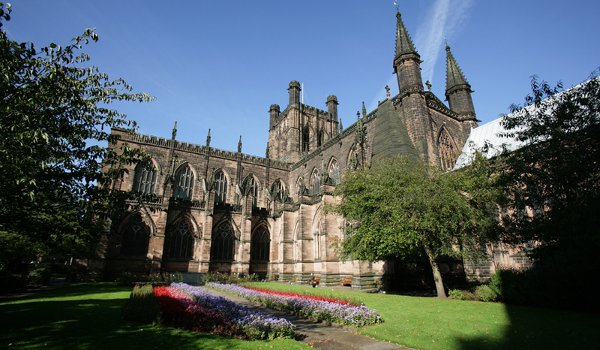 With or without thoughts of England’s Civil War on your mind, today you can use it to look out across the fifth most beautiful city in Europe, official.

Further on round the wall is the Eastgate clock. Despite its reputation as the most photographed clock in the world (although I imagine Big Ben might have a thing or two to say about that next time there’s a clock convention) I had the view to myself.

The site of the clock carries the whole sweep of British history – not including the boring bits like the Divine Right of Kings or joining the various EU treaties.

But most other things. It stands at the original Roman entrance to the town, under which centurions would have filed en route to getting their instructions for further expeditions.

“Right. You lot – head for Scotland. There’s a wall in the way. Sub-contractor name of Hadrian built it. But aside from that, there’ll be no problem. Now, Ireland – let’s see.

"The XII Legion – you can head out there. You can’t miss it. Due west for Holyhead. Actually, on second thoughts don’t bother. We’ll leave Ireland alone this time.”

Chester was basically the headquarters of the Roman civil service in the west of the empire. It has been said that Rome didn’t create a great empire by having meetings. They did it by killing everybody who opposed them. Which to some extent is true - but they certainly had a flair for fine buildings, which survive in this westerly outpost. 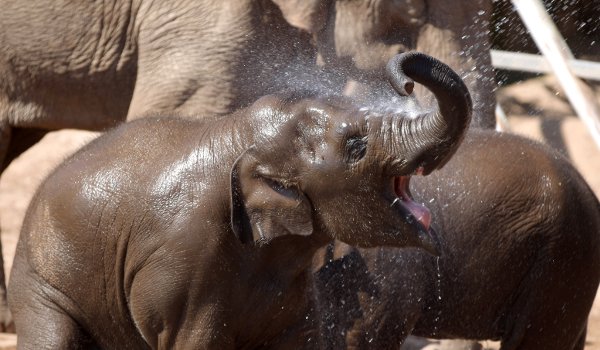 The Roman entrance to Chester was eventually replaced by a mediaeval gate, which would have witnessed plague and pestilence, the vicissitudes of the Civil War, the scourge of Cromwell, two world wars, and just for good measure, the industrial revolution.

In 1899 a clock was added to the top of the gateway to celebrate the diamond jubilee of Queen Victoria. Nearby is the half-timbered God’s Providence House on Watergate Street. Now beautifully restored, it’s said to be the only house in the city to have escaped the Black Death.

Despite its huge and ominous backdrop of history, Chester is no museum piece. It’s a seriously good place for drinking with some truly memorable pubs; if it’s too early for a drink plenty of cafes and restaurants are ideal places for a snack and a chance to watch Chester life drift by.

The city boasts some great museums, some shopping – the afore-mentioned Rows boasts several independent shops in the arcades.

Overall, it’s not too difficult to see how Chester manages to find itself in elite European company. I’ll be stopping off more often on the way up to Holyhead from now on.

WHERE TO VISIT, WHAT TO DO

According to legend, a prehistoric Druid temple – built by the Celts (who also may have arrived via Holyhead) – existed on the site of Chester Cathedral. That was succeeded by a Roman temple dedicated to Apollo; when Christianity became the state religion of Rome in the 4th century AD, the pagan temple probably became a Christian church.

However, the surviving parts of the present structure date back to 1093. Like most cathedrals of that vintage, it bears evidence of its various tenants over the centuries – with all major styles of English medieval architecture in evidence from Norman to Perpendicular.

If you do go, you’ll be in a long line of people who for over a thousand years have marvelled at this great building’s calm and ethereal atmosphere.

Zoos I can take or leave. Today, I know, they do invaluable work in the field of ecology, breeding and conservation. If you are a fan, however, then you could scarcely do better than Chester Zoo.

It regularly appears on any list of the world’s top 10 zoos, and is home to some 11,000 animals living in spacious, empathetically constructed quarters.

Over 100 species are kept as part of a captive breeding programme, with the zoo managing the studbooks (a vital element in conservation) for the likes of the Congo buffalo, jaguar, and black rhinoceros. The zoo is also home to animatronic dinosaurs – no stud book available as yet.

And it’s not just animals – it also features award-winning gardens, with some spectacular horticultural A-listers on show.

Chester has its fair share of Roman ruins. It probably, in the event, got Ireland’s share too. Many historians believe that that had the Romans not quit Britain, Chester was destined to become the capital of the country.

If so, an invasion of Ireland was most definitely on the cards. But it wasn’t to be, and so we missed out on all those nice straight roads.

Today the city is home to the largest surviving Roman amphitheatre in Britain, back then used for military training and entertainment (which you’d probably not describe as light entertainment).

By the way, the Roman nickname for the north British locals was Brittunculi meaning “nasty little Britons” – it’s amazing what you can learn wandering round old ruins.

The Groves riverside promenade runs alongside the River Dee, a walkway since the early 1700s that is now part of a longer Riverside Promenade.

In Saxon times, The Groves probably constituted the main port area. Today this is the best place to take a trip down the river via all manner of vessels - from motorised tour-boats to row boats.

WHERE TO EAT AND DRINK

The Watergates Bar, 13 Watergate Street, has a perfect setting – an old church crypt under The Rows. Generally relaxed during the day, there’s a stunning sun terrace, though not much used at this time of the year bar a few smokers.

It’s an ideal place for indolent lunches that stretch into evening – the hidden snug seems tailor-made for trysts. At night it becomes a good deal livelier with a wide range of cocktails, beers, shooters, spirits and bottles available.

Peep over the salted rim of your margarita and you’ll see Chester’s young, up-for-it, population at play.

The Bear and Billet, Lower Bridge Street, is a recently renovated 17th century tavern within the old walls, this stellar pub features a wide selection of beers – as well as hearty, rustic English fare.

The tavern serves an impressive range of beer from the Sam Smith’s brewery, and is an excellent half-timbered old tavern, ideal for getting half cut in.

Housed in a Grade II listed building, with black and white timbered façade, this is an elegant, luxury hotel inside. There are two award-winning restaurants, most notably Simon Radley at The Chester Grosvenor, which has retained its Michelin star since 1990.

Of course you may have wondered, like myself, just how a French tyre company gets to be such an expert on British cuisine. But there it is – a Michelin star is the globally recognised gold standard for gastronomy, and chefs are rightly proud of ownership of one.

It’s even rumoured that a well-known British chef has all his Michelin stars tattooed on his bottom. Whether the eponymous Simon Radley is similarly decorated, I couldn’t say. But I can tell you that he knows how to handle subtle flavours and fresh ingredients.

A long established four star hotel with award-winning restaurant, free wi-fi, flatscreen tellys (not sure if you can get any other type these days!) and some nice nooks and indeed crannies throughout the hotel where you can curl up with a book and nice glass of cognac.

A boutique city-centre hotel in a historic building with its own secret garden, dotted with, oddly enough, Bedouin tents. Inside, inspired urbanity and outrageously imaginative décor gives this a luxurious, contemporary feel.

There’s a cracking bar downstairs, and the rooms have a fine air of hedonism about them, plus lots of nerdery such as DVDs and flatscreen whatnots.

We’re talking serious swank here. Comfortable, sophisticated and a destination in itself.