HIDDEN TREASURES: Pot luck on a campervan tour of Pembrokeshire

IF great trips are about great stories to take home, then I certainly had one when I tucked into a bowl of steaming shellfish that I had helped to collect from two pristine Pembrokeshire beaches.

There were cockles, mussels, razor clams, prawns and even some exquisite spider crab which had all been cooked expertly by a local foraging legend.

Self-taught Craig Evans has been ‘rummaging’ through coastal beaches and woodlands since he was an eight-year-old in short trousers.

‘It’s like nature’s scratch card,’ he explains as he slides deep in his long waders into another rockpool and, seconds later, pulls out a sizeable spider crab. 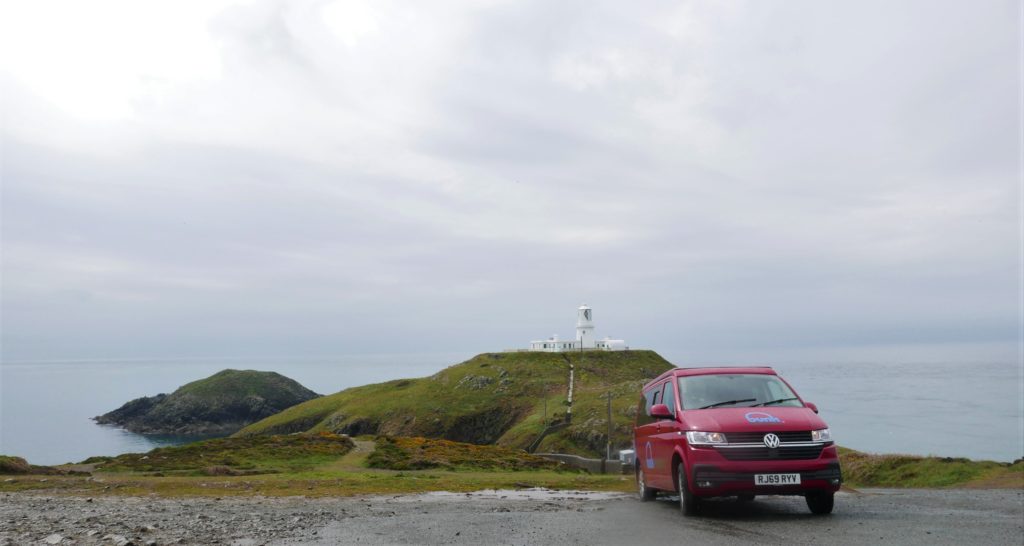 Taking in the scenery at Strumble Head

How right he was. After six hours on one of his regular coastal foraging courses, I will never again look with the same blank eyes at a beach or an adjacent forest.

In fact, I can’t wait to return to all those endless county Mayo beaches where I’ve roamed on visits for years without knowing of the potential harvest beneath my bare feet.

Of course, such a brief education will have taught me just a fraction what Craig, born in neighbouring Carmarthenshire, has discovered over several decades, but it certainly opened my eyes and those of the small group who had signed up for his insights. 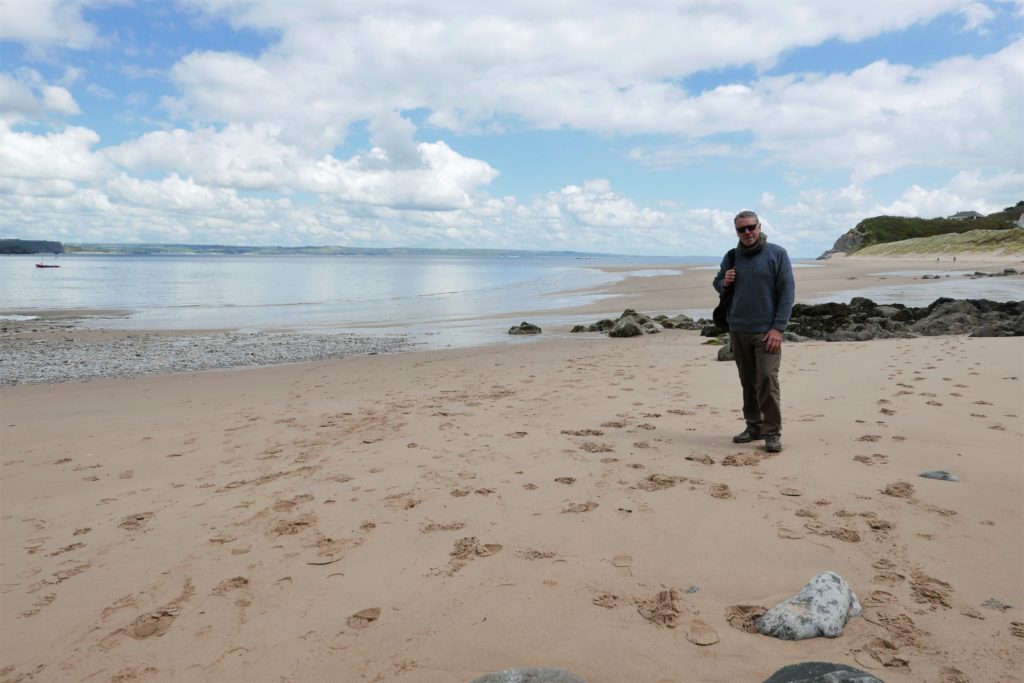 James enjoys an empty beach at the now reopened Caldey Island, near Tenby

We followed him as he pointed to the tell-tale sand ripples and to the most fruitful rock holes at Wiseman’s Beach and along the coast to one of his ‘secret’ spots, where he fears publicity will swamp the shoreline and even bring in commercial foragers with vehicles and tools.

The course is included in the Celtic Routes partnership between West Wales and Wicklow, Wexford and Waterford to encourage tourists passing through these regions of both countries to stop off and try something historic and authentic.

It is a plan to build a story of two nations – Wales and Ireland - separated by sea yet sharing the indestructible bond of Celtic history and culture.

And that promise was certainly fulfilled as my partner and photographer, Sue Mountjoy, and I picked up our virtually brand-new hired Bunk Campers Nomad campervan in Coventry and headed westward to discover some of the secrets of Pembrokeshire’s staggering coastal national park.

Regularly lauded as the UK’s top holiday magnet, this geological marvel has something for everyone from countless sweeping coves and bays, more than 50 clean beaches, pretty fishing villages, unspoilt resorts and the finest coastal footpath in the country stretching 186 miles.

First stop, after a smooth four-hour drive was the tiny hamlet of Wiseman’s Bridge, where the campsite is a stone’s throw from the sandy beach and the popular old inn, with its alluring tables for a cold beer and good food just above the rolling Irish Sea. 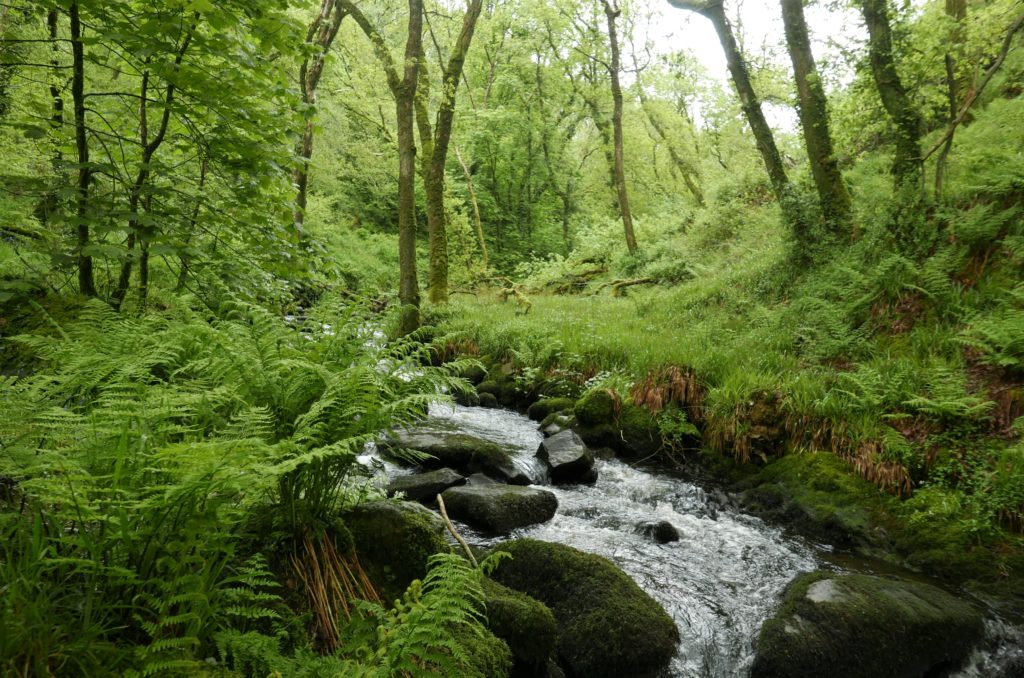 The beauty of a hidden waterfall in Cwm Gwaun Valley

Next morning our journey of discovery continued with the irrepressible Craig, who provided remarkable insights into the history of foraging, the legalities and what and where to find the best in woodland and shoreline.

A self-confessed ‘tide worrier’ he whisked us along at breakneck speed, warning that timing is crucial to get the best beach food before the sea pours in again.

In the woods close to the Saundersfoot Bridge tunnel, he gathered the wild garlic we would use in our al fresco seafood for garnish and he showed us countless wild delights such as Himalayan Balsam with its edible seeds, meadowsweet flowers which make a decent tea and is used to make aspirin and Germolene.

Complete ‘no no’s’ were Deadly Nightshade and Waterdrop Hemlock, which is equally deadly and leaves you fatally poisoned with ‘a sardonic grin on your face’.

There were plenty of grins on the beach later when we tucked into his al fresco shellfish pot, boiled in clean stream water expertly using Carmarthenshire butter with rock samphire on a burning softwood stump, similar to a Swedish candle. 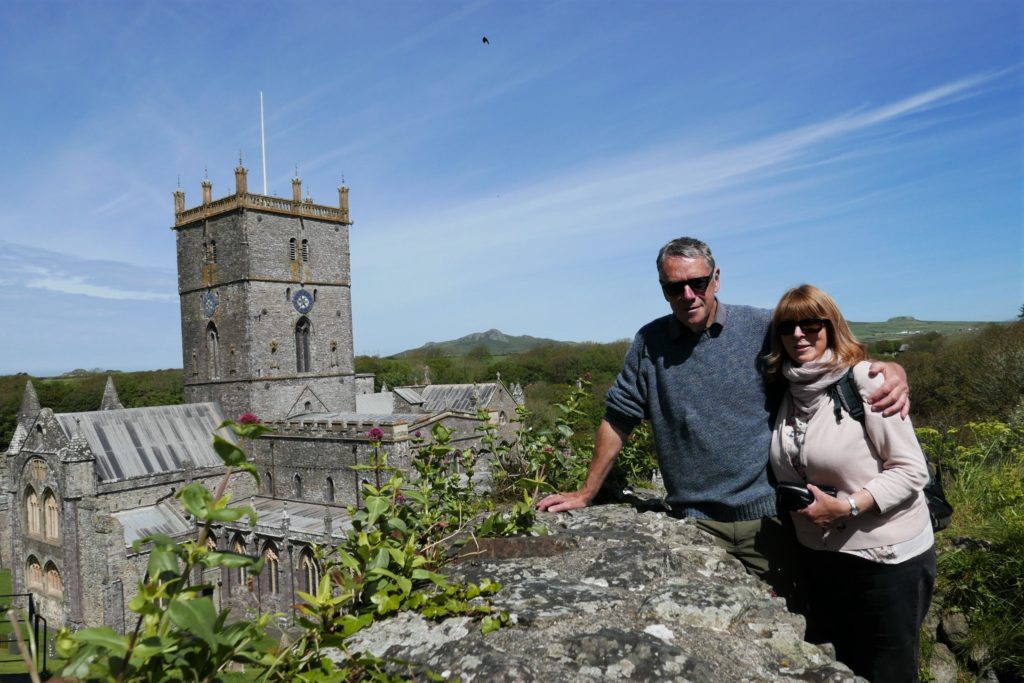 Next day we were heading for bustling and beautiful Tenby for another secret – well, at least, one that has just reopened after pandemic lockdown, Caldey Island, a short boat ride into a world of Cistercian monks and an abbey that sits where Christians have prayed since the sixth century.

There were no monks in view but there was a definite sense of tranquillity and history as we toured the empty beach and made our way up to the small Calvary, with its dramatic view over the bay.

Later in bustling Tenby we had an early evening meal in another lesser-known eatery, Nora’s Kitchen, a Malaysian curry stall, where authentic Nasi Goreng Kampung and Nyonya Lime Chicken Curry are cooked under the roof of the county’s oldest market (chartered in 1290) and in a fabulous Grade Two listed building.

Our journey north took us to Prendergast Woods, for the carpet of bluebells, near pretty Solva fishing village, followed by Britain’s smallest city, 5th century St David’s, (population 1700) for a look at the magnificent cathedral and an amble round the independent shops. 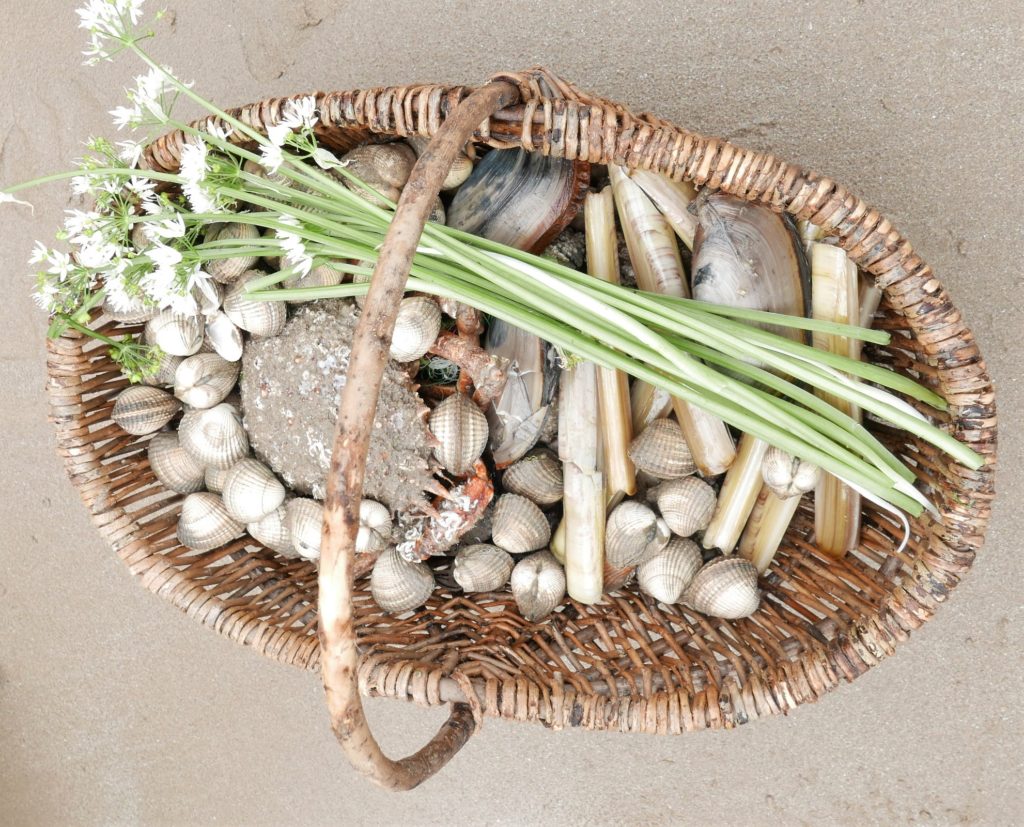 That night we opted for some luxury at the first contemporary art hotel in Wales, the Twr Y Felin Hotel, based in a former windmill, with 100 pieces of specially commissioned artworks dotted around its walls.  A haven of calm, it was just a short walk from St David’s itself and from some of the most stunning of Pembrokeshire’s coastal walking. Dreamy!

After a lively chat with Sarah about the sustainability of insects as a major source of worldwide protein foods, Sue and I sat down to a mixed platter of foods to try.

Of course, Andy stressed that his menu isn’t all about bugs. Indeed, the main ethos of Grub Kitchen is serving freshly-cooked, full-flavoured, local and sustainable food. Plant-based and children’s dishes are always available.

But we had to try. After sampling fried bats in Malaysia, which were crunchy and cooked in sesame oil, we had to try the VEXo Balls, looking like meatballs but using the farm’s award-winning insect and plant protein, which tasted like . . .well . . . decent meatballs. The same could be said of the VEXo Bolognese, although the Spiced Cumin and Mealworm Hummus had dried bugs on top and was very palatable, although quite crunchy. 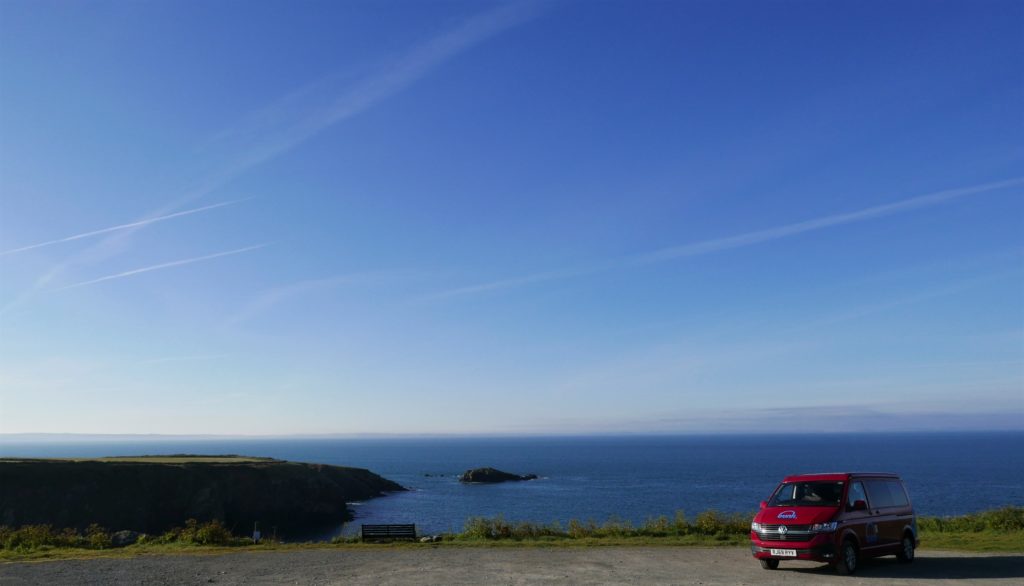 All alone at sweeping Caerfai Bay, near St David's

That night in the van at Fishguard Bay Resort campsite, we half considered a bug feast but opted instead for a proper Welsh supper based on local lamb chops, leeks, local potatoes, and other vegetables, as well as Welsh cakes and that Celtic favourite Bara Brith (speckled bread) flavoured with tea, dried fruit and spices and beloved by Prince Charles, who has even tried the ice cream version.

Our final ‘secret’ came the next day and involved several miles of slow driving along single-track country lanes deep into the Cwm Gwaun Valley, a hidden and utterly unspoilt Ice Age-carved remnant, surrounded by steep, wooded hills, including the Preseli Mountains.

We were there to meet Robert Vaughan, a sheep and Welsh Longhorn Cattle farmer, who was visited three years ago by TV chef Jamie Oliver to cook his renowned mutton on his Channel 4 TV series Jamie and Jimmy’s Friday Night Feast.

Our aim was to witness the reopening of his family’s nearby rural heaven, the Penlan Uchaf Gardens and Tea Rooms, run by his elderly father and mother, Dilwyn and Suzanne Vaughan.

Having also been closed by the pandemic, the three acres site is at the top of a steep hill, where the couple live and have nursed it for three decades, attracting as many as 20,000 annual visitors from across the world in its heyday. 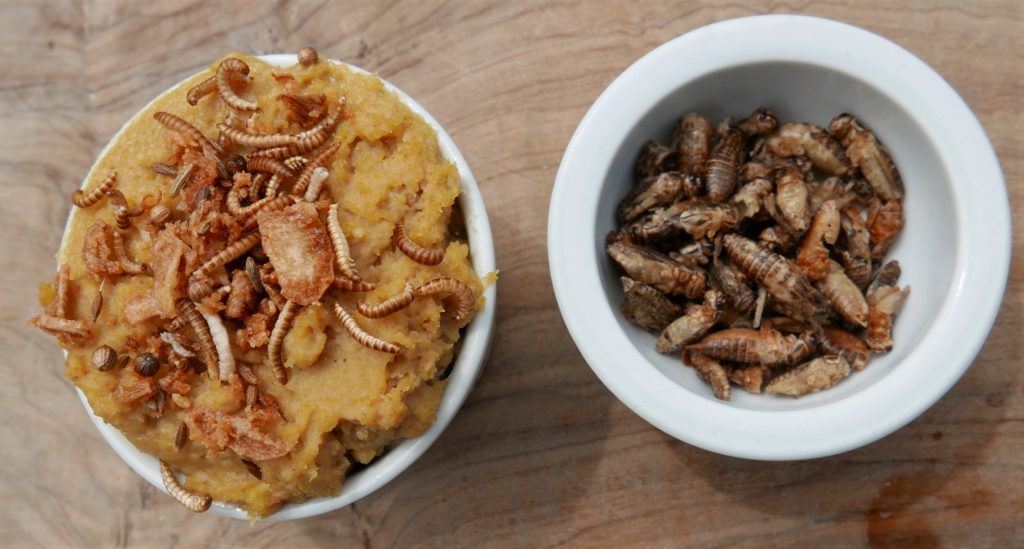 Food of the future at the Grub Kitchen

The essence of the place, according to Dilwyn and Suzanne, is to allow visitors to enjoy the tranquillity and the views, amid the ponds, the wildlife and the natural beauty.

Later, Robert pointed us to another local ’secret’, the twin waterfalls walk which lies, largely hidden opposite his farmhouse a mile or so along the valley, where the water roared amid fallen trees, covered in fronds of lichen and surrounded by carpets of ferns. Magical.

Before we left, we were directed to one of the country’s quirkiest pubs, the Dyffryn Arms, locally known as Bessie’s and run by Bessie Davies’s family since 1845.  The draught beer is Bass, served through a hatch via a jug. The pub celebrated 40 years in the Good Beer Guide in 2015.

And so we ended our ‘secret Pembrokeshire’ tour on a fascinating and idyllic note, in the knowledge that even the most popular and busiest tourist places still have their hidden gems if you look for them.

Bunk Campers are one of the leading hire companies in the UK and Ireland with a range of nine vehicles to choose from, including budget campers and luxury motorhomes. Booking is easy and stacks of information is available to help you choose and operate the vehicle.

We chose one of the Bunk Campers Nomads - a new 4-berth VW T6.1 vehicle which had plenty of space and extras, including motion sensors – a godsend on narrow Pembrokeshire lanes.

We used two sites which were completely different in style and location. Go to www.wisemansbridgeinn.co.uk and www.fishguardbay.com.

The Twr Y Felin Hotel provided a lasting memory of its lofty location and its 100 artworks, which evoke the dramatic landscape of the region. Rooms are £250 a night. Go to https://twryfelinhotel.com/.

For more information on the area, go to www.visitpembrokeshire.com