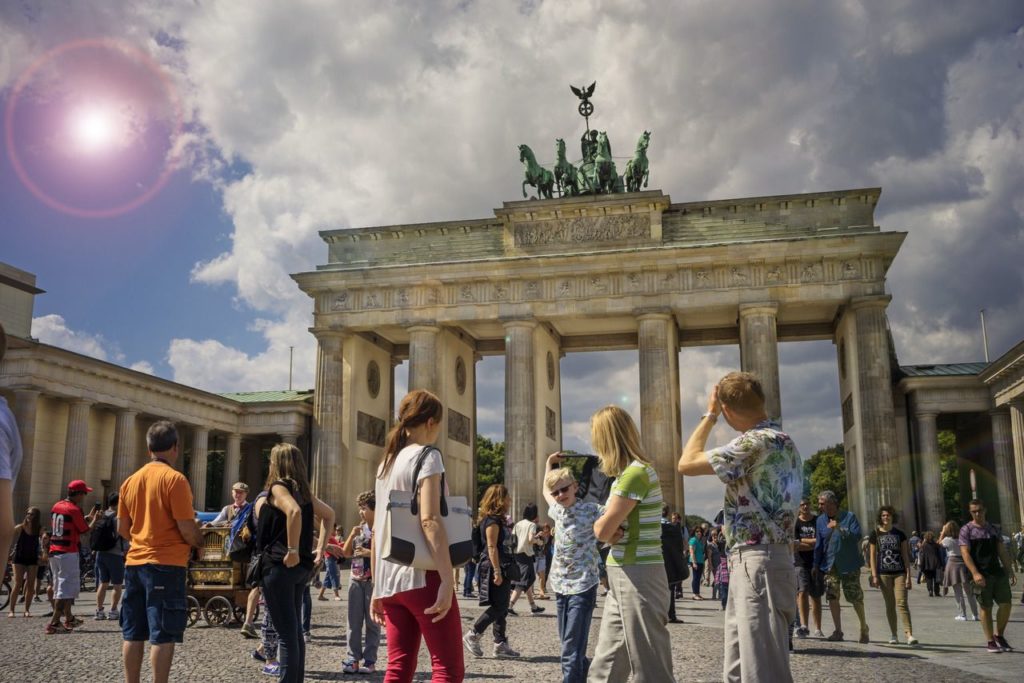 “It’s one of THE best cities I have ever visited and you just have to go!” declared my 18-year-old daughter at the end of her Eurorail trip this summer.

So, I took her advice and booked a weekend in Germany’s capital, Berlin, for our family.

While very much a weekend of sightseeing was planned, we were also conscious that, for our two teen daughters a visit to the Berlin would deepen their understanding of the city which was at the centre of many key events in modern European history.

We stayed at the Hilton Berlin, located in the Mitte (central district). The hotel directly overlooks Gendarmenmarkt, one of the capital’s most attractive and historic squares which houses Berlin’s concert hall and French and German churches.

Amenities include an indoor pool, 24/7 gym, saunas, and while aware that Hilton is a global hotel group, we were particularly impressed with its all-day dining Listo cafe which served foods made up of ingredients sourced regionally; the well-stocked buffet breakfast offering a selection of local produce and the hotel bar offering Berlin’s finest gins.

Since the fall of the Wall in 1989, Berlin has become a visitor hot spot. It boasts hundreds of world-famous cultural and historical sights — see them on foot, on bike, on e-scooter, by boat on the River Spree, or even behind the wheel of a classic East German Trabant.

Berlin is quite flat city, so we opted for a guided bike tour www.fattiretours.com/berlin/.

We took in the Unesco-protected Museum Island with its five world-famous museum buildings and amazing architecture, the impressive Berlin Cathedral — the capital’s largest church, Berlin’s TV Tower, the city’s most visible landmark at 368 metres high, and Checkpoint Charlie, the famous crossing point between East and West Germany. We then cycled on to the Reichstag, where the lower house of Germany’s parliament sits.

After that it was the Potsdamer Platz, one of Europe’s busiest squares in the Weimar era, and Brandenburg Gate.

Led by Tom Williamson, a trained guide and historian (he also does private tours www.yourberlintourguide.com), we spent three hours learning about the series of events that culminated in the final German surrender. It was fascinating to visit memorials to those who opposed the Third Reich and hear about their bravery. The tour also stopped at one of the original above-the-ground bunkers Hitler ordered to be built, each of which was intended to house 4,000 Germans during the war, and ended at the site of Hitler's former underground bunker where he died on 30 April 1945.

All four of us were really impressed with The Topography of Terror history museum www.topographie.de/en/exhibitions/topography-of-terror/#c1069. Built on land once occupied by the former Nazi Secret Service and Gestapo Secret Police, it is now an indoor and outdoor museum with a section of the 13-foot Berlin Wall visible to one side. Admission is free and its excellent audio guide (bring headphones if you remember) takes visitors around the exhibition that focuses on the SS and police during the Third Reich and the crimes they committed.

One of our family’s favourite afternoons was spent in the German Spy Museum www.deutsches-spionagemuseum.de/en. It tell the story of 3,000 years of espionage from past to present, boasts some seriously fun interactive hands-on exhibits ranging from unmasking liars and finding bugs to cracking the safe and laser mazes. It was the only museum we had to pay for but was well worth it.

Berlin is known for its art scene and the East Side Gallery located in the Friedrichshain district is one of the most visited in the capital. A 1300m section of the Berlin Wall is now the longest open-air gallery in the world featuring more 100 different paintings from artists. It is also the longest continuous section of the Wall still in existence and is worth a visit in the day. 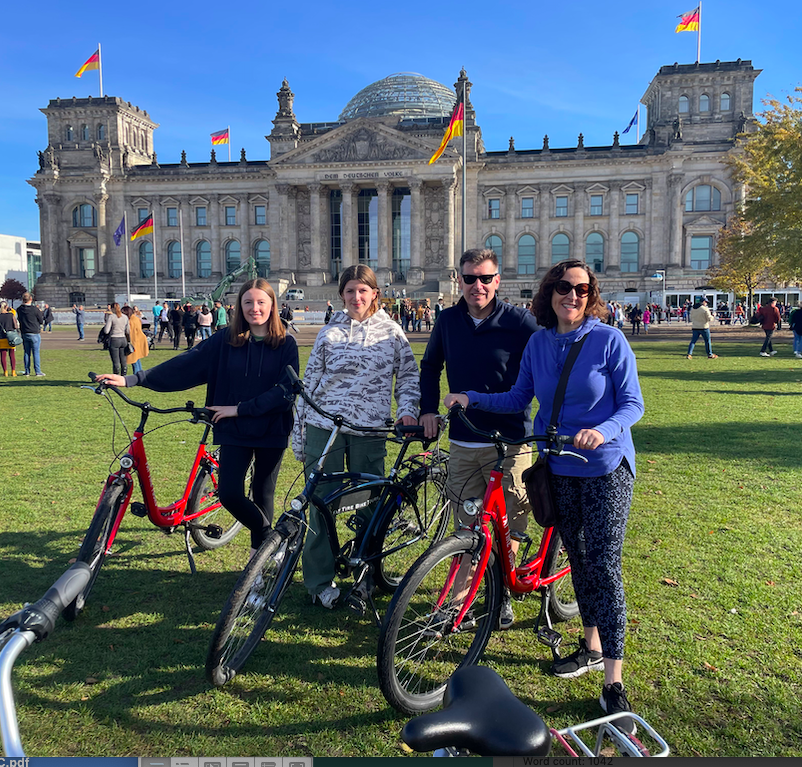 The Boyle family at the Reichstag

Berlin has a diverse choice of food and during our stay we ate at restaurants and cafes serving Bavarian, Korean, Turkish and Italian dishes. It is definitely a city for meat lovers although we did find most accommodated a non-meat eating teen in our party. The thriving city square of Hackescher Market is a great spot for lunch and dinner — try 1840 www.berlin-1840.de for hearty and traditional food, beer optional.

Umami umami-restaurants.de on Bergmannstrasse is a great Vietnamese restaurant with chilled vibes, and if you head to the Sunday flea market at Mauerpark in Prenzlauer Berg, Gosu www.gosuberlin.de serves excellent Korean street food (the fried chicken with chilli sauce is a must) and Café Anna Blume cafe-anna-blume.de is a great spot for brunch.

While we did not get to experience the Berlin’s world-famous clubbing scene given we had two daughters in tow, we hired a babysitter for a few hours one evening and discovered one of Berlin’s best independent bars, Bellboy (bellboybar.com), which is hidden on the ground floor of the Hilton Berlin. It is not really a bar, more a wonderland for adults, where the experience starts as soon as you enter through a curtained doorway. The cocktails – which can take up to a year to end up on the menu – are sublime and presented in the wackiest of ways. Book a table for a great way to end a brilliant weekend in Europe’s coolest cities. 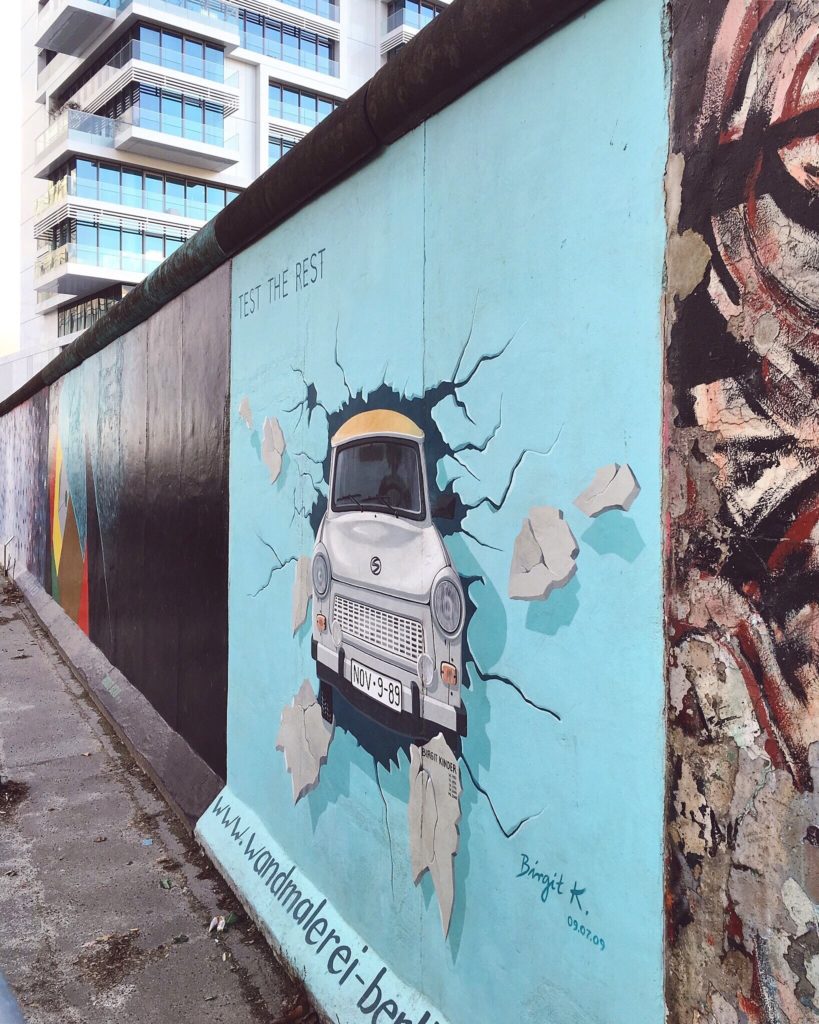 Prices from €249 for a double room or €288 including breakfast