The marvels of the Marble City

First the poet Edmund Spenser visits Kilkenny, writes the Faerie Queene and describes the city as ‘fair and beautiful’; then Condé Nast magazine, only some four centuries later (last year, in fact), nominates Kilkenny as the 9th friendliest city in the world.

To see if poet and publication are right, I decided to do a bit of investigating, and so headed for the Marble City.

First a spot of background: Kilkenny’s history stretches back to the 5th or 6th century, an early Christian settlement founded by followers of St Canice – hence the name, Cill Chainnigh, or in English, Kilkenny.

The city retains more of its mediaeval character than any other Irish city – two imposing cathedrals and an extremely impressive 12th century castle overlooking the River Nore put it right up there with the very finest of Europe’s cities.

And of course Kilkenny’s nickname, the Marble City, is a tribute to the very attractive local stone – which in fact isn’t marble at all, but carboniferous limestone.

But “the Carboniferous Limestone City” doesn’t sound terrific, and as for the lyrics of Carrickfergus, forget about it. “But in Kilkenny, it is reported, they have carboniferous limestone, as black as ink...” No, the Marble City it is.

Kilkenny hasn’t always been such a free and easy place as placed it at the top of Condé Nast’s chumminess chart in 2013.

The sixties in Kilkenny were a turbulent time – with long hair banned, and goodness knows what else. Now, we’re talking about the 1360s here, not the 1960s. In 1366 the Statutes of Kilkenny were brought in to chasten English settlers who found the native ways very much to their liking and had become “more Irish than the Irish themselves”.

The sanctions thus introduced included a ban on hurling (a very unpopular move in Kilkenny, as you might imagine). “Do not, henceforth,” the statute went, “use the plays which men call horlings, with great sticks and a ball upon the ground, from which great evils and maims have arisen....” And we’ll all drink to that.

The Statutes weren’t too keen on the local entertainment scene either: “Pipers, story tellers, bablers, rimers, mowers, nor any Irish agent shall come amongst the English.” 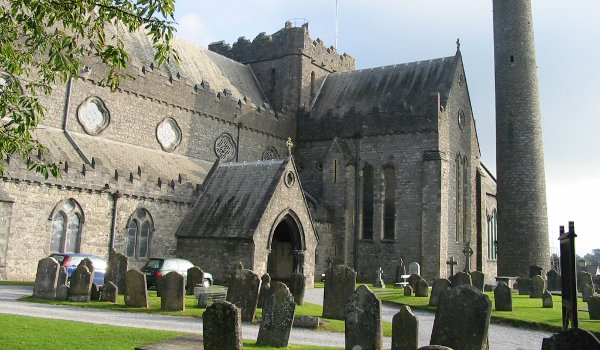 The Cathedral Church of St Canice

Little did the lawmakers know that in less than 700 years, the Kilkenny comedy festival would make a complete monkey’s out of these stern-faced laws.

The Sky Cat Laughs Comedy Festival Kilkenny is widely regarded as the finest small comedy festival in the world. It’s largely held in Kilkenny’s pubs, and the atmosphere is certainly geared towards having a laugh and getting to know your fellow pub-goers.

This year it runs from May 30 to June 4, and features the likes of Andrew Maxwell, Dylan Moran, Eleanor Tiernan and Fred MacAulay, Kevin Bridges and Jimmy Cricket.

The Arts Festival is similarly lauded as one Ireland’s finest, with a freewheeling atmosphere being one of its hallmarks. This year (August 8-17) the programme features music (from classical to traditional, and most stops in between) literature, visual art, street theatre and craft.

Speaking of conviviality, we now turn to the pub scene. Kilkenny’s hostelries, of which there are many, are under-pinned by a brewing tradition that stretches back to the 14th century.

As ever, the monks were at the centre of the licensed victualling trade (unlicensed back then, as it happens), brewing ale and saving souls.

However, commercialism soon reared its lucrative head, and Smithwick’s was founded by John Smithwick in 1710 in St. Francis Abbey Brewery. Today this is Ireland’s oldest operating brewery, situated on the site of the old Franciscan Abbey – tours of the brewery are available.

Today Kilkenny’s pubs are bucking the trend of most Irish pubs, and are mostly thriving, serving the local brews as well as everything from gin to champagne. Estimates vary as to how many pubs the city actually has – but it’s probably between 65-75.

So, that’s one for every 300 inhabitants, and sometimes it seems as if all those inhabitants regularly show up on any given night.

Kilkenny grew from a monastic settlement in early Christian times to a thriving Norman merchant town in the middle ages, and has now entered a new era in the 21st century as an important creative centre, a cultural focus for artists from across Ireland – and of course, one of the friendliest places in the world to enjoy a pint. Official.

Kilkenny Castle is one of the great castles of the world. A 12th century fortification remodelled in Victorian times, you can tour the inside of the old grey building, walk in the gardens or visit the art gallery.

The Castle regularly plays host to exhibitions and events. Currently taking place (until October 26) is the Morpeth Roll Exhibition – basically a farewell card to the popular Chief Secretary of Ireland, Lord Morpeth, who left Dublin in 1841.

The Roll is signed by 160,000 people including the likes of Daniel O’Connell – in recognition of Morpeth’s goodwill towards the Catholic population, and his help in advancing Catholic politicians.

St Mary’s Cathedral, aka the church of St Kieran and the Cathedral of the Assumption, is Kilkenny’s Catholic cathedral, and the newer of the city’s two bishopric seats.

A 19th century Early English Gothic design it is believed to have been modelled after Gloucester Cathedral by its designer William Deane Butler.

Made from the local Kilkenny ‘marble’  - in actual fact a type of limestone  – it bucks the trend of most Catholic churches in Ireland in that it is situated on the highest point of the city.

Usually this is an honour granted to the Church of Ireland Protestant church, as laid down in the bible, and measured by the Holy Tape Measure of Antioch or some such. 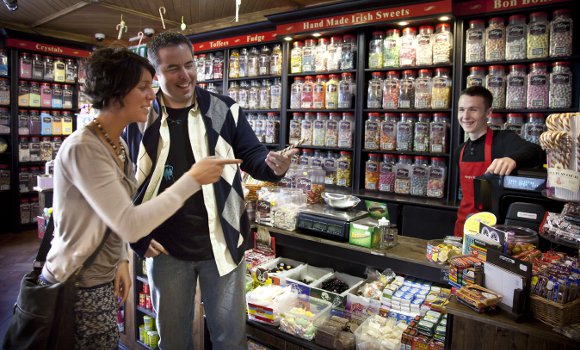 The Cathedral Church of St Canice

Along with its ancient round tower, Kilkenny Cathedral has been a landmark round these parts for the some 800 years, although there has been a church on the site since the 6th century.

The 9th or 10th century Round Tower, the oldest standing structure in Kilkenny and built to withstand Viking raids, today offers the more peaceful option of providing terrific views of the city. You can climb to the top for a 360 degree, 24 carat, 2000 megabyte view of the city and surrounding countryside.

During the 1960s the Irish Government established Kilkenny Design Workshops in Kilkenny Castle’s 18th century stable yard. A group of designers and crafts workers from around Europe set up shop here.

This is now the headquarters of the Irish Crafts Council, and home to the National Craft Gallery (www.nationalcraftgallery.ie) one of Ireland’s cutting edge venues for contemporary arts and design.

Currently on show (until October 16) are two exhibitions exploring costume. Behind the Scenes and Future Fashion explore fashion, craft and the theatrical both on the stage and on the catwalk. Everything from how the Abbey Theatre (Ireland’s leading theatre) designs its undergarment for its performers, to the innovators of fashion and sculpture.

Adjacent to the National Craft Gallery is the Kilkenny Design Centre (www.kilkennydesign.com), offering a huge range of Irish-designed goods for sale, including home textiles, china and crystal, Irish knitwear, jewellery, pottery and glass.

Back in the 13th century the Franciscans established an Abbey, with its own well, on the banks of the River Nore.

Whilst brewing and barley cultivation are recorded in Irish Annals from the mists of time, the strong brewing tradition that exists in Kilkenny started with these monks who would have brewed their own light ale for their visitors, using water from St. Francis’ Well.

The St Francis Abbey Brewery has tours for €10, which includes a complimentary tasting in the brewery’s atmospheric Cellar Bar.

This fine, four-star boutique hotel on the bank of the River Nore, is set in its own courtyard, in the middle of Kilkenny’s  mediaeval winding city streets, not far from the Tholsel (or toll-gate). The hotel is overlooked by the Castle – but to be fair, most things are in Kilkenny.

The River Court is currently offering a two night package deal: 2 nights B&B (full Irish breakfast) with gourmet lunch in The Terrace Kitchen from €115.00 per night.

A four star, luxury hotel with spa and wellness centre.

WHERE TO EAT AND DRINK

To call Clere’s Bar an institution would be something of an understatement. It is home to live music – from rock to traditional - comedy, theatre, a huge choice of beers, stouts and whiskeys, and excellent pub food.

This could be a key destination to conduct empirical investigations into the friendliness of the Kilkenny locals.

With a history dating back to 1263, Kytelers Inn is one of the oldest hostelries in Ireland. Named after Alice Kyteler the bar’s founder, her legal problems regarding witchcraft in the 14th century led to her (or perhaps one of her employees) being burned at the stake.

Today with all thoughts of sorcery banished, the pub is a haven for traditional music, storytelling, entertainment of all types of craic. 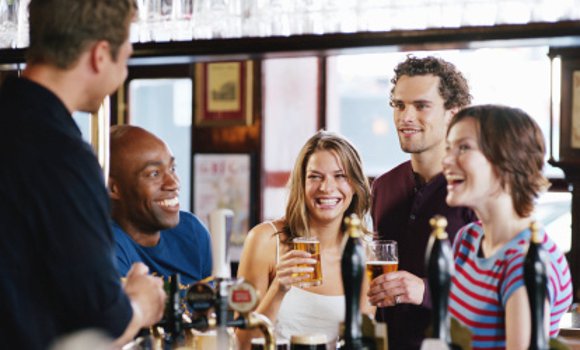 Situated 200 yards from the Castle, this ace restaurant (and guesthouse) has earned its reputation as one of the best places to eat in Ireland. Located in the heart of the medieval city with private parking, it’s within walking distance of all Kilkenny’s best sights, bars and restaurants.

Good value bistro-type restaurant in the heart of Kilkenny. Three courses for e25 is a bargain for a city-centre eaterie.

Expect the likes of eggs Florentine-poached eggs on toast with fresh spinach and  hollandaise sauce, or fillet of salmon, roast butternut squash, couscous, and yoghurt dressing.

10 great attractions to seek out in Northern Ireland