Bill Clinton warns against BREXIT for the North of Ireland's sake

THE NORTH of Ireland will get “whacked” if Britain leaves the EU, Bill Clinton has warned.

The former US President made his prediction while accepting a lifetime achievement award at the 2016 Irish America Hall of Fame event for his “role in bringing peace to Northern Ireland”. 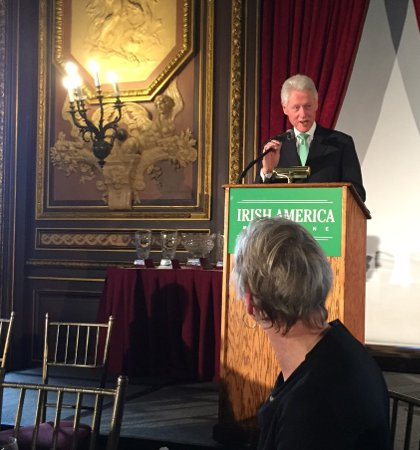 He also gave the keynote speech at the magazine’s event, held at New York’s Metropolitan Club.

“It’s Northern Ireland that will really get whacked if Britain withdrew from the European Union,” he said.

“And I hope they don’t because it’s too easy to believe that the only solution to the problems in the world is to hunker down,” he added.

The former US leader was the first sitting president to visit the North in 1995.

He returned twice more during his presidency and visited again in 2014.

During his speech at the honorary luncheon held on Wednesday, March 30, he also paid tribute to the legacy of the 1916 Proclamation of Irish independence, calling it “a document that says that Ireland will be established for all people who believe in freedom in constitutional government without regard for their religion or their race or background.”

He added: “In other words, it calls for what we have been working for for the last 20 years and what the Irish have largely achieved through great difficulties. And the only thing that works in an interdependent world [are] inclusive economics, inclusive societies, inclusive governments. Nothing else over the long run is sustainable.”

The event also saw four new inductees, from the military, arts and philanthropic sectors, welcomed into the Irish America Hall of Fame –  namely Col. Eileen Collins, the first female space shuttle commander; former chairman of the Joint Chiefs of Staff Gen. Martin E. Dempsey; essayist, novelist, reporter, and columnist Pete Hamill; and Edward J.T. Kenney, who was honoured for his role in the Peace Process and work with the Concern Worldwide U.S. charity.