A SUCCESSFUL Irish entrepreneur who is a major player in the recruitment industry has given back to his former high school.

Kevin Coyle recently showed his support for St James Catholic High School in north London, which he attended more than 20 years ago, by donating £10,000 to allow them to purchase a new minibus.

Since leaving the school the Irishman has gone on to become one of Britain’s leading recruitment consultants.

He has built several profitable companies over the years, including Coyle Personnel Plc and Mayday Healthcare Plc, both with head offices based in Harrow.

Mr Coyle owns five other recruitment firms; although his largest remains Coyle Personnel Plc - which was established in 1988 and currently has consultants located in 11 regional offices across Britain.

The entrepreneur made the donation under his company’s social responsibility charter, after being contacted by St James’ Head Boy Joe Fay.

“A few months ago I was contacted by Joe Fay, to see if I could help with making a contribution towards St James’ fundraising effort to purchase a new minibus for their sports department and without hesitation, I said I would,” he told The Irish Post.

“I have very fond memories of this school and I have nothing but good things to say about it,” he added. 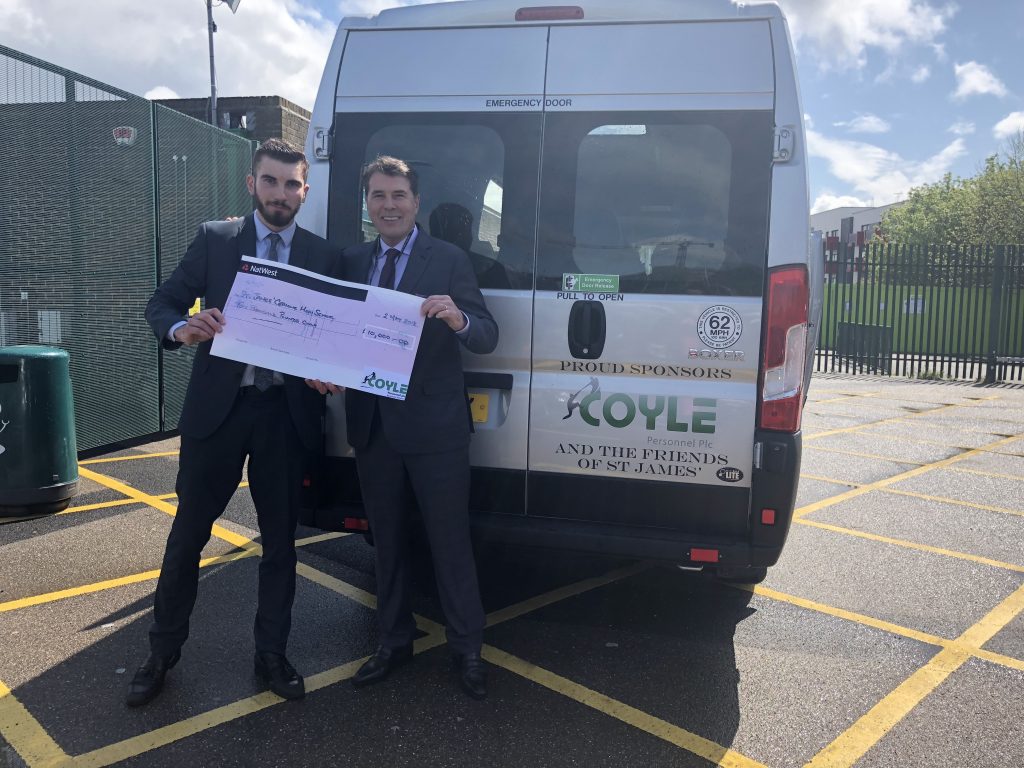 Joe Fay, who is determined to strengthen links between the school and its alumni, has so far managed to raise £18,000 in donations for the school through reaching out to its former pupils.

“At the start of the year I set myself the goal of developing our alumni so that we could further develop our sports teams and presence within the community,” he explained.

“I had a meeting with our school council and vision team in September, and told them about my plans. “Within five weeks of the meeting I had raised over £18,000 through our alumni.”

He added: “Everyone at St James was absolutely amazed and delighted to hear of the donations we received, especially Kevin’s donation, which enabled us to purchase the minibus - which will make a huge impact on our students’ lives, as now we have the ability to develop activities and outings that we have, until this point, put on hold.”

Head of PE at St James’, Lee Riley said: “With Mr Coyle’s support we have been able to reinforce our image as a school which has always put a strong emphasis on the importance of young people partaking in sport.

“We look forward to keeping in touch and hope that some of his company’s representatives can come down and watch some of the sporting events we will be taking part in, later this year.”

Located in Barnet, St James’ Catholic High School has welcomed many Irish students and staff members over the years.

As well as Mr Coyle, its alumni includes Mick Crossan of Powerday Plc, Seamus and Dermot McGinley of the McGinley Group, Daniel Nolan of the Toureen Group and Phil Munnelly of the Munnelly Group.