When I was nine-years-old, I backed out of my school triathlon at the last minute.

The entire week leading up to it, I was a nerve-jangling mess, and about half-an-hour before it was due to start, I went over to my mum - who was there to cheer me on - in floods of tears and told her I wasn’t feeling well.

She knew I was a competitive little boy, and could see right through me. I wasn’t unwell, I was just very, very nervous. Nonetheless, she smiled, reassured me that everything was OK, and we went home.

I was the tallest kid in my school year, I was very active, and I was great at sport. My game was football, but I was also the fastest runner, the strongest swimmer and would fancy myself against my peers in any sort of physically competitive one-on-one situation.

Essentially, I was used to being the best. *I sound like a delight, don’t I?

But about two months prior to the triathlon - an event I presumed I’d win comfortably - a new boy joined the class. An athletic, go-getter from South Africa named Chad Schofield.

He was a threat to me, so for a few weeks I scoped him out on the football field during lunchtime, and quickly realised he was good... very good. He was as fast as me, he was obsessed with sport like I was, and he probably presumed he’d win the upcoming triathlon comfortably too. His name was ‘Chad’ for goodness’ sake, of course he was going to be a threat! (He actually went on to become an international jockey - look him up!)

Victory was no longer guaranteed, and that terrified me.

I decided I couldn’t risk it, so I withdrew. I wasn’t a narcissistic child. Sure, I enjoyed being the centre of attention, but which nine-year-old doesn’t? I just felt in that moment that I couldn’t face the prospect of being second best. So I eliminated the possibility altogether.

By pulling out of the Olympics last week, American gymnast Simone Biles had what I call her ‘Chad Schofield Moment’. 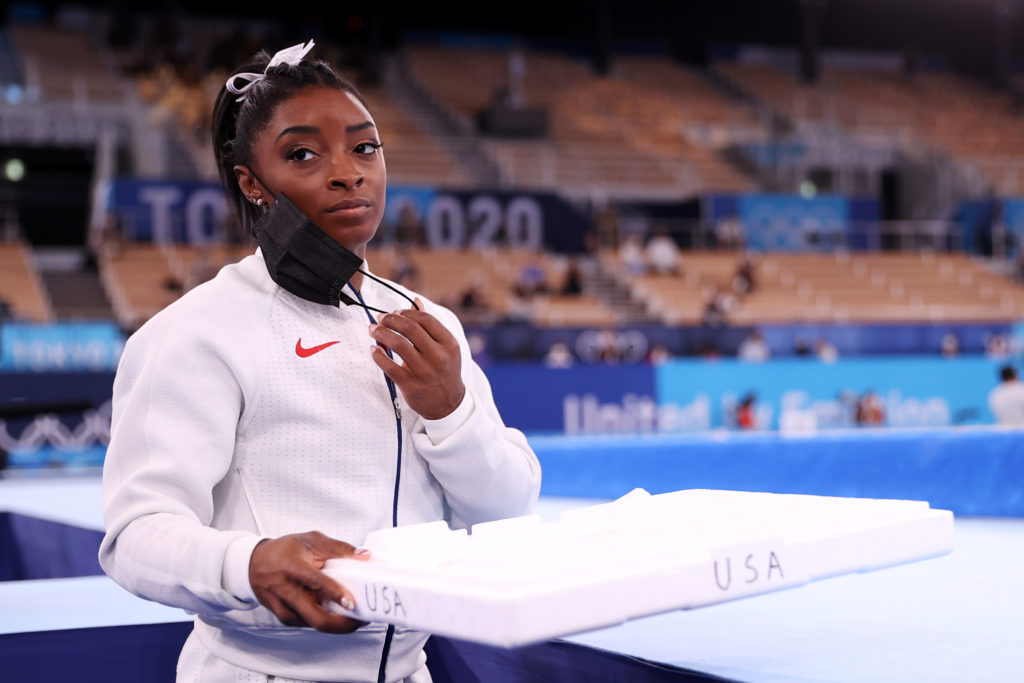 Simone Biles shortly before she withdrew from the Olympics.

The 24-year-old, touted by many as the very best in the world, was expected to help Team USA land a glut of Gold medals this summer, but after making a poor start in which she suffered a number of technical mishaps, she decided to quit.

What's more likely, is that Biles was used to being the best, and her ego couldn’t take the idea of that no longer being the case, so she eliminated the possibility, just as I did. Look, maybe she’s telling the truth about her mental anguish, and maybe she isn’t, but that's not really the point.

The point is the world shouldn’t be congratulating her.

For the record, I’m not dismissing the importance of mental health or anyone who struggles with theirs. It’s fantastic that, as a society, we’re beginning to recognise the impact mental health has on everyone’s lives, but why are so many people pretending like Biles’ situation isn’t a massive problem not only for herself, but for her supporters, her teammates and her country?

In the wake of her announcement, many of her fellow Olympians branded her "a true champion", while her sponsors congratulated her for having the "strength" to put her mental health first.

Sorry, but none of that makes any sense.

After all, everyone has issues with their mental health. Every single person. Every day, people do things they’d rather avoid, because like it or not, difficult things happen in life, and existence is bloody tough sometimes.

There’s plenty of talk of ‘privilege’ right now, and most people could only dream of having the privilege Biles enjoys. She has millions of dollars in the bank and four Gold medals on the mantelpiece. She can afford to quit. She can afford to put her mental well-being before everything else. The vast majority of us don’t have that luxury, including - notably - her teammates, who she very much left in the trenches after pulling out of the women's artistic team all round final.

Following a tough start at the Games, Biles found herself in a situation she won't have been accustomed to. She's used to being the best, and probably hasn't needed to be that resilient until now. She said it herself during an interview with Piers Morgan two years ago, that she didn't even need to be on top of her game to win.

But now she's discovered she isn't as indestructible as she thought. She's capable of making mistakes, and she - like all of us - can lose. She should be embracing this new challenge, rather than avoiding it like a nervous nine-year-old.

Based on last week, I don't think Simone is much of a Sylvester Stallone fan.

What she is a fan of, it seems, is the notion that you can quit if things get a little tough - an attitude which is as unhealthy as it is unrealistic. After all, we aren’t all multi-millionaire Nike-endorsed Olympic prodigies. Ask yourself, would Biles have withdrawn from the Olympics in 2016 under the same circumstances? Y'know, before all the money, and all the medals and the security that comes with them? Who knows. But in all likelihood, she’d have stuck it out, just like her medal-barren US teammates Sunisa Lee, Jordan Chiles and Grace McCallum have done.

Sure, dealing with pressure is difficult, but there isn’t an elite sportsman or woman alive who doesn’t have to handle an Olympic-sized-swimming-pool amount of it on a weekly, daily or even hourly basis. We shouldn't necessarily demonise those who decide to quit, but nor should we pretend as if resilience and mental strength aren’t important things to instil in a person, particularly elite-level athletes.

If you can’t handle the heat, get out of the kitchen, and don’t pretend the kitchen shouldn’t be hot in the first place.

Which brings me to Naomi Osaka. 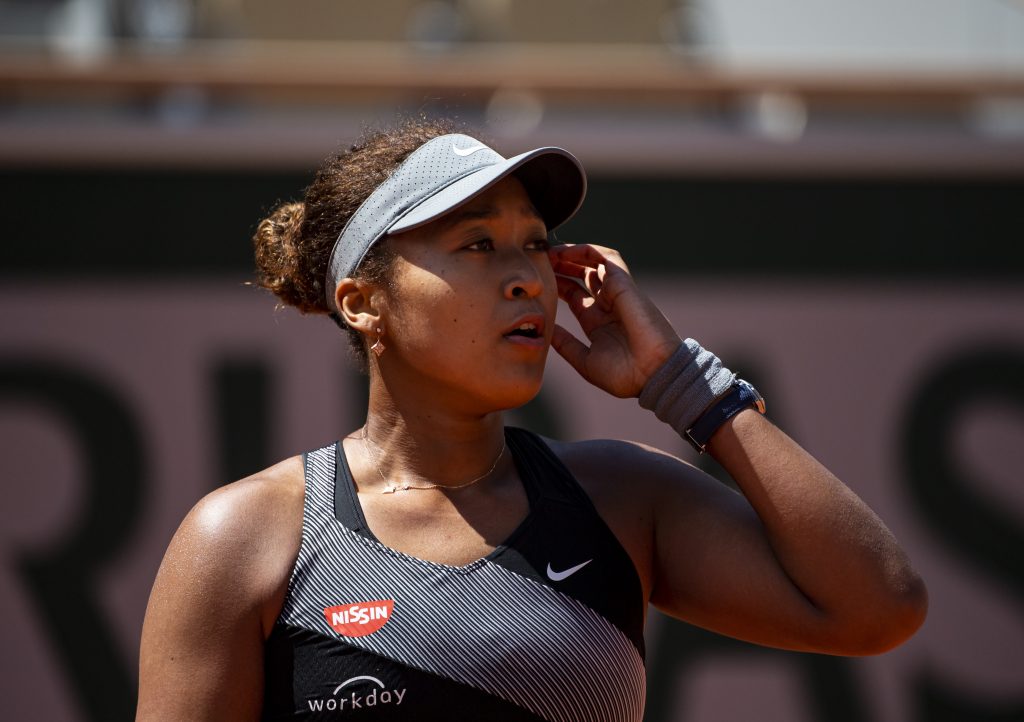 The Japanese tennis star, who grew up in the States, made international headlines in June after refusing to carry out her media duties ahead of the French Open. She was fined $15,000 for the infraction and was threatened with expulsion from the tournament. A day later, she withdrew - and would later withdraw from Wimbledon - citing that good old get-out-of-jail-free card - 'mental health concerns'.

For the non-tennis fans out there, Osaka is the sport’s next big thing. She’s only 23 and has already won four Grand Slams, but has notably struggled on clay surfaces. She explained, after her withdrawal, that being asked questions about her inability to replicate her tremendous hard-court form on clay was a threat to her mental well-being, and even described routine press conferences as 'outdated' because they can make athletes feel 'vulnerable'.

What a load of nonsense. Ladies and gentlemen, this was Naomi Osaka’s ‘Chad Schofield Moment’.

For context, Roger Federer and Novak Djokovic - two of the greatest tennis players of all time - have won 40 Grand Slams between them. Only three of those have been on clay. Three. Pete Sampras, the most successful male American player in history, never won a single Grand Slam on clay. Neither did John McEnroe, Boris Becker or Jimmy Connors. The French Open also eluded Venus Williams, Lindsay Davenport and Martina Hingis, while just three of Serena Williams’ 23 Grand Slam wins have come at the French Open.

Just about every top professional performs worse on clay compared with other surfaces. They all face the same 'tough' but perfectly legitimate questions Osaka has faced, and they all get on with it.

Osaka is basically spoiled. She thinks the rules shouldn’t apply to her because she’s the best. She’s quite happy for the press to be all over her when she wins, but she wants them out of her face when she’s not playing well? That’s not how it works, I’m afraid. Particularly as she has the media to thank for being the highest-paid female athlete in the world right now.

Like Biles, she's used to being the best, but on clay surfaces that isn't the case. In order to rectify this, she demanded special treatment and an unfair advantage, and happily exploited modern-day over-sensitivity towards mental health to get it.

Osaka wants the world to adapt to her, not the other way around. She can’t handle the heat, yet is demanding the temperature be turned down in the kitchen. Now that is narcissism.

When that didn't work, she quit.

Like Biles, Osaka is in an unbelievably privileged position. Ask yourself again, would she have withdrawn from the French Open and Wimbledon had she not already won four Grand Slams and wasn’t earning a reported $60 million a year? The 23-year-old won’t need to work another day in her life, so she can afford to try and take the easy way out, and cut corners. 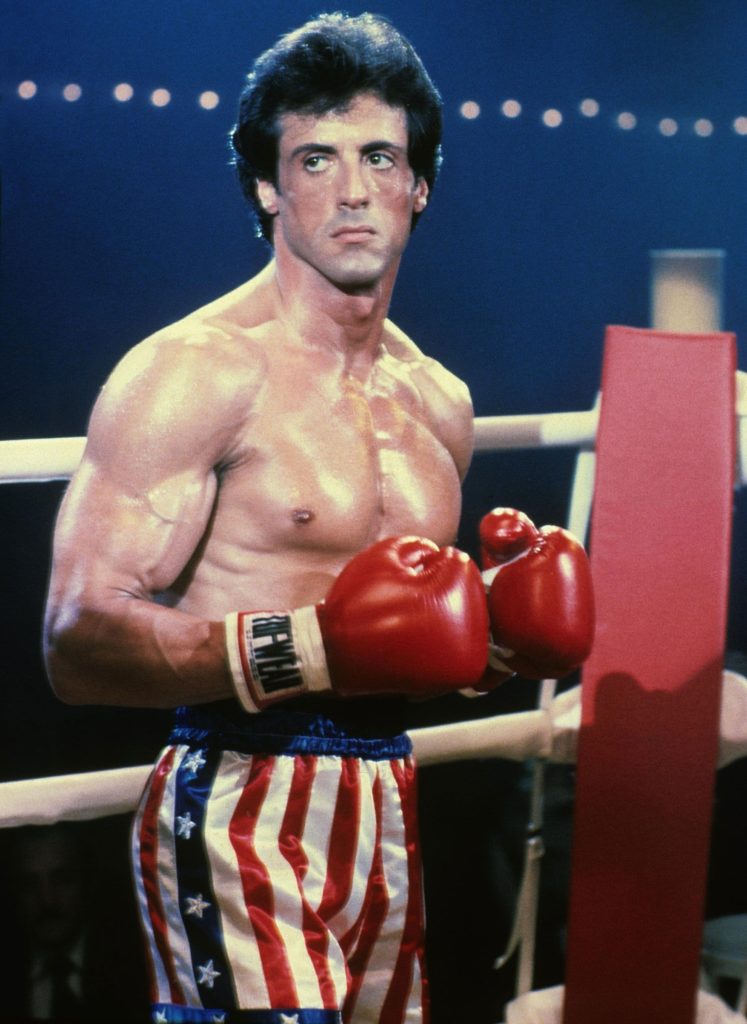 Rocky Balboa is the human-embodiment of resilience, nothing like Osaka or Biles

Together, Osaka and Biles have all the technical ability in the world, but by desperately seeking a ‘safe-space’ to shelter their egos, they’re at risk of forgetting one of the most fundamental parts of becoming (and remaining) a world-class athlete; knowing how to lose.

Look at Emma Raducanu, the unfancied British 18-year-old who took Wimbledon by storm this summer. She rode a tidal-wave of local fanfare to the fourth round before coming unstuck against Ajla Tomljanovic. Emma retired towards the end of the second set citing breathing difficulties, despite being on the verge of elimination anyway. Though after the match she said that she’d been overwhelmed by the occasion, and cracked under the pressure. Fair enough, no one expected her to be anywhere near the fourth round, but what was impressive was the way she freely admitted that the pressure got to her, and promised to work hard so it wouldn’t happen again.

Maturity. Self-awareness. Strength. Osaka and Biles could learn a thing or two.

Raducanu doesn’t have a $60 million contract to fall back on, or any Olympic Gold medals to ogle. She knows that in order to achieve her dreams, she’ll need to be resilient and honest enough to admit when she needs to improve.

The worry now is that Osaka and Biles have opened up a seriously poisonous can of worms. They’re sending the message that it’s OK to quit when things get a little tough, and that when something goes wrong you should wallow in self-pity rather than pick yourself up and push past it.

That doesn’t sound very Rocky Balboa-y does it?

Now Rocky is obviously a fictional character, but he encapsulates the never-say-die spirit most athletes build careers and legacies on. He’s an embodiment of resilience and courage, and the human-manifestation of picking yourself up off the floor and trying again. Why do you think the Rocky theme-song is used in just about every motivational montage that's ever been made? The character is relatable, as is his plight. Because we’ve all been knocked down, and we all want to grasp the chance to get back up and fight.

Right now, Naomi and Simone are the antithesis of Rocky, and both need to have a serious think about the sort of attitudes they want to promote and what kind of role models they want to be.

Do they want to be unwavering, dogged heroines capable of rising to any challenge?

Or simply excuse-riddled, silver-spooned egomaniacs who are one bad day away from another Chad Schofield Moment?