Progress in the Irish language marked with Fáinne Airgid awards

The Students wearing their fáinní

EIGHT students from Greater Manchester, the West Midlands and Weston-Super-Mare have achieved the Fáinne Airgid award.

They may now wear the silver ring as a sign of their ability and willingness to use the Irish language.

Students received their fáinní from Sarah Mangan, Consul General of Ireland for the North of England, at the Friends’ Meeting House in Manchester. 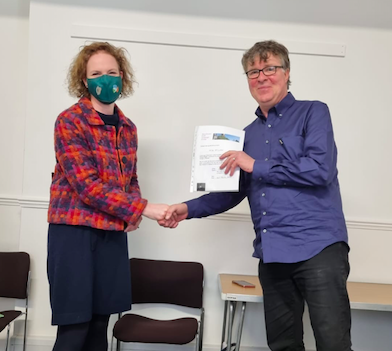 Mike McCusker of Salford receiving his fáinne airgid from Sarah Mangan, Consul General of Ireland for the North of England.

MILG Chair, Pat McGuinness commented: "This group of adult learners have made pleasing progress on their Irish language journey and were delighted to have their awards presented to them by the Consul General.

“This was very fitting given the support received by the Group from the Government of Ireland's Emigrant Support Programme."