Born in the late 1950s, Sandlin grew up in the city during the 1960s and 70s, as the violence of the Troubles drastically escalated.

Sandlin’s family was Protestant, but siblings had married into Catholic families and due to continued threats against them, his family decided to move to Alabama in the United States. 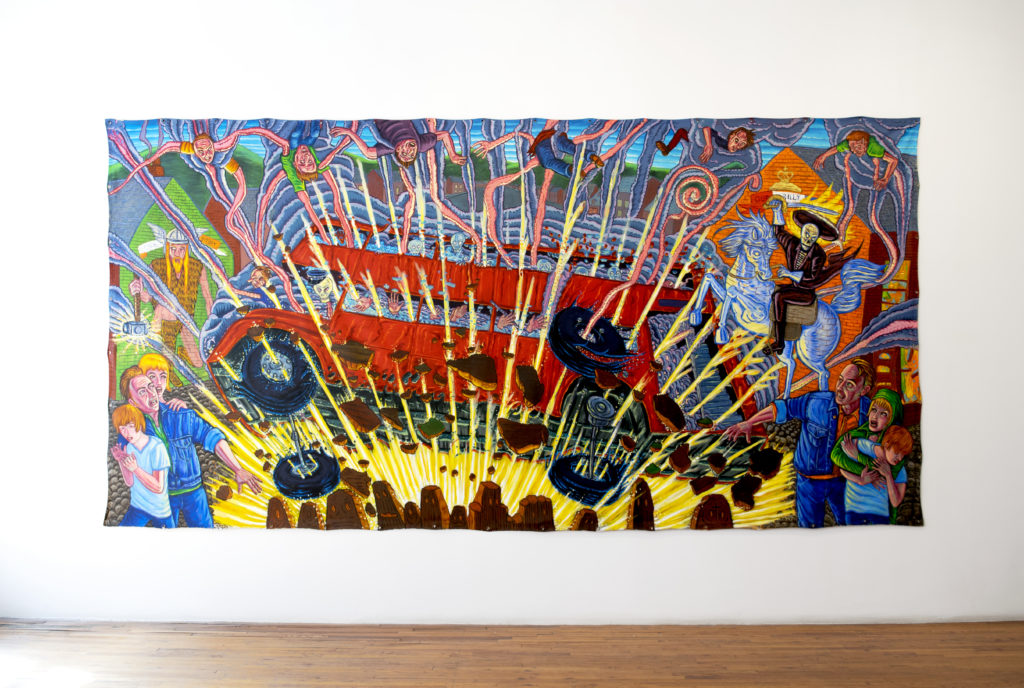 Removed from the civil war in Northern Ireland, Sandlin found himself growing up in rural Alabama, part of a divided America where religious, political, cultural and racial divisions reeked with familiarity.

These burning, dual realities have remained central to the artist’s work, the latest of which is inspired by the Troubles and is now being exhibited at the Owen James Gallery in New York.

“In these, moral judgements are made as politicians and religious leaders alike are cast as snake-oil salesmen,” they add.

“The devil works behind the scenes, revelling in the chaos he creates. All the while sinners and innocents both try to find a way to persevere.”

Through Belfaust, Sandlin sets the stage in war-torn Belfast, where the main protagonists are Bill & Betty - a young couple trying to survive the chaos.

Their lives are put in jeopardy by Carl, Bill’s evil doppleganger, who is really the manifestation of Mephistopheles (an agent of Lucifer in the tale of Faust).

The largest of Sandling’s paintings in this series centres on an exploding red double-decker bus, indicative of the prevalence of car and pipe bombs used to wreak havoc and revenge throughout the Troubles.

This scene presents Bill’s view of the situation, a general, if simplistic, understanding of the death and flames that reach into all corners.

Blocking-in the scene from either side are the famous wall murals of Belfast, one representing the republican nationalists and the other the Ulster loyalists.

Two smaller paintings in the series also reflect this same scene, but from different viewpoints: Betty’s (who is appalled) and Carl’s (who is thrilled).

Sandlin's work is inspired by his childhood in Belfast

“The dense paintings are populated with many of the figures and character types that have become synonymous with the Troubles: hunger-striker Bobby Sands, King Billy (William of Orange) as well as men of the Orange Order, hooded fighters of the IRA and UVF, Thomas Cromwell, the Black & Tans, Boris Johnson and, close by, the Horsemen of the Apocalypse,” the Gallerty explains.

“The Troubles “ended” in the peace treaty of 1998, here in America, our civil war ceased in 1865, and yet, the root causes of both these violent chapters lack sufficient resolution,” they add.

“History is key to the future, and we are perhaps at a turning point again.

Recently, both Brexit and the Trump Administration have tapped into veins of angry nationalism and populism.

“As they grow they threaten to awaken the havoc and violence of the past.

“David Sandlin’s paintings are reflections on history by one who has lived, and suffered, through it, not just studied it.

“They are personal and powerful warnings to us all.”

David Sandlin: Belfaust is open to view at the Owen James Gallery until June 5, 2021.