IT'S almost two weeks since Britain voted to leave the European Union and so far the surge of interest from British citizens seeking Irish passports has overwhelmed the Department of Foreign Affairs, with Minister Charlie Flanagan calling for calm.

Demand was so high in Northern Ireland following the vote for Brexit, that one Post Office in Belfast posted a sign saying they had run out of Irish passport forms.

With that in mind, one entrepreneurial eBay seller from Omagh, Co. Tyrone has posted a tongue in cheek listing selling an Irish passport application form.

Last updated on 2 July, the listing expires in 21 days.

Selling a single passport form for £100, with postage costing £25 the seller advises buyers to “avoid the riots at the Post Office by purchasing online now” with the price “adjusted to reflect current GBP/Euro exchange rate.”

Scroll down to see the ad...

The seller states the form will be “dispatched within 24 hr by courier providing that courier still exists.”

They add that: “If there is a land border erected between North and South of Ireland, you may be forced to scale a fence in order to collect application form.”

In a further update, the seller states that following a number of enquiries about safe delivery, resources are being invested “to enable mass delivery by drone.”

However, if “a dome is placed over parts of Ireland or the UK”, the seller says they will no longer be able to help and “in that case I will see you in one of the camps.”

An additional note says payment will only be accepted in old Irish punts or pasteurised milk.

They conclude that they need 5000 people to build a 200ft wall around their house, unpaid at 80 hours a week, which “is not related to the current political and economic situation and is merely a coincidence.” 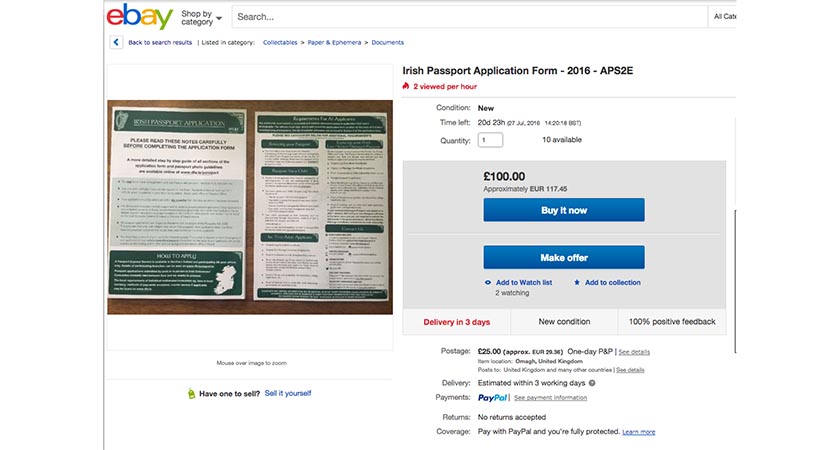