Audience applications for this year's Toy Show are now open-- but why is it still so massively popular with Irish adults?

Okay, well it's not that close-- this year's Late Late Toy Show will air on 29th November, which is still 46 days away (but who's counting?).

So why are we writing about the nation's favourite Christmas show when it's not even halfway through October?

Because applications for 2019 Toy Show tickets are now open, that's why!

The explosively popular show has a 204-person audience capacity, but each year there are over 100,000 applicants.

If you want to try your luck and apply to appear in the audience of this year's show, you can do so here.

Otherwise, join us in an early-onset Christmas buzz as we explore the reasons why a show which is literally just a bunch of kids reviewing toys is regarded as the biggest and best event on Irish television every year-- no matter what age you are.

My Dad is one of the only people in Ireland who has no interest in watching the Toy Show anymore, and when I asked him why he said "It was much funnier watching the [extremely stoic and serious] Gay Byrne trying to talk to children-- I'd say he hated every minute".

And that's fair enough, but for many viewers, watching the current presenter Ryan Tubridy bouncing around the place like a caffeinated antelope, in a myriad of insanely loud Christmas jumpers and seeming to have just as much fun as--if not more than-- the children is definitely a highlight.

Generally speaking, if a group of Irish people are having a conversation and someone mentions the Late Late Toy Show, someone will immediately react with "JOHN JOE!"

The budding horologist appeared on the show in 2009 and truly set the bar for the Toy Show Hall of Fame.

Ten years later and the clip has almost 700,000 views-- we wonder if he followed his dream of studying horology.

Here's proof of the Toy Show's popularity among Irish adults: you can only apply to be in the audience if you're over the age of 18. As in, no kids allowed at the toy show.

The utter injustice of it.

For those unfamiliar with the show, imagine Oprah and her free giveaways-- except that the audience are all dressed as elves, Oprah is dressed as Ryan Tubridy, and instead of a car the audience are gifted with slime guns-- after first being slimed by the presenter and a 10-year-old girl, of course.

This is definitely up there as being one of the best sections of the Toy Show each year.

Kids reviewing toys excitedly talk about how much they love a certain celebrity,and then-- low and behold-- said celebrity appears beside them.

It's gotten to the point where Tubs can't mention a single name without everyone thinking "Oh my God, are they here?!"

Everyone from Robbie Keane to Ed Sheeran to Evelyn Cusack has appeared on the show to surprise their young fans, and generally the kids are left starstuck-- but none more-so than young Toby in the 2003 Toy Show, who looked genuinely petrified to meet Girls Aloud.

A Toy Show drinking game exists and it's pretty popular

Okay, there are a lot of good reasons why the Late Late Toy Show remains popular with Irish people long after they've grown up, but this might be a big reason why it's such a popular annual event for groups of childless adults.

There are several versions of the LLTS Drinking Game, but they all tend to have similar rules and are created in a way guaranteed to have you fluthered by the end of the show.

Take the example below from the aptly-named The Toy Show Drinking Game on Facebook that made the rounds a few years ago... 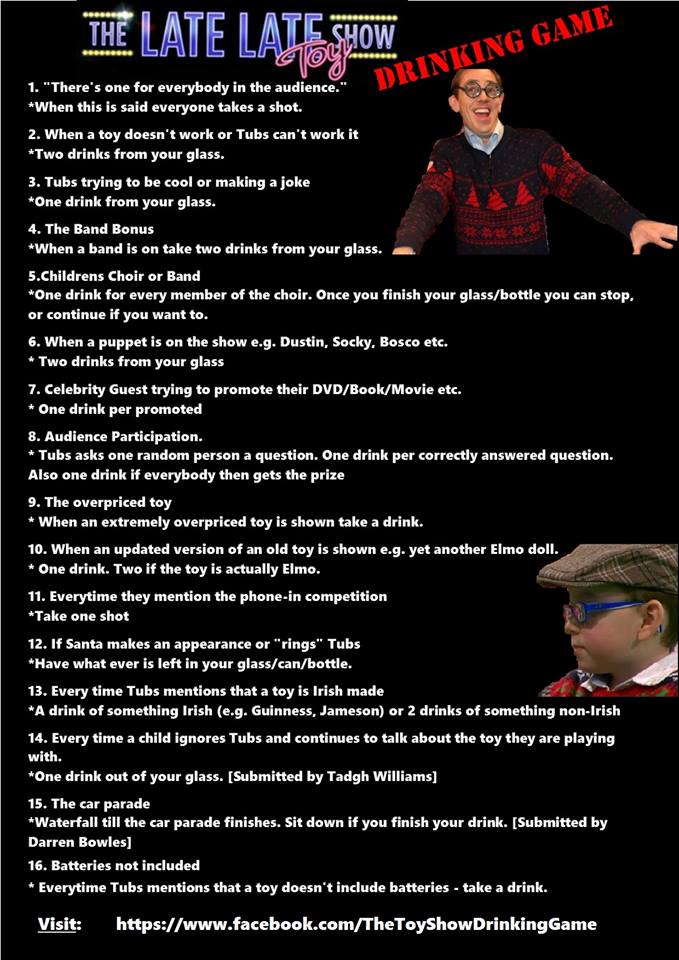