The Top Gun actor was followed down the carpet at The Savoy cinema on Dublin's O'Connell Street by two assistants who wheeled and pointed electrical heaters in his direction.

In town to promote his latest sci-fi flick, which is set 50 years in the future, Cruise arrived nearly 90 minutes ahead of his co-star and former Bond Girl Olga Kurylenko, to meet and greet adoring fans.

One fan, Andrew Hanley from Shankill in Dublin, waited two hours in the cold for a photo with his favourite actor. "I came out here with friends of mine. It's good to see more mainstream American films coming into Ireland, I think it's great," he said. 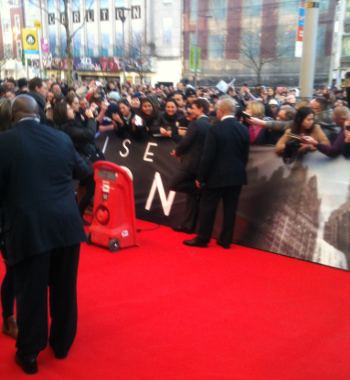 Tom and the heaters pushed down the red carpet with him

The Dublin trip was Cruise's first time back in Ireland since he filmed the 1992 film Far and Away on location there. Speaking to the 500-strong crowd waiting indoors, Cruise joked that he had "Guinness on tap" while filming.

Earlier in the day yesterday, he received a Certificate of Irish Ancestry from An Tanaiste Eamon Gilmore and The Gathering Ireland. The Government-ran organisation traced Cruise's Irish roots to County Roscommon.

View a gallery of images from Tom Cruise's trip here.

Also as part of his Dublin tour, the newly crowned Irish man and Ms Kurylenko visited the Guinness Storehouse, where they pulled their own pints of the black stuff.

"With sci-fi today, when you look back on John Ford, they were making westerns at that time, and westerns for an audience.

"There wasn't really television, there wasn't Internet. So when an audience was going they had this magnificent epic landscape. Like coming to Ireland with The Quiet Man, they were things that people had never seen before on screen, and now today with sci-fi, we get to create a world for this audience," he said.

Irish stars who made the trip out in the cold for the Oblivion premiere included Game of Thrones actor Liam Cunningham, Sharon Corr, and her fellow Voice of Ireland coach Bressie, and author Cecilia Ahern.

Oblivion is released in Britain and Ireland on April 13.