IRISH actor Domhnall Gleeson attended the London premiere of Frank recently. The Irish Post  spoke to him on the red carpet about starring in the Lenny Abrahamson film and what it's like to co-star with Oscar-nominee Michael Fassbender.

What’s it like acting alongside Michael Fassbender whilst he's wearing a head like that, because you can’t see his reaction?

I won’t say it too loudly otherwise he’ll hear, but Michael’s an extraordinary actor, I think we all know that.

He lets you know what you need to know, it all comes through. Anyway he moved, the pitch of his voice, the way he enunciated and just the vibe coming off him let us know what we needed to know, the same as if your talking to myself.

And then when he chose not to talk or not to let you know what he was thinking it was extra interesting. You panic and think what the hell is going on inside the head!

It’s a really good way to work, and it was an amazing performance, one of his best, which I think is saying something.

Does anyone get to keep the giant head?

F******g not me, I asked for it. I think there’s a couple of them. They had a couple of different ones lying around in case they ever got broken.

Would you use the head as a piñata at the end of cast party?

That would be incredibly grim, and you know unless Michael was inside it, it wouldn’t be much fun. Spill his brains out on the pavement would be good. 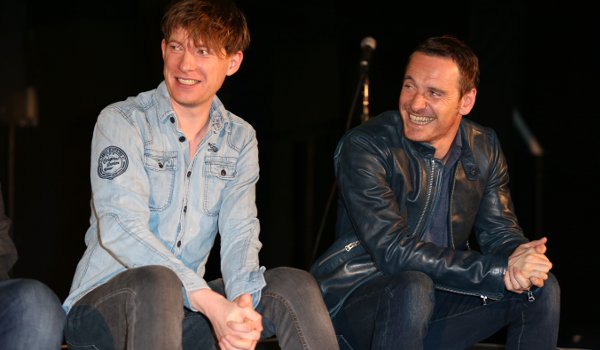 Gleeson and Fassbender co-starred in 'Frank'

How much rehearsal time did you guys have when filming the music scenes in Frank?

It was kind of dribs and drabs for a while before I met up with Francois, Carla and Steve. I had a lot of time just me and Steve who wrote all the music, and did an incredible job. And then Lenny joined and then Michael joined.

We ended up doing a week or two weeks, something like that, but we all knew what we needed to do before that anyway. So there’s a lot of rehearsal by yourself, and then once you get into the room, Steve had to write the songs around us. Once we get into the room the energy was great you know.

Michael would put on the head for rehearsals sometimes and it was like, what a way to go to work in the morning you know, ‘hi I’m going to band practice with Michael!’ It was great.

But, I’m just the keyboardist so that kind of sucks. Who knows the name of the keyboardist? I’m pretty good at the stuff I have to play and pretty crap at everything else!

What sort of music do you listen to?

I’ve been listening to some Irish bands recently like Delorentos and Square Head and bands like that who I really like, and then you know the usual stuff that people listen to.

How did you guys find filming at South by South West?

We didn’t film there. We filmed in Albuquerque, New Mexico, in January pretending to be in Texas in summer, which is a very different experience. It was fun, Albuquerque was a mad place, we had a lot of fun.

That’s where we started our journey together, we kind of shot the end of the film first. It was a great place and it was a nice way to start off, we were all away together in our little enclave.

Calvary, Frank and now Brooklyn are largely filmed in Ireland. What is it that draws you to filming in Ireland?

There’s nothing that draws me to filming in Ireland at all, apart from the fact that they were really good stories with really good people attached that I was desperate to work with.

The fact that they’re [films] Irish is coincidental. 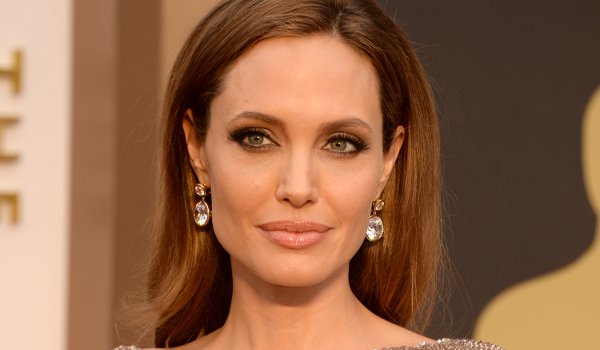 Do you have any future plans to star alongside your father Brendan again?

Yeah, absolutely all the time. We’ll figure it out. My brother Brian is a tremendous actor also, so we’re working on it, we’ll see what we can come up with.

Is there anything in the pipeline?

Maybe, but I’ve got to keep my mouth shut for the moment, maybe some time next year we might get working on something that’d be fun.

What was it like to work with Angelina Jolie in her directorial role for your upcoming film Unbroken?

I think that she is a wonderful director, a wonderful human being, I was very lucky to spend time with her and I think she’s done a great job.

I don’t think it would be a surprise to people that she’s done a great job because she’s so dedicated and so talented.

And the fact that she’s well known for acting has nothing to do with it, she’s just incredible at directing in her own right.

I mean, we’re not best friends, I don’t spend the weekend at her house, I keep asking but she just never returns my calls!

But, no she was everything that I needed a director to be, she was caring, loving, talented, dedicated and I had great insight into what was required and she gave us everything we needed.

My experience with her as a human and as a director was as good as it could ever have been and I’m glad to know her even a little bit.