Sitting uncomfortably in a South London theatre (where she is rehearsing for East is East) McLynn explains that she has had a bit of an “unusual accident” this morning. She spilled hot miso soup on over a rather delicate area. “I want to”, she says trying to cross her legs, “but I cant”.

2. She’s spending the next 15 weeks on the road

The East is East tour takes her around the country until September 19 and McLynn’s never been on tour for that long before. “The kind of exciting thing is we are going to loads of places I’ve never been to like Nottingham and York.” Her mum will be coming from the west of Ireland to see her while she’s on tour and they plan to visit Torquay (“The English Riviera”). 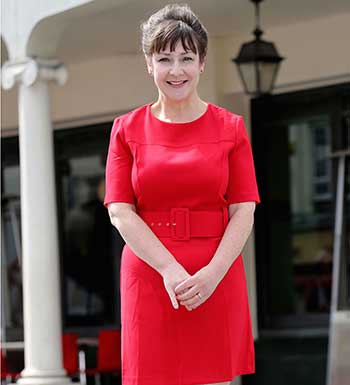 3. She’s not a big fan of Christmas

“I don’t much like Christmas,” says McLynn who spent last Christmas working non-stop on The Knight of the Burning Pestle at The Globe. “I was kind of glad to be working over Christmas but then it was all double shows and I decided it was too much work”, she says. She did however enjoy doing a show in candlelight as it was “very kind light to the older lady”.

4. She’s gets home to Dublin whenever she can

“A load of the work I do would be here, but when I have any length of downtime at all I go back to Dublin because I have a nice house there and two pussycats and a lovely husband — he’s more mobile obviously than the cats though.”

5. Her husband appreciates a good laugh

McLynn is married to Richard Cook, the man who set up the famous Cat Laughs Comedy festival in Kilkenny. The festival has been running for two decades and attracts some of the biggest Irish and international names in comedy, playing to sold out crowds every year.

6. Eastenders was her favourite soap, even before she was in it

McLynn made her mark on Albert Square when she took on her recurring guest role as Yvonne Cotton, Charlie Cotton’s mum. Yvonne made her first appearance in Walford in May last year. Being in the show hasn’t put her off watching her favourite soap either. “I didn’t want get out of the habit of watching just because I was in it.” 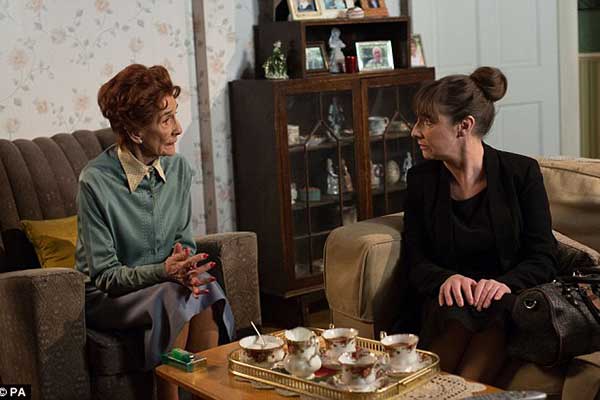 Pauline McLynn has a recurring role as Yvonne Cotton in Eastenders

8. She knows London like the back of her hand

London is pretty much all McLynn knows. She’s been in Britain “on and off” for the best part of 20 years and used to have a flat on Berwick Street in Soho.

“I wouldn’t have know it was 20 years only that I read it in the papers”, she says speaking about the ground-breaking Irish comedy which made her character Mrs Doyle a comedy icon and household name. This year is the 20th since the show first aired and McLynn says she “[doesn’t] know where those 20 years went. I have kind of a bendy concept of time anyway; I just can’t fathom it. They flew by.” 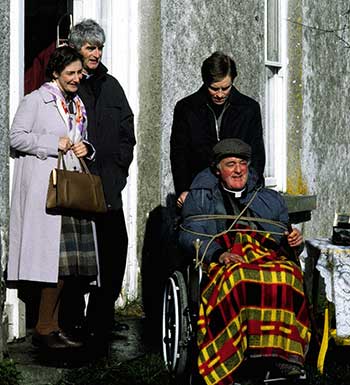 She still gets predominately recognised as Mrs Doyle but increasingly people on the street are spotting her because of her role in EastEnders. Case in point, she was getting off a bus recently when an old woman fixed her with a look and said, “I don’t like what you did to Dot”.

“I was whinging about something to my sister in law the other day and she said ‘I think you might be a bit of a perfectionist’”. So is she? “You do get self-critical but the day you are not, the day you are well pleased with yourself is that day you’ve lost your edge. Ask any actor, you watch something for the first time and you are only watching yourself.”

12. She can add playwright to her CV now

Last year McLynn was commissioned to write a play for The National Theatre, which she got “great mileage” out of. “I was going round and saying to people I’ve never acted at the National but I’ve got a play on there first — who would have thought?” They play was commissioned as part of a series called Connections. “They get you to write a story for young people. My play was called Angels and it was set in a graveyard.” The play’s action centred on a community group doing a clean-up project and featured three talking statues.

13. She’s appealing to a younger generation

Ever seen the cartoon Bing on CBeebies? Well if you are familiar with Bing the bunny, Flop (his friend the knitted stuffed toy) and all their cohorts, you might recognise the voice of the ice cream lady. It’s none other than Pauline McLynn.

14. She got her first big break on Scrap Saturday

McLynn did all the female voices on Scrap Saturday, the satirical radio sketch show created by Dermot Morgan which aired in Ireland in the late ’80s and early ’90s. The show was hugely popular, so much so McLynn says Irish diplomats overseas would have a recording of the show sent to them weekly so “they’d know what was going on in the country”. The weird thing, she says, is that many of the politicians they were lampooning back then are still around today and “still in trouble”.

15. She almost had a run-in with former president of Ireland Mary Robinson

On Scrap Saturday, McLynn did a brilliant impression of Mary Robinson (although they briefly considered if it would have been funnier voiced by Dermot Morgan). “I had no idea of protocol”, she says, telling the story of meeting newly-appointed President Robinson the first time. McLynn walked straight up to her and said “I’m Pauline McLynn and I do you on Scrap Saturday”. Robison was well aware but said her children did a slightly better impression of her to which McLynn replied “Yeah, but I have seven years to get it right.”

16. Theatre is where it all began

McLynn started in theatre with the Players society at Trinity College Dublin, mainly doing “admin and stage management”. “I was a bit bossy!” she says laughing. In her third and fourth year she caught the acting bug fully and never looked back. By the time McLynn finished college Ireland was deep in recession and there was little employment out there for graduates. “I said ‘Lookit, I’ll give the acting a try’ and no one batted an eyelid, it wasn’t like I was turning my back on a steady job in the bank”. A few of her friends set up the lauded theatre group Rough Magic, which is still going strong today. McLynn is listed as a patron, “not that they need my advice”, she jokes, “and what would I say anyway? ‘Keep up the good work?’”

According to McLynn she’s always been cast as the “older lady”. “I was never burdened with good looks. I was always ageing up to play old dears and they are great fun, but I was always the old hag!” Now in her early 50s it’s the opposite, she says proudly reading the age of her character in East is East “Ella Khan, aged 46”.

McLynn says her iconic character Mrs Doyle was spared the ultimate humiliation because of the weather. “The make-up artist made a little mole, a wart if you will, for Mrs Doyle’s face. Then she tried to stick a bristle from an actual sweeping brush in it, but it wouldn’t stick, the weather was too cold at the time so we left it off.”

19. She definitely has another book in her

“I love the dark side”, McLynn confesses and says her next book will be full of “awful bad murders”, “skulduggery” and she’s thinking about setting it near a bog. 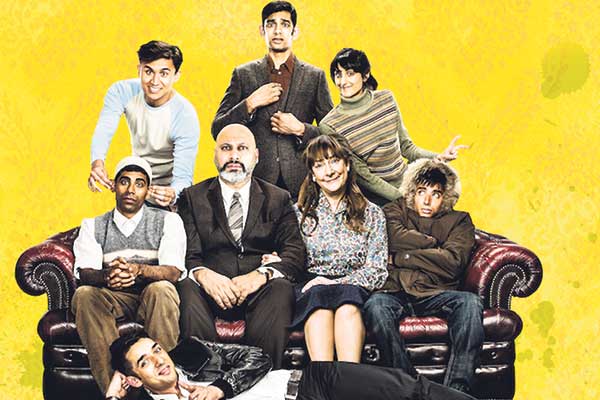 The cast of East is East, on tour until September

Her latest role is in new stage version of East is East, Ayub Khan Din’s (whose mother has Irish heritage) semi-autobiographical account of British Asian life in the 1970s. Made into a successful film in 1999, it deals with the clash of cultures between a multi-cultural family growing up in Salford. “It’s the story of a family,” she says, “you catch them at a crisis point and they all behave terribly.” McLynn says she didn’t want to watch the film again before taking on the part of Manchester mum Ella Khan.

East is East is on tour until September 19, 2015, with dates in Woking, Bromley, Torquay, Stoke, Nottingham, York, Glasgow, Bradford, Sheffield and Bath. For details see www.trafalgartransformed.com

WATCH: Incredible moment huge bird of prey 'plucks shark from ocean' and carries it over beach-goers