WHILE previously visiting Dublin I was fortunate to see one of the most celebrated bands in Irish traditional music.

Frankie Gavin and De Dannan drew a capacity crowd to the splendour of St Patrick’s Cathedral in the centre of Dublin.

The second set of tunes, including reels and jigs, harked back to the glory days of the Flanagan Brothers of the 1920s and ‘30s in New York.

The songs that followed by vocalist Michelle Lally were truly wonderful, delivered with her unmistakably powerful and majestic voice.

After a bracing set of reels that paid homage to my own county men, the legendary Sligo fiddle players Paddy Killoran and Michael Coleman, both of whom made influential recordings in America back at the beginning of the last century, De Dannan then did a rip-roaring version of one of Handel’s masterpieces, The Arrival of the Queen of Sheba. 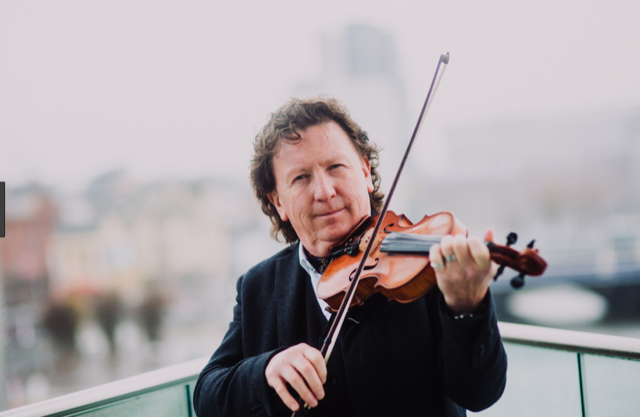 The following morning, in the luxury of one of the most famous hotels in Dublin, owned by none other than Bono of U2, I met the affable Frankie Gavin where we talked over the previous night’s performance and the story of De Dannan…

Frankie, what have you got in common with Bono and U2?

I have little or nothing, to be honest with you.

I like rock’n’roll, but I’ve been lucky enough to have played with the best rock’n’roll band in the world The Rolling Stones.

You were born in county Galway and I believe you come from a great traditional music family?

I was born and reared in Corrandulla in Galway.

I got a tin whistle for my fourth birthday, and that’s where it all started.

Music is in my blood as there was a huge volume of music on both sides of the family.

All my siblings played fiddles and concertinos, and I was able to pick an instrument up and play by ear.

By the time I was ten, I could master the fiddle, the flute and other traditional instruments as well.

I did receive some formal training in music, but my ability on the fiddle is mainly self-taught.

When I was 17, I obtained first place in Ireland in both fiddle and flute competitions. I’m the youngest of a family of four, and everybody in the house played.

I was strongly influenced by the ‘78 recordings of Michael Coleman and James Morrison from your county, Sligo.

Can I take you back to 1961, and the visit of President JF Kennedy to Galway?

I was fortunate enough to play for President Kennedy when I was six years of age, on his visit to Galway.

I have since played for some other presidents: George Bush, Bill Clinton and Barrack Obama. The first time I got an invitation from the White house to play for George Bush, I didn’t quite believe it and thought it was a prank. He was having a big dinner party for all his Irish-American friends; it was an amazing occasion. Bush was a very funny man.

Can you remember when De Dannan first took to the stage?

It was around 1974, when I launched the band. I was only about fifteen at the time and still at secondary school. We started sessions in Hughes’ pub in Spiddal; myself, Charlie Piggott, Alec Finn and Johnny McDonagh. We seemed to gel straight away. We then got a gig in a folk club in Dublin and it took off from there.

What prompted you to get Dolores Keane to join the band?

Some of the lads were saying it would be nice to have a singer with us. Dolores Keane was a near neighbour and a close friend. In fact my father dated Dolores’s mother one time going way back.  When Dolores joined us, she was an instant hit and we recorded a song, The Ramblin Irishman, which put us on the map, I suppose.  Then Dolores got married and headed off to work in London. She did however return to do some albums with De Dannan in later years.

Mary Black followed Dolores and we had a huge hit with A Song for Ireland.

Mary left after a couple of years to pursue a solo career in more contemporary music.

I then discovered Maura O’Connell singing in a hotel in Sixmilebridge in Co. Clare. She was simply amazing.

You have performed with some of the greatest bands, including The Rolling Stones, how was that?

It was absolutely brilliant to be with the Stones but terrifying playing with them for the first time in the Oakland Arena just outside San Francisco in front of 80,000 people.

I remember Keith Richards saying that my instrument would be known as a violin in the north and a fiddle in the south of England.

Where did the name De Dannan originate from?

The band was named after an Irish legendry tribe, Tuatha De Dannan and it has stuck ever since. Of course being an unusual name people remember it.

The line-up of the band has obviously changed over the years – are you the only original member left?

I would say the present De Dannan is the finest version of the band. You have now seen us and heard us, what do you think?

Catch Frankie Gavin at The Chapel, Salisbury, on Friday, March 4. Doors 7.30pm, music at 8pm Tickets are available here. A donation of £2.50 from each ticket will be going to Salisbury Hospice.