The first episode air tonight on BBC Two at 10pm.

Scroll down to watch a preview clip.

We caught up with the former University College Dublin student, forthcoming TV show director and favourite son of Boyle, Co Roscommon to find out what he thought of the upcoming series and the character he plays.

Chris thanks for talking to us. Can you tell us what Family Tree  is about?

Family Tree is a comedy about a guy who has been left somewhat bereft after losing both his job and his partner. Out of the blue he discovers he has been left a box of magic goodies by a dead relative that he can’t remember ever meeting but it does pique his interest and he goes looking into his past roots.

He already has quite a muddled past with an Irish mum and an English dad who split when he was young so he ended up living in Ireland with his mother while his sister Bea grew up in England with their father. So he doesn’t really know who he is.

In search of his own identity, he begins looking into his family tree.

What can you tell us about your character Tom Chadwick?

He is handsome, a strong great-looking guy and fit! He is utterly clueless, fairly sensitive, confused and not at all an extrovert but he should be fun to be around. 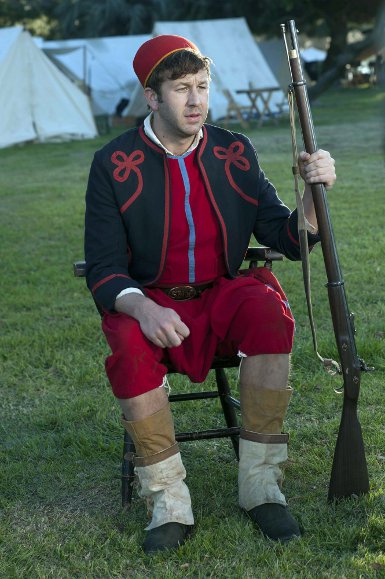 O'Dowd in episode 6 of Family Tree

Where is Tom in his life when we meet him in the story?

He’s just lost his job and been made redundant; he worked at the Central London Accident Investigation Management whose job it is to decide whose fault it is when somebody crashes their car.

He works with models almost like one of those kid’s maps with schools on it and things. The company realise that computers can do it but he doesn’t know how to use computers so the company goes downhill and he gets made redundant.

He has a bit of a redundancy package that will last him maybe a year but alongside being made redundant we find out that his girlfriend leaves him.

So he’s chirpy! He is having a tricky time and therefore embraces the opportunity to find out stuff and is very excited to throw himself into something new – more so than he would have been previously. It is a distraction from the mundane and of crying alone in the bath.

We are both very different people and we have our hang-ups. Bea’s manifests itself in the shape of a puppet called Monk. We are both equally confused by our up-bringing.

Their parents got divorced when Tom and Bea were around nine or ten and the English father and Irish mother took a kid each and I feel sure they flipped a coin to see who took which child.

Tom and Bea have a fairly good relationship and she’s much less interested in the whole family tree thing.

Tom has a best friend, Pete. What is it about Pete that has kept these two friends over the years?

Pete is just so excitable. Even though they have grown apart over the last few years, Tom loves Pete’s enthusiasm.

It’s a very rare occurrence that Tom will be the most intelligent person in the room but with Pete that’s always the case, so that’s rewarding for me emotionally. Tom Bennett who plays Pete is really funny and his character is great - he is a nut job.

What was it about this project that attracted you?

I’d like to say I’m a big fan of Christopher Guest but truthfully I haven’t seen any of his stuff yet, I just keep hearing that people really like it!

I was probably one of those students that had This Is Spinal Tap on in the background, so I could probably quote all of it. Chris is simply a genius. I love a bit of improvisation and because this is an improvisation piece I thought it would be a challenge.

One of the big draws of his project was that I hate learning lines - it’s so boring and it felt like this would be different – there isn’t anything else like it on TV at the moment so I was interested in it because of that.

Does Chris Guest’s style of improvisation mean you tend to do exactly what he says?

Aside from the fact that I respect him so much he says so little that it must be important if he does say something. He does let you go free quite a lot of the time and try various bits and pieces out but in the end I do as I am told.

Despite being based around improvisation, the process is not a loose, carefree system at all. It is quite specific and structured, particularly where there is a lot of exposition and filming of story outlines that we needed to accomplish.

The challenge was to do all of that whilst still trying to make it funny. So the process needed to be quite structured and that is what will keep people interested, as the story is strong.

How important is it to have clear guidelines to build your character around?

A lot of the back-story was set out before we began filming by Chris and Jim (Piddock). As actors we then come in and make it our own, add bits of story and detail but in terms of the character that was almost like reading a script where it’s all set out.

Chris gave me four pages of Tom’s history to work from and the same for the family, which was really important to this piece. I feel that Tom is the ‘eyes’ of the audience rather than the guy who is cracking all the jokes.

As somebody who moves around a lot from country to country I recognise the identity confusion that can arise in a person so that’s an interesting angle to him. 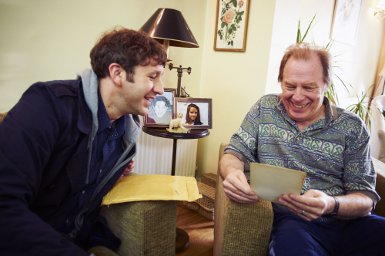 Have you ever looked into your genealogy?

A little bit, especially as my parents get older and before they die I want to know more. I found out that my great grandfather was a bigamist and a travelling salesman.

We found out after his death, I never met him, it was before my time but he had a second family in Birmingham and O’Dowd is quite an uncommon name.

This is pure conjecture but one strand of O’Dowds that came from Birmingham also spawned George O’Dowd who people probably know better as Boy George. So we could be cousins.

What are the challenges of making comedy funny?

There is a constant battle between keeping people engaged and keeping people laughing that is tricky. I think and hope it will be interesting and enjoyable to watch. In a way it is like throwing a can of paint at the wall and seeing what sticks but hopefully the paint will be funny.

What does Mr Pfister played by Jim Piddock represent in Tom’s life?

I think even though he is an odd character there is a sense that Mr Pfister is more of a rock to Tom than his own dad. He lives downstairs and runs an antique / junk shop and is very open to suggestion.

We share a lot of interest in history and cakes – that’s actually it, they are the two interests they share but they make a lot out of it.

He has that close-knit proper family like an old school Irish family but he is in fact South African. They are a much tighter unit than Tom’s family is and that is what Tom is searching for.

The search for Tom’s family takes him to the US. What can you tell us about this strand of the family?

I find out I have a great grandfather who was born in the US but who then came to England to have the rest of the family. However, before he left America, he spawned the Yankee side of the family and Tom goes over to meet them.

The American Chadwicks are played by Chris Guest’s great crew of actors and Chris himself has a few parts.

Family Tree will premiere tonight on BBC Two at 10pm.

Watch a preview of tonight's episode below