PORTRAITS of Oscar Wilde and his lover Lord Alfred Douglas, also known as Bosie, have gone on display in London to mark the anniversary of homosexuality being decriminalised.

The portraits in oil, based on nineteenth-century photographs were painted last year by contemporary artist Marlene Dumas.

The portraits have now been loaned by the artist to the National Portrait Gallery’s Victorian galleries to coincide with the 50th anniversary of the partial decriminalisation of male homosexuality in England and Wales.

While the Gallery holds several original photographs of both sitters, it does not own an oil painting of Oscar Wilde, who died in 1900.

Displayed adjacent to the grand enfilade setting of the Gallery’s ‘Statesmen’s Gallery,’ the two large portraits are exhibited for the first time since originally being shown as part of Inside: Artists and Writers in Reading Prison, an installation developed in 2016 that responded to Wilde’s incarceration there between 1895 and 1897.

Oscar Wilde’s final works, De Profundis (1897, published 1905) and The Ballad of Reading Gaol (1898) emerged from the profoundly affecting experience of his imprisonment which followed his criminal conviction for his relationship with Bosie, at a time when male homosexuality was illegal.

Artist Marlene Dumas said: "I have been a fan of Oscar Wilde ever since I can remember.

"As a writer of great wit, his combination of intelligence and humour is unique.

"He was imprisoned at Reading for two years for loving the beautiful, untrustworthy 'golden boy' Bosie.

"I have painted Wilde before the entry into the prison that destroyed his life and tried to show him less as a proud author and more as a vulnerable man in relation to the young lover who led him to his tragic end," the South African-born artist added. 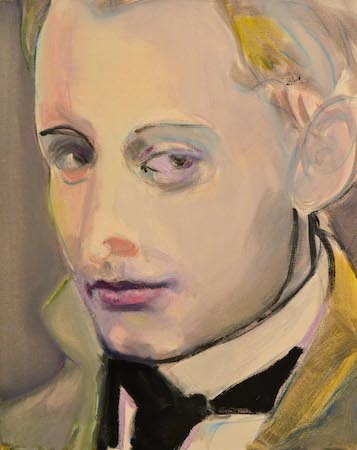 Rosie Broadley, Curator of Marlene Dumas: Oscar Wilde and Bosie, added: ‘These portraits are resonant of the conflict that existed between public and private identities in the Victorian era.

Irish-born Oscar Wilde was one of the most significant writers, dramatists and poets of the late nineteenth-century remembered for his witty epigrams, his novel The Picture of Dorian Gray, his poems, essays and short stories, and his plays including The Importance of Being Earnest and Lady Windermere’s Fan.

Marlene Dumas: Oscar Wilde and Bosie forms part of a year-long programme of special displays and events, entitled ‘I am me,’ at the National Portrait Gallery exploring sexuality, gender, art and identity.

There is also Speak its Name! (until August 6) a display of photographic portraits to marking the 50th anniversary of the partial decriminalisation of male homosexuality in England and Wales in 1967.

Their portraits are accompanied by quotations from the sitters who share their experiences of coming out.

These range from coming out to friends and family, to wanting to be honest to their fans and the media.