GLOBAL superstar Niall Horan is among a bustling line up of Irish celebrities who are taking part in a unique fundraising event supporting the London Irish Centre (LIC) this month.

The Mullingar musician joins the likes of Laura Whitmore, Imelda May and Maverick for the London Irish Charity Night In – a one-off show which takes place on Thursday, June 11 and kicks off at 8pm.

LIC patron Dermot O’Leary will also be taking part, along with comedian Dara O’Briain, presenter Angela Scanlon, actors Robert Sheehan and Siobhan McSweeney and artists Lisa Hannigan, Loah and Mundy among many others.

“I am very proud to be patron of The London Irish Centre - the LIC does amazing work across London, and right now, they need our support,” O’Leary said.

“As it’s not possible to run our usual fundraising events, I’m thrilled that our friends and supporters are joining us for a little online fundraising adventure,” he added. 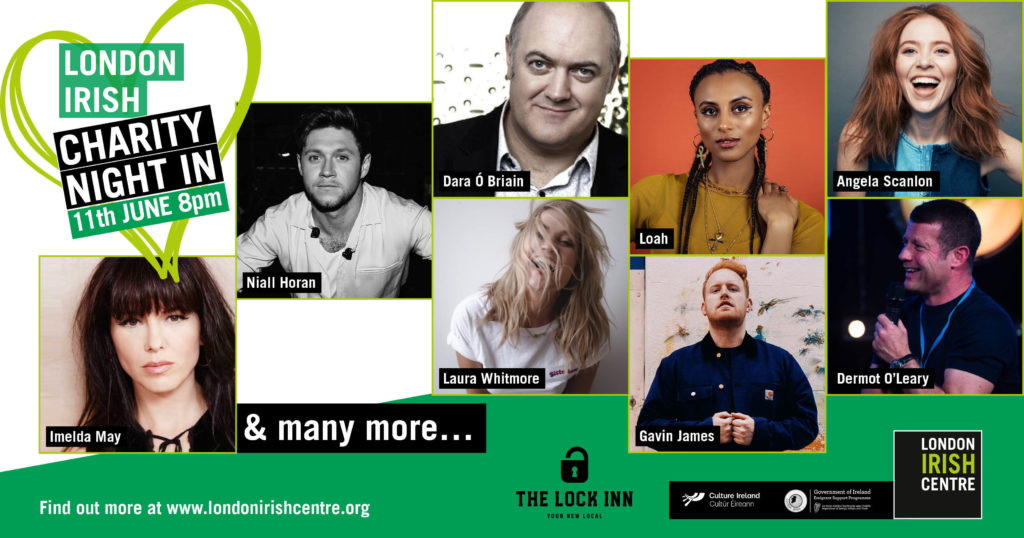 The event – which will be streamed live on LIC’s Facebook and YouTube pages – is described as “a fun night of music, interviews and conversation with Irish celebrities from across the UK and Ireland”.

But it is designed to raise much-needed funds for the centre, which has worked tirelessly to support its most vulnerable members and those in its local community throughout the pandemic but has suffered significant financial losses due to the cancellation of its planned fundraising events.

They have set a £100,000 fundraising target for their Charity Night In, which will “include a charity auction with the opportunity to win great prizes from Ed Sheeran and others, all for a good cause”, they explain.

LIC CEO Ellen Ryan said: “I am so proud of the way we have all pulled together as a community through this crisis.

“Staff, volunteers and our friends have worked hand in hand to ensure that we deliver the services and cultural output needed to enable the community to feel a sense of hope and resilience for the future,” she explained.

“We have also received crucial support from the Irish Government and Irish Embassy, London, and our partners at Camden Council,” she added.

“This very special event is your opportunity to join us and support our essential work to enable us to continue our recovery into the future."

The LIC has been providing community services and Irish culture in London since 1954.

While the Covid-19 crisis had a huge effect on its capacity to provide those services, it hasn’t stopped them ensuring their most vulnerable members are supported.

Despite the Centre closing its doors on Wednesday, March 18, it responded to the pandemic by reshaping its services.

To date it has increased its web and telephone support to deliver over 1,100 advice sessions and 1,000 health check-in calls, trained up over 30 telephone befrienders, engaged over 200 volunteers, and provided over 2,000 hot meals and food parcels to the community.

It also became the first Centre shielding the vulnerable in Camden.

And they have recently announced the SOLAS Season - a curated series of online culture and community to keep the Irish community across Britain connected and inspired during challenging times.

Now they are gearing up for a fundraising night like no other, and you are all invited - you can watch the event live on Facebook or on YouTube.

THE LONDON IRISH CHARITY NIGHT IN LINE UP (SO FAR...)

For further information about the London Irish Centre and how you can support its work click here.