TRANSLATIONS by Brian Friel, directed by the maestro Ian Rickson, returns for a second time to the National Theatre after a five-star, sold out run last year.

Friel’s masterpiece exists in a world that is both past and present for an Irish audience.

Set in a hedge school in the fictional town of Baile Beag, in County Donegal in 1833, there is a lot that is at once familiar. 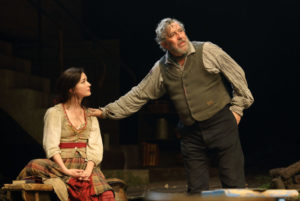 The whole play is centred around language.

When the Irish-speaking community of Baile Beag is rudely interrupted by the arrival of British soldiers, confusion ensues.

The soldiers are making a map of Ireland in an attempt to reshape the country, not simply by changing names, but resulting in the erosion of a culture and linguistic tradition.

The new translations given by the soldiers are meaningless.

With the exception of Hugh, the master of the hedge school played by Ciarán Hinds, the characters are not yet sure of the weight of what is happening.

The romantic British soldier Yolland, who has fallen in love with Ireland, the Irish language and local girl Maire, is wary of his part in what he sees as “an eviction of sorts”.

It is a play that makes you want to speak Irish, or makes you wish you could.

In a powerful moment from the director Ian Rixon, Yolland requests that Owen repeats the Irish place names as they are, in his own language. 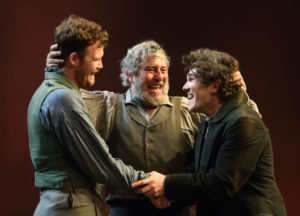 Owen kneels by the table, the logbook in front of him becomes a bible of sorts, and he reels off an incantation of Gaelic place names, in the strong, regal, guttural native tongue.

From the vantage point of the audience, the whole play is spoken in English, but the confusion between the locals and the soldiers - with stunted translations by Owen, acting as an interpreter for the soldiers - makes the language barrier hilariously apparent.

Yet in the beautiful love scene between Maire and Yolland, Friel presents to us another idea, that not everything requires translation.

Many things not spoken are still understood.

It is funny, it is lovable, it is heart-breaking.

It is an important, intimate and beautifully written piece of Irish theatre.

Translations is playing at the National Theatre’s Olivier stage, London until December 18. For tickets click here.