The Siege of Jadotville: Seven things you need to know about Netflix’s new Irish war film based on mind-blowing true events

THE FIRST trailer for Netflix’s upcoming war film The Siege of Jadotville has been released and fans of Irish history are in for a treat.

The trailer offers a first look at Jamie Dornan as Commandant Pat Quinlan, an Irish soldier who led his company of Irish UN troops against rampaging mercenaries during the Congo Crisis in 1961.

Here are seven things you should know about The Siege of Jadotville.

1. The real siege was an incredible display of Irish resourcefulness

The film follows the events of a 1961 siege in which some 158 inexperienced, badly-equipped and outnumbered Irish soldiers kept a vast force of Katangese mercenaries at bay.

As thousands of armed adversaries fired their way towards the Irish compound, one besieged Irishman radioed his superiors with a typically Irish light-heartedness: "We will hold out until our last bullet is spent. Could do with some whiskey".

The outnumbered Irishmen were forced to surrender after six days of holding their own, but not before inflicting hundreds of casualties on the enemy. They were held as prisoners of war for a month before their release — and remarkably enough not one Irishman lost his life.

2. You haven’t heard of Jadotville for a reason

The events of the siege are criminally under-known in Ireland, and indeed in Britain, as the Irish soldiers involved were ordered to hush up about their experience in Jadotville.

The veterans of Jadotville eventually became dissatisfied with the Defence Forces’ refusal to acknowledge the battle, and particularly the lack of recognition for Commandant Pat Quinlan’s outstanding achievement in saving the lives of every one of his men.

In 2004 a Defence Forces inquiry cleared Quinlan and his men of any wrong-doing and praised their courage against the odds. A commemorative plaque honouring A Company was eventually erected in an Athlone barracks in 2005.

3. The film premiered at Galway Film Fleadh in July and received a standing ovation

The world premiere screening of The Siege of Jadotville was held at Ireland’s film festival, the Galway Film Fleadh, on July 9.

The film was well-received by those in attendance and was even given a spontaneous standing ovation by its audience.

An announcement was made at the end of the screening that Minister of State at the Department of Defence, Paul Kehoe, had created the award of Presidential Unit Citation in honour of the men who fought at Jadotville. 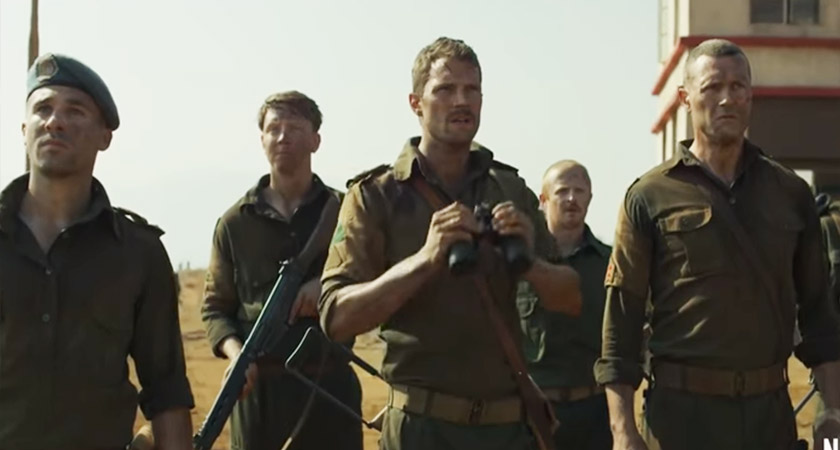 Armed and Irish, a scene from the movie (Picture: YouTube)

Jamie Dornan plays Commandant Pat Quinlan in the film, the beleaguered commander who somehow kept every one of his men alive.

“It’s not Christian Grey in uniform,” joked the 34-year old Northern Irishman in an interview last year with MailOnline, no doubt hoping to put his experience with the universally-panned Fifty Shades of Grey movie to one side.

The real life Pat Quinlan died in 1997 without recognition for his duties, but has since been honoured as an Irish hero.

5. It’s sure to be yet another brilliant Netflix exclusive

The Siege of Jadotville is set to join an impressive list of exclusive Netflix releases, which already includes hit TV shows and movies such as House of Cards, Making a Murderer and Beasts of No Nation.

Netflix will be hoping to build on the aforementioned successes which have propelled the entertainment company into standing with the giants of filmmaking distribution.

If The Siege of Jadotville is half as good as the almost universally well-received Beasts of No Nation, then Irish movie fans are in for a treat.

6. The cast comprises of a host of Irish and British talent

Well-known and highly-rated London actor Mark Strong is rumoured to be playing the legendary Irish politician, writer, historian and academic Conor Cruise O’Brien, who was a diplomat in the Congo at the time.

Other Irish actors in the film include Ronan Raftery, Sam Keeley and Michael McElhatton of Game of Thrones.

7. You’ll only have to wait a month to get to see it

The film launches globally on Netflix on October 7 — meaning fans will only have to wait a few weeks to see Dornan and co in action.

Directed by Richie Smyth from a screenplay written by Kevin Brodbin, The Siege of Jadotville was filmed in South Africa last year.