'Taking on Once The Musical was potentially disastrous' - Enda Walsh interview

EARLY Tuesday morning and acclaimed Irish playwright Enda Walsh is being distracted by his dogs.

“I’m just driving around here with them,” he shouts down the speakerphone, the sound of a whining dog in the background.

“It’ll be grand though. Let’s talk. Jesus Christ, it’s cold isn’t in? Are you keeping warm? It’s brutal isn’t it?”

Mind racing, hard at it and full of energy, Walsh rarely lacks enthusiasm over the course of our 20 minute conversation.

Considered in his thought, the Dubliner is a warm and straight-shooting interviewee. And he’s all go.

This is evident, of course, in his prolific output. Since relocating to London via Cork in 2006, the 45-year-old has written 10 theatrical plays, four screenplays and two radio plays.

When we speak he’s just about to hand in his latest work, an Irish-set play entitled Ballyturk. “I’m handing it in tomorrow,” he says with an enthusiastic chuckle. “I’m just going home now to read it and see if it makes any sense.”

It’s his latest stage work, however, the much-acclaimed musical adaptation of the 2006 hit movie Once, that we’re gathered in conversation.

Once: The Musical has inherited the same incredible success of its screen counterpart.

Where John Carney’s “little movie” went from a budget of €130,000 to Oscar-winning glory and a worldwide box-office haul of €21m, Once: The Musical has similarly grown from initial development in a cabaret bar in Boston to the Broadway stage where it has, to date, taken more than $53million and swept the board at the prestigious Tony Awards, taking home eight trophies including Best Musical.

More of the same is expected next Tuesday when the musical officially opens on London’s West End following three weeks of previews.

Its success is all the more surprising given that Walsh, known for dark and complex work, believed that taking filmmaker John Carney’s delicate love story from screen to stage to be a “potentially disastrous project”.

“I was a little bit embarrassed when they initially asked me to do it”, he says matter of fact. “I mean, I was like, ‘this isn’t proper work. This isn’t proper theatre’. I was massively snobbish about the whole thing. I was like, Jesus this is a fucking musical! It just seemed really lame.”

His initial balking at the prospect of a musical was echoed by Glen Hansard, one of the stars of the movie and the co-writer (alongside Markétá Irglova) of the songs that made such an impression with audiences worldwide. Hansard’s fear was that the story, and his songs, would lose intimacy amongst a big musical production.

He saw the potential for “jazz-hands”. The musical’s director, John Tiffany, who brought Walsh onto the project and, like the playwright, had no background in the musical form, also viewed the project as a risk. “Myself and John met Glen in New York in 2010 and we had a chat about doing the musical,” Walsh recalls. “Glen was shitting a brick in fairness. He was going, ‘what the fuck? I mean guys, this isn’t going to be shit is it?’ We were going, ‘listen it could possibly be shit. It could definitely possibly be shit and if it is, we’ll pull out... but there’s something in it’.”

Describing the movie as “Brief Encounter for a younger generation”, their biggest concern was in losing the intimacy of the “deceptively simple” story of a brokenhearted Dublin busker (known only as Guy) who becomes revitalised by his friendship with a Czech immigrant (Girl).

“We could have actually ended up missing the whole delicacy of it,” Walsh says. “You look at it on paper and you just think, ‘this is not an idea that’s going to work’. I mean the film is effectively a two-hander. There’s very sparse dialogue. The plot-line, as such, is just incredibly small and it’s all in the sub-text. All in what’s not being said. As most sort of love stories are.

“All that stuff you can do on stage, but the pitfall is in actually putting something on-stage, without making it this ‘big thing’ – and theatre sort of has to be big to survive onstage. Also, I loved the film so much I was just scared that we were just going to mess it up.”

Walsh’s self-confessed snobbery was, he says, “blown out of the water fairly quickly”.

“I was like, you know what I’ve been a fan of The Frames [Hansard’s band] for a long time and I think that Glen is a great songwriter. I think that the movie is beautiful. For me it also came at a really great time because my own sort of work  has been getting darker and darker. I don’t know why, but it was a joy to spend some time on something so sweet - and so uncynical. It’s been extraordinary.” 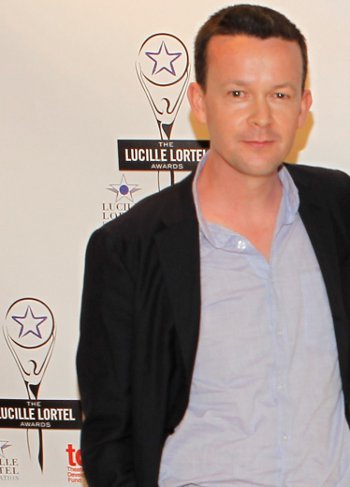 Walsh’s background of dark plays such as Misterman and Disco Pigs made him, alongside Tiffany, an unlikely choice to bring a musical to the stage but he says it was this fact that was comforting to the original team behind the movie, rather than being a factor of concern.

“I never even met John Carney until we opened on Broadway,” says Walsh. “I think he just let us at it. In fairness, John doesn’t know anything about theatre and neither does Glen or Markétá. And they were very sort of gracious. They really dug that we [himself and John Tiffany] took it on and we were a very sort of unlikely creative team to take it on.

“The thing also unlocked itself very quickly,” he continues. “I mean we read John Carney’s screenplay and went, ‘well how do you do this on stage’. Very quickly we had that sort of conceit of, well let’s just do it really poor. Let’s do a presentation so that it’s really understated.

"It goes back to this type of community theatre where the actors just sit on the side and wander in and out. Everything needed for the performance is really just there. There’s nothing hidden. That communal nature of it seemed a real good ‘in’ for us. We just followed our noses, to be honest.”

First meeting in 2010 to read through Carney’s original film script, Walsh and Tiffany turned around the project in 15 months — from initial conversation to opening on Broadway.

“The whole thing was so fast,” Walsh says with pride. “These things apparently take fucking years to do. I mean we’d never done a musical before, but myself and John don’t sort of like hanging around. So it happened really fast. From the time we read his script to opening on Broadway, it took 15 months, which is an incredibly fast time because we’re working on – myself and John – two other shows. So you’re hopping in and out. But we pulled it together that fast, which everyone was sort of like ‘wow’ about.”

In adapting the play Walsh’s key consideration was to “really charge the songs” in terms of the story.

“I wanted to make the songs narratively speak,” he says. “What you learn is that actually what I do is all the jabber. The blah, blah, blah carry-on! And actually it’s the songs that are the soliloquies and you really want them to have impact. There’s something really interesting about musicians.

"You know, I got to know Glen and he’s such a gorgeous guy. When you’re talking to him he’s just so massively down to earth. He’s a really simple, easy-going guy. A plain-speaking kind of guy. Then you hear his songs and it’s like, what the fuck is that all about? Where did that come from? It’s really beautiful poetry. And there’s something for an audience in looking at that. They can read that. And these songs, acting as sort of soliloquys, make them go, ‘well actually now the character is beginning to talk’.”

The musical has a larger, communal feel than the movie. In Walsh’s adaptation there are fuller roles for cameo figures in the movie. There’s also a more significant role for Dublin as Walsh draws out the city in a larger way than Carney did, depicting a city wounded by the recent economic woes.

“I felt that I needed to give it a geography,” Walsh says. “I needed to place these characters somewhat. In the film it’s like, wherever. It’s shot in Dublin but there’s no reference to it. When you’re on stage, however, I wanted the characters to reference it and I wanted Dublin to be a character. The guy who runs the music shop in it, I wanted him to be Dublin. I thought that’s Dublin for me – something sort of brash and then... really lost at times. 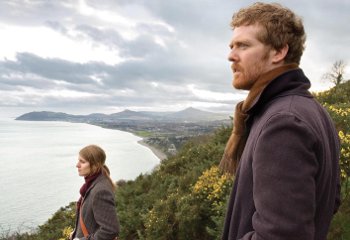 Marketa Irglova and Glen Hansard in Once

“But all of this is arrived at afterwards,” he continues. “I don’t sort of sit down and think about it. I see it in retrospect that that’s what that character is doing and, I suppose, what the Guy character is.

"Plays for me are always about characters who are inarticulate and then they learn to talk. They figure out in their heads what’s right or whatever and then they begin to walk in a different direction.

"So this is the same form that I’ve been writing. Tonally it’s quite different but it’s exactly the same story – the story of learning to do stuff; of ‘yeah maybe I can do it, fuck it I will do it, I’ll walk this path’.

“At the same time I wanted it to be about a community as well and about the city. I haven’t lived in Dublin for a while but then I found myself sort of – after the event – looking at it and thinking, oh yeah, it was a little love letter to Dublin.

"Living away from home and seeing what’s happened to the city and all of that. My dad lived through a recession. He was in the furniture business and lived through all of that. There was certainly a bit of that, of going ‘I’ve just been stung by something’. I didn’t want to write all over that and go, yeah this is a musical about the recession. It’s not. It’s just about people and their capacity to do really good things, and to make really sort of amazing stuff; To come together and talk with one another and have these sort of friendships. These are very sort of basic sweet things, but really fundamental. It became about that I suppose.”

While Walsh first made his name in Cork with the 1997 play Disco Pigs (which began a lasting working and personal friendship with actor Cillian Murphy), London has proved the city of his most prolific output. “I just love the motor of London,” he says enthusiastically.

“It really drives you on and makes you work a little bit harder, for me anyway. In London you basically have to have your head about you or else the city will gobble you, and I really, really like that. I think in Ireland, certainly in Cork, I might have just relaxed a bit and went ‘ah sure I’m grand’.”

While the aforementioned Ballyturk will be his next work to hit the stage, he’s also teamed up with another fine songwriter for a second musical, this time for the big screen.

Once: The Musical is now running at the Phoenix Theatre, London and is booking until December.