I REMEMBER my big brother giving me his old copy of Philadelphia, Here I Come!

I had no idea who Brian Friel was, nor would I have cared if you had told me. I was in love with Kurt Cobain and the bassist from Blur; the idea of reading a play during the summer would have elicited an eye roll at best. But my brother told me I’d like this one.

His copy was covered with brown newspaper and heavily marked inside. I moaned to my mum that I wanted a new copy before school started back, not another cast off, but none of that mattered when I got bored one day, picked it up and read it all.

To a moody teenager from Cork, the play’s hero, 25-year-old double act Gar O’Donnell, was a hero — a messer with a wild imagination who couldn’t talk to his parents and wanted to escape his little town (the uninspiring fictional town of Ballybeg) for America. “I’ve stuck around this hole far too long. I’m telling you, it’s a bloody quagmire, a back­water, a dead-end! And everybody in it goes crazy sooner or later! Everybody!”

Gar pillories his dad (old Screwballs), the clueless Canon and the snooty Senator behind their backs. He hated authority, and I loved him.

There were references I didn’t understand (like the ones to Burke’s French Revolution) but it didn’t matter — to a teenager who was one person in front of my parents and quite another in front of my friends I got the conflict between Private and Public Gar perfectly. He was my Holden Caulfield.

When term time rolled around and the scratchy school jumper was pulled out of the drawer, I was the first in the line of outside the English classroom door. 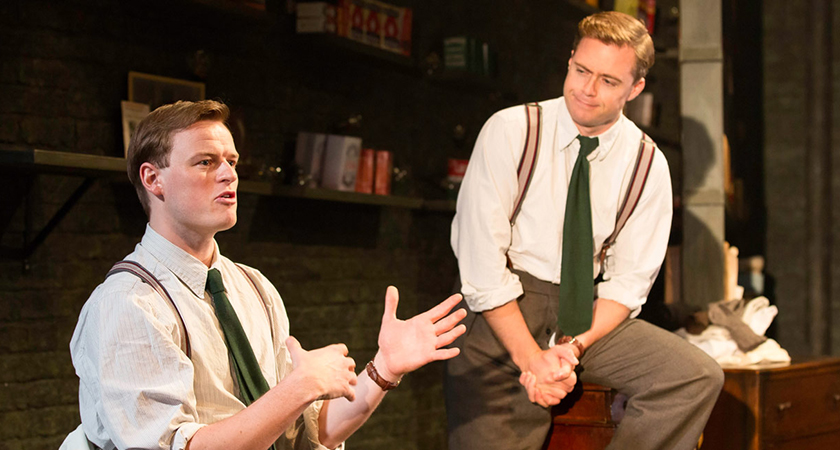 Paul Reid and Rory Keenan in Philadelphia, Here I Come! at the Donmar Warehouse in London

Now I look back with even more appreciation at the way ­Friel ripped down the curtains hiding the goings-on in Irish homes with piercing parody and humour. The Canon, the symbol of the Catholic Church, all it’s pomp and ceremony and utter failure to act when really needed is verbalised perf­ectly in Gar’s words. “You could translate all this loneliness, this groping, this dreadful bloody buffoonery into Christian terms that will make life bearable for us all. And yet you don’t say a word. Why, Canon? Why, arid Canon? Isn’t it your job? — to translate?”

But the most haunting thing about Philadelphia for me is the way Friel shows how the chatty Irish sometimes fail completely to say anything of meaning to the ones they love most.

The night before Gar leaves he imagines a conversation he can’t have with his dad: “You know why I’m going, Screwballs, don’t you? Because I’m 25 and you treat me as if I were five — But worse, far worse than that Screwballs, because we embarrass one ­another… and even though I’ll be on that plane ­tomorrow morning I’ll have doubts; maybe I should have stuck it out; maybe the old codger did have feelings...”

Inside, Gar is screaming for the things we all crave — love and ­acceptance. Now as an adult, having already known far too many young Irish men who have committed suicide because they were angry inside, or couldn’t communicate, Gar’s words still go through me like a knife.

I still knew embarrassingly ­little about Brian Friel when I found out he died last week; yet despite being out of school for more than a decade I still remember large chunks of my favourite of all his plays by heart. Somehow, I reckon that’s the way he would have wanted it.