BILL MURRAY is completely embracing life in Ireland as he visits the Emerald Isle as part of a new TV series.

Like Matt Damon before him, who shopped at Supervalu and became a regular in a local café when he stayed in Dublin during Ireland's first lockdown, and like Patrick Dempsey who explored the Irish countryside and sported a traditional Aran jumper while filming a new Disney movie in Wicklow, Bill Murray is the latest American actor to fall in love with Ireland.

The Groundhog Day and Ghostbusters star-- as well as many more too numerous to name-- is in Ireland to film a new TV series around golf, which will showcase some of most impressive courses in the country.

Most recently, Murray has been in County Mayo, teeing off on spectacular courses, meeting fans, and declaring his support for Mayo in the upcoming All-Ireland final as he posed with an absolutely massive red-and-green flag. 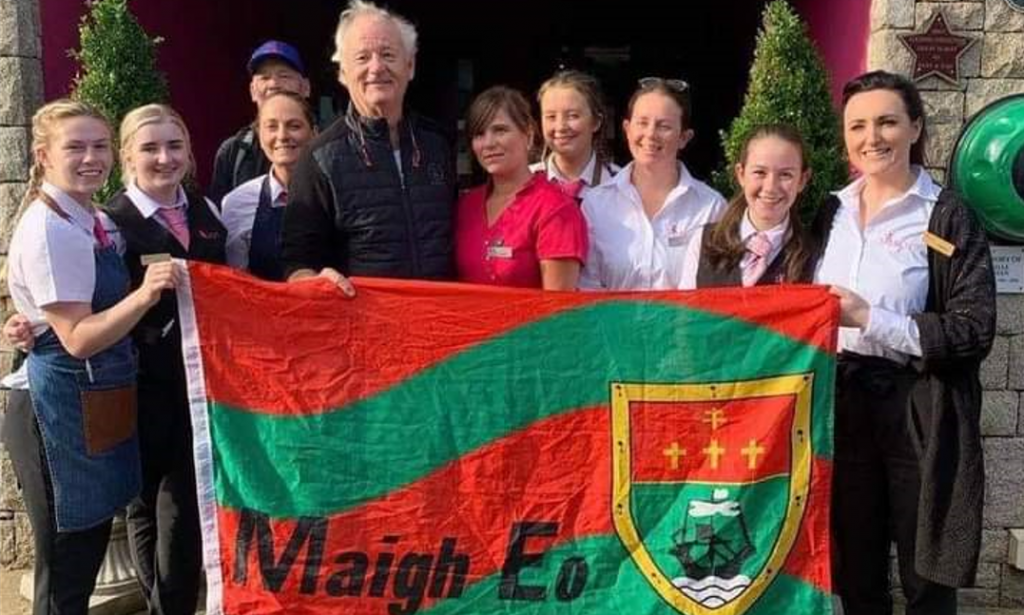 Murray for Sam: Bill Murray poses with a Mayo flag ahead of the All-Ireland final next month (Twitter)

Now the Hollywood actor has again voiced his support for Mayo--and could soon be the new owner of a coveted signed jersey.

Mayo woman Jillian McNulty shared a video of herself with Murray, who confirmed he had entered the raffle, which is being organised to fund research into Cystic Fibrosis.

In the video, Murray teases-- but does not quite say-- that he will be supporting Mayo in the final clash, but says he has entered the raffle for €5-- and even gets Ms McNulty to do a bit of a jig.

Ms McNulty has organised the raffle and fantastic prize in order to raise vital funds into Cystic Fibrosis research.

The draw will take place on 4 September, one week before the nail-biting final-- to enter and be in with a chance of winning the unique Mayo jersey, you can check out the Facebook page here.