MEET THE MAKERS: Artisan food producers, brewers, chocolatiers and butchers across the island of Ireland

IRELAND’S burgeoning gastronomic reputation is due, in no small part, to its legion of artisan food producers, craft brewers, confectioners and distillers.

Every county has its specialists in some niche of the food or drinks chain, and increasingly their produce is available to order online.

Everything from smoked salmon to handmade chocolate, and from black pudding to creamy fudge, is on offer.

Here’s just a few to give you a flavour…

Some of the very best venison available in these islands is produced on the Finnebrogue Estate just outside Downpatrick in Co. Down. Finnebrogue Oisín (‘oisín’ is Irish for young deer) is the meat of young deer between 9 and 21 months of age, from Finnebrogue’s free roaming herd of red deer. It’s like beef, although gamier, and tastier than a lot of supermarket steaks. Alternatively, go for the organic sausages or bacon.

Forthill Farm outside Tandragee in Co. Armagh supplies the best of quality free-range pork and beef from traditional breeds. These include Belted Galloway and Longhorn Cattle, Gloucestershire Old Spots and British Saddleback pigs. Many experts and connoisseurs agree that these older traditional breeds tend to produce meat of superior quality compared to that of ‘modern’ hybrid types. Order up a few joints and see what you think.

The Bullhouse Brew Company of Belfast is an environmentally sustainable brewery. They use local suppliers wherever possible for raw materials — the ones that go into making any good beer. All the base malts are grown in Ireland, but the Irish climate doesn’t support the growth of hops, so these have to be brought in.

The beers are carbonated naturally using carbon dioxide produced during fermentation. So just by downing a few pints you’re helping to get rid of CO2 from the atmosphere.

Bullhouse has also eliminated tank-to-tank transfers further reducing the environmental impact. So you can sit back with a few cans of Bán — a vegan beer flavoured with coriander and orange peel (six cans for £19) — and congratulate yourself that you’re doing very little to increase your carbon footprint. After six cans, that footprint could be a little unsteady, but environmentally sound, nonetheless. 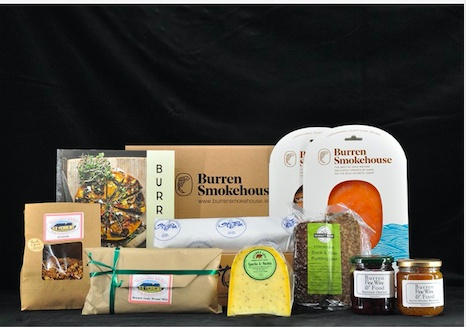 The Burren Smokehouse produces a wide range of artisan products

The Burren Smokehouse was established in 1989 in Lisdoonvarna, Co. Clare. Peter and Birgitta Curtin started out by smoking and curing salmon — a delicate process when done properly, and later branched out into mackerel, trout and eel.

Today the company is a multi-award winning concern. The Smokehouse’s cold smoked organic salmon with seaweed is a perennial favourite, not to mention a Gold Medal winner at the Great Taste Awards.

With more than a hundred years of growing fruit under their belt, this family-run business certainly knows its onions when it comes to apples. Barnhill apple juice is a blend of traditional varieties grown, harvested and pressed on the family farm. This naturally cloudy juice is made exclusively from whole fruit, with no added preservatives, sweeteners, colourings or water. New flavours have been created by blending apple with the juice of other whole fruit such as raspberry, blackcurrant and blackberry.

Offering a range of cheeses, Dart Mountain was set up by husband-and-wife team Julie and Kevin Hickey in 2011. They use milk sourced from the Sperrins Region of Tyrone and Derry, and the company now produces a range of different cheeses including Carraig Bán, an Irish goats’ milk cheese and Sperrin blue cheese, a rich creamy cow’s milk cheese with blue veining. These have been awarded a collection of titles including gold at the World Cheese Awards and silver at the UK & Irish Artisan Cheese awards. 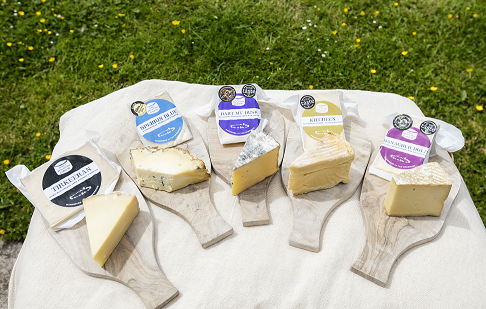 Creamy, buttery fudge from the Aran Islands. Tomás Póil grew up on Inis Oírr where his grandma made a toffee mixture that was heavenly, one that, ahem, stuck in his memory. The sweet nostalgia of childhood never left him and today Tomás uses that toffee heritage to make the very finest of fudge. He produces 24 flavours in all (most are gluten-free) including his original granny’s recipe.

For over 22 years Crossogue Preserves has been producing a range of jams, jellies, marmalades, curds, chutneys and coulis. Still 100 percent hand-made on the Crossogue family-run farm near Thurles in Co. Tipperary, the preserves are now reaching an international market.

The Chocolate shop began life in the English Market in Cork more than 20 years ago. Today, everything chocolatey is on offer: milk chocolate, dark chocolate, chocolate-covered nuts; chocolate covered coffee beans; chocolate for cooking & baking; drinking chocolate; chocolate lollipops; chocolate & marzipan; chocalate & nougat. They used to say that there’s nothing so foreign as another country’s chocolate. Not true anymore — there’s just mass-produced stuff, then there’s handmade chocolate like The Chocolate Shop produce . And it’s not hard to distinguish one from the other.

Olly’s Farm produces 100 per cent raw Irish honeys, including Dalkey Blosson and Dublin Mountains Heather. Olly has some 180 apiaries around South Dublin and North Wicklow. ‘Raw honey’ means that the honey has minimal processing and is not pasteurised in any way. It is sweet, delicious — and just about the most storable foodstuff you can get. Most microorganisms do not grow in honey, so sealed honey does not spoil, even after thousands of years.

Clonakilty Blackpudding is basically state-of-the–art sausage meat. The ‘pudding’ part, needless to say, has nothing to do with desserts. In this context the word is believed to derive from the French boudin, originally from the Latin botellus, meaning ‘small sausage’.

Clonakilty Blackpudding was first made in the 1880s in the Twomey family butcher shop in Clonakilty in west cork. To this day it’s still made using the same recipe — the secret spice mix has remained secret.

Boxty, various kinds of potato bread and pancakes are all available from this award-winning Co. Leitrim family-run business. 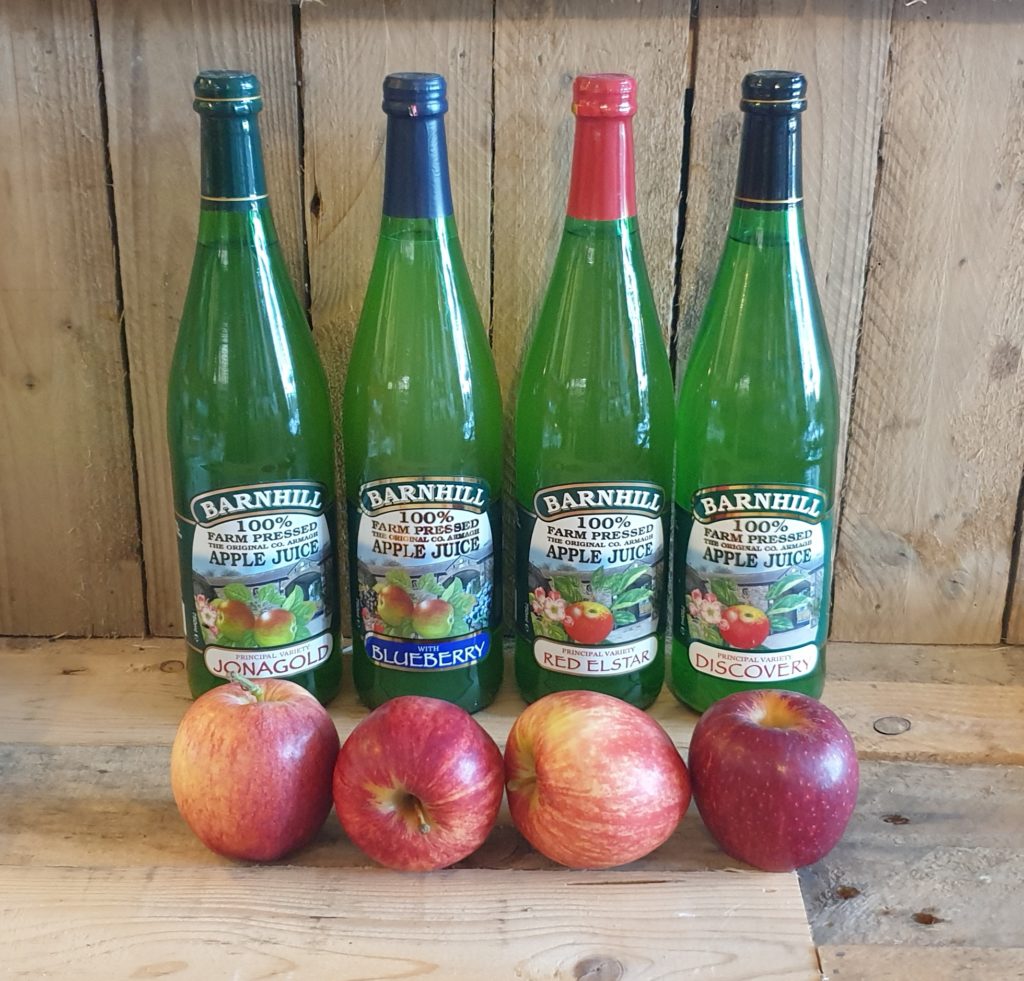 The Keogh family has been farming in North County Dublin for over 200 years, and have been making artisan crisps and popcorn for ten years. You can order the likes of crinkle cut Irish cheddar and red onion, or Irish Sea salt and crushed black pepper flavour. All exceedingly moreish.

Earth Rainbow is a plant based cold pressed juice and food company, based in county Down. Its ethos ‘You Are What You Absorb’ is demonstrated through an expanding wide range of mouth-watering juices, granolas, power balls and Nut Mylks, free from HPP and Sulphites.