MILLENNIAL entrepreneur Declan Holmes has not exactly followed in the footsteps of his father – TV personality and respected broadcaster Eamonn Holmes - but he has embraced his family’s mantra of forging ahead with passion.

The former Queen’s University Belfast Film Studies graduate worked in the drinks industry for almost a decade – he was a cocktail bartender during his university years - before launching his own brand.

“The Nightcap Group focuses on the development and wholesale of local food and drink brands based in Northern Ireland,” he says.

“It’s a dynamic agency geared towards marketing and sales. Not only do we represent existing brands but have developed our own, including Gallopers Craft Beer.”

Entrepreneurship has run in the Holmes family for generations.

“In many different sectors of business,” Holmes says. “From carpet fitting to industrial manufacture I have grown up around strong, independent, proud family members forging successful careers for themselves and this heritage certainly spurred me on to establish my own business.

"I had always imagined I would go into the world of media as a career because of my dad but upon graduating I had other plans. I began by providing bartending services for small parties at home, this developed into larger parties and corporate functions rather swiftly.”

Working with the best local products has been a real driver for the Belfast-based man.

“We truly have some amazing things happening right on our doorsteps that not enough people know about,” he says.

“It was this desire to support local business that has led me to where I am today with my own beer brand and an amazing list of clients that we love working with.”

Holmes embraces his Irishness – proud to be part of a small nation that punches above its weight around the world.

“Who doesn’t love the Irish!” he jokes.

“I have found that being Irish has certainly helped me in the industry, particularly for export opportunities.

"I believe we are held in high regard worldwide for what we have and continue to produce in all sectors from food and drink to the arts and sport.”

With a desire to stay ahead the curve -‘‘you can’t rest on past achievements” - Holmes says social media is playing a huge part in his company’s success.

“Like a lot of businesses we see social media as our main platform for marketing and advertising,” he says.

“It really is a full-time job with so many platforms. My brother looks after that for me, which is great.

"He’s a lot more technologically gifted than I am so it’s wonderful to have his help and be able to work with family.”

The success of the next generation is a testament to the work ethic of the Irish who have embraced that entrepreneurial spirit in decades past.

Well-known personalities and business leaders such as fashion designer Paul Costelloe, world champion boxer turned promoter and trainer Barry McGuigan and chef Richard Corrigan, have all inspired their children to join them in business and carve out their own path to prosperity.

Corrigan’s son – also called Richard - took over as general manager of Corrigans Mayfair this year, while his daughter Jess helps out with the company and is building a career in food PR. Corrigan’s sister meanwhile has been appointed to oversee weddings at Virginia Park Lodge in Ireland.

“I always hoped that the family would come into the business and it now it looks like I might get my wish,” the award-winning chef said. 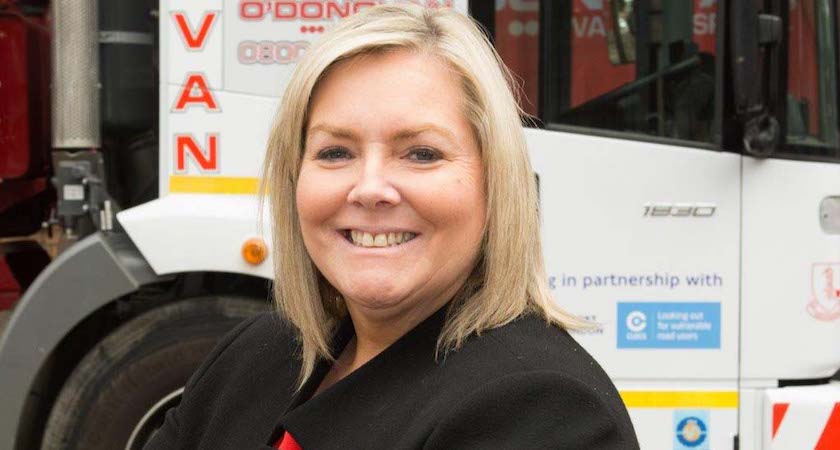 Jacqueline O’Donovan knows more than most the struggle that often comes before success.

“Mum and dad came over in the 50’s when the No Dogs, No Blacks or No Irish were displayed in windows,” says the Managing Director of O’Donovan Waste Disposal, whose roots lie in Co. Cork.

“They tried different areas heading up North at one stage until they settled in Kilburn, where all six of us lived in a one bedroom flat.”

“Being the youngest I have vague memories but my older brother tells many a story about the gangs and how they had to protect their patch and how I would have my sister's clothes handed down as things were tough in the 60s.”

Founded in 1959 and based across five sites in North London, O’Donovan Waste Disposal Ltd aims to lead the way in safe, green and efficient waste operations across the city.

O’Donovan has embraced her roots as part of the Generation 2 Elephant Group - a gathering of like-minded people who meet regularly to discuss the highs and lows of life in business.

Anita Brightley-Hodges from Family Business Place – a network for family-owned businesses - had a request from two women, both second generation Irish, to set up a G2 group so they could bounce ideas and thoughts - both positive and negative - that affect them in their roles.

There are now about 16 members.

“It’s important as we have been brought up in our culture not to advertise issues, or air your dirty linen in public, but to deal with it within the family,” O’Donovan says.

“So the group is like an extended family. Chatham House rules apply and we are at different stages of our careers so we all can contribute in some way to make a difference to someone in the group.”

O’Donovan’s Irish identity has played a major role in her approach to running a business.

“It has shaped my career a tremendous amount, there is no secret that the Irish are tough and have been brought up to get on with things, and that has been the philosophy that I have adopted, and taught,” she says.

“If I hadn’t I probably would have been swallowed whole years ago.” And yet she feels there is more to be gleaned from that Irish connection.

“I always ask ‘where you from?’ if I hear an Irish accent, but being brought up in London it’s not something I have, so that immediate connection is not always there. I think as a nation we strive to improve instinctively and are built to reach further and set goals,” she adds.

Her hope for the next generation is simple.

“That they follow us as we did our elders,” she says. “And use the same blueprint of honesty, integrity, hard work and maintaining relationships, this is paramount. And to remember always where it all began - back in Ireland.”

Following waves of emigration from Ireland over the decades, it is perhaps no surprise that some of the biggest companies in Britain are now run and led by the second and third generation. 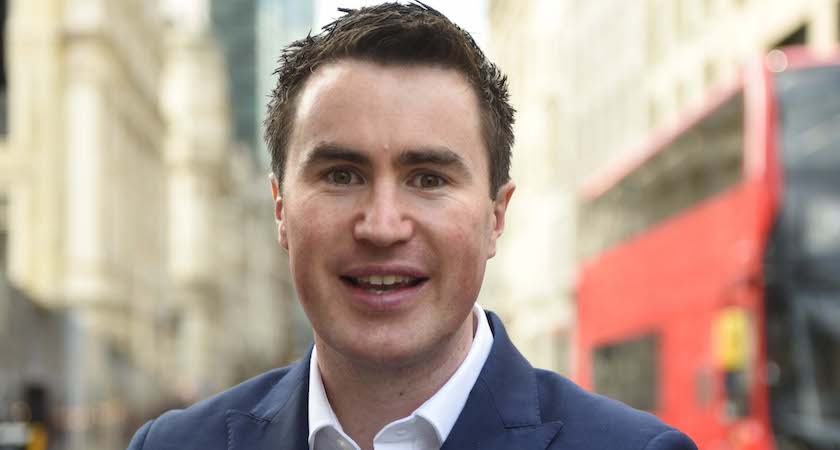 “My dad is big into family values and one thing he always says is never forget your roots, never forget where you came from,” says Timothy O’Sullivan, Managing Director of the Danny Sullivan Group.

The London-born Kerryman joined the family business in 2011 having worked his way up the construction ranks with other firms.

O’Sullivan, who left Britain aged four and grew up in his father’s home in Co. Kerry, took note of his dad’s path to success, determined to follow in his footsteps and eventually returning to the English capital following his university education in Ireland.

“My father came to London at the age of 16 and didn’t have a whole pile, he came from a farming background,” O’Sullivan says. “He came to London and worked in construction, spent a while with his uncle working for the Murphy Group, and then decided to go out on his own.

“I did a degree in construction management for five years and as part of that I had to do a placement and applied to one of our clients, Balfour Beatty,” he says of his own path in the industry.

“I spent six months with them on a job in London on the East London Line and after that they off ered me a scholarship. I came out with a 1.1 in my degree, a first class, and then took Balfour up on their offer of a scholarship and graduate programme.

"Looking back, it was an invaluable experience from my perspective, being on the other side of the fence and getting to understand what clients expect from the supply chain – it has really informed my approach to client service.”

The Danny Sullivan Group, which celebrated its 30th anniversary in 2016, started from humble roots and has now grown into a company that is involved in some of the biggest construction projects in the country - from Crossrail and Hinkley Point to major highway jobs such as the M25, M4 and A14.

"My father started with about 10 men and went from strength to strength. Now we have over 1,500 people working for us right across the UK,” O’Sullivan says. “At the time it was tough going for him, it wasn’t an easy time for the Irish in the 70s, but one thing my father has is a great work ethic and a real desire to succeed.

And one thing we always say is we wouldn’t be where we are without the people around us.”

And it has been that sentiment that has rung most true over the last few months, when the O’Sullivan family faced, perhaps, the most difficult time in their lives.

In June 2017, patriarch and founder Danny O Sullivan, 63, suffered a brain haemorrhage. The family were initially told to expect the worst.

His sudden illness was a shock to all the family,” son Timothy says, but over the past few months he has been making huge strides in his recovery much to the family’s relief.

Danny is continuing his recovery at the National Hospital for Neurology and Neurosurgery (NHNN) in London.

As a thanks to those who helped save Danny’s life, Timothy and his partner Kacey took on the ‘Ride Across Britain’ cycle – a 969mile cycle challenge – traveling the entire length of Britain from Lands End to John O’Groats in aid of the National Brain Appeal, the fundraising arm of the NHNN.

With his father now on the road to recovery, O’Sullivan says the future is very bright for the Danny Sullivan Group.

Since 2011 he has been at the helm – fulfilling a father’s dream for his son to join the company he built from the ground up.

“It’s big shoes to fill from my perspective, one of the things I wanted to do was prove myself, that I wasn’t coming in here with a silver spoon,” he says. "Just getting the job for the sake of it.”

Since joining the family business, Timothy has brought his own ideas and enthusiasm to the role.

“I’m really happy with the direction the company is going. I have a great relationship with our clients and it’s an aspect of the work I really enjoy – getting to know and understand them and their needs and how we can best support them.

"Digitisation and innovation are big themes for me, in terms of IT, our fleet, getting economical vehicles for sustainability. We want to grow and be the leader in our field, be a modern and progressive company but my goal is to do that whilst always staying true to our values.”