Chef Laoise Casey on spending Christmas with the family, not in the kitchen

FOR me, Christmas Day is all about being lucky enough to spend it with my family and friends.

When you live abroad, coming home for Christmas is the sweetest present.

My first memory of cooking on December 25 was sitting at our wooden table, while my dad peeled spuds over the sink, with our kitchen knife, and its worn out white plastic handle.

He always insists on peeling potatoes with a knife, never a peeler.

I would watch as a mountain of peelings built up and then help him roast the potatoes in a large black tray (with duck fat, sprinkled with salt and lashings of cracked black pepper).

We eat them torn open and dotted with a little butter and we invariably make too much – although they never seem to last until the next day.

On Christmas Eve my mum boils my Granny’s spiced beef. We scarcely leave it to cool down, slicing off thick chunks of it.

Then on Christmas Day my role is to play the loyal supporter/spectator for my dad as he goes for his yearly swim (more of a dip) in the Forty Foot in Dun Laoghaire.

Afterwards we return home and spend the rest of the day eating, chatting and watching old films.

There is always talk of a brisk walk after dinner but that soon fizzles out when someone opens the box of chocolates we were meant to be saving until the next day.

By the time the Christmas pudding is rolled out, simmering for hours in the slow cooker (doused in brandy, with a side of brandy butter) I’m quite happy to just sit back and relax.

This for me is what it is all about.

Without fail, we all fall asleep after dinner, sitting on the couch in front of the warm fire.

It’s the one day where I like to forget about the rest of the world and stay out of the kitchen, despite my mum’s best efforts to get me in there. Perhaps cooking on Christmas Day can often invoke fear in even the most calm cook.

There is the added pressure and stress of having to cook for relations and create that perfect feast.

In my first London restaurant, The Ship in Wandsworth, I experienced prepping at a high volume in December.

Each day we would roast off gigantic trays of potatoes with rosemary and thyme, batons of carrots and parsnips glazed with honey, and row after row of turkey crowns and malt baked hams.

By the time I made it home that year on Christmas Eve I was quite happy to pass the cooking baton over to my mum. 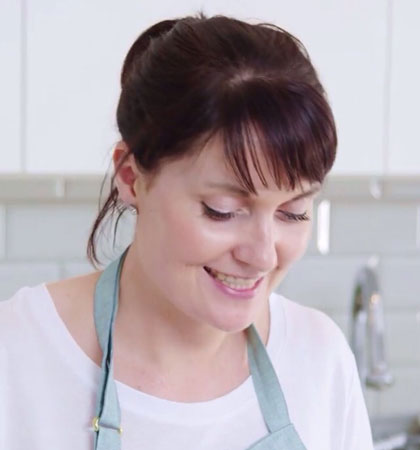 Laoise Casey is a chef and writer from Dublin now living in East London. In her former life she was a human resources manager.

After completing a diploma at Leiths School of Food and Wine, Laoise worked at The Dairy in Clapham for two years and now works at Paradise Garage in Bethnal Green.

She also works as a freelance food stylist and writer, including a regular column for the Evening Standard. Laoise writes for various publications including The Irish Post, The Irish Times and The Independent. She has been featured by The Guardian and Hot Dinners.

She has recently launched a Kitchen Essentials series with the YouTube channel, Wild Dish, which features step by step videos to basic cooking techniques including how to make a vegetable stock, sweat onions and make yoghurt.

In 2017 she will be teaching at Leiths School of Food and Wine.

Keep an eye out for Laoise on RTÉ One’s Nationwide in a special edition, which will be aired in January, about the Irish in London.

An Irish pub is offering free dinners to the homeless, elderly and families in need this Christmas