LOOKING for a new holiday destination?

Why not let the legend of Bigfoot, The Loch Ness Monster or even tall tales of fairy folk entice you on an adventure like no other.

A new guide, devised by VacationRenter, outlines the best spots in the world to hunt global folklore while experiencing the history, culture and mystery that each location has to offer along the way.

Here is the full list of their adventure-worthy locations - all you have to do is decide which story you want to chase and book your ticket.

The legend of Bigfoot traces back to Native Americans and loggers in the Pacific Northwest with tales full of a giant, muscular, ape-like creature who hides from humans in the woods and leaves behind enormous footprints. He is rumoured to spend time roaming the mountains of Oregon, Washington and British Columbia, but sightings have been reported throughout North America.
To maximize your chances of spotting Sasquatch, travel to Washington state, leading the charts with 2,032 reported sightings. Hike down to Ape Canyon, where a group of miners recorded a particularly vivid run-in with Bigfoot in 1924 that helped the legend take root and spread across the country. The hike lasts about 3 to 4 hours, and the canyon offers gorgeous, wide views of the southeast side of Mount St. Helens. To continue your Sasquatch hunt, head two hours north to Mount Rainier, located in Washington’s Pierce County – an area chalk-full of reported Bigfoot encounters.
If you’re not up for scaling the whole mountain, you can take a scenic six-mile walk up to Fremont Lookout, for stunning peak views of several mountaintops. If you work up an appetite, head to the Tall Timber Restaurant to share your tales of Bigfoot over a hearty breakfast, a Sasquatch-sized pizza or a plate of their famous Chicken and Jos.
For a shot at a different angle, head west to Ocean Shores on the coast, where a man recently reported seeing a creature in his property that was “hairy and brown, with silver gray hair on its back” that reminded him “of a giant pile of steel wool.” The man said the creature looked at him, crawled on all fours, then stood up and walked away into the forest. Keep an eye out for his giant tracks as you explore the Spruce Railroad Trail on the shores of Lake Crescent. 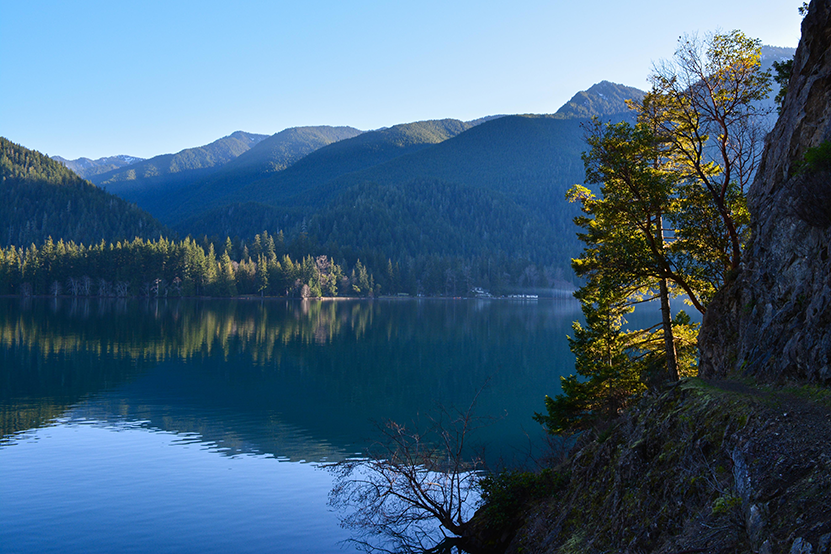 Bigfoot tracks have been spotted on the Spruce Railroad Trail on the shores of Lake Crescent (Pic:Davidthetraveler-Dreamstime.com)

If you’re looking to explore the folklore of the Headless Horseman, Halloween is a great time to visit Sleepy Hollow, New York, where the legend took root. The story begins with a Hessian soldier who was killed during the Revolutionary War at the Battle of White Plains occurring around Halloween in 1776. Decapitated by an American cannonball, troops carried his body away and buried him in the cemetery of the Old Dutch Church of Sleepy Hollow but left his head behind on the battlefield. Rumour has it that he rises at night as a malevolent ghost, furiously searching for his lost head.
Full of twisting narrow roads and 18th century tombstones, visit and tour the Sleepy Hollow Cemetery to see for yourself what comes out at night. If you happen to be there in October, the cemetery hosts readings that feature the works of Edgar Allen Poe and ghost stories by Irving Washington, including The Legend of Sleepy Hollow.

For a night-time bite, head to Bridge View Tavern for local craft beers and tasty plates. If you’re travelling with brave souls, you can also check out Horseman’s Hollow, where the 300-year-old Philipsburg Manor transforms into a haunt-fest led by the Headless Horseman himself, or enjoy a dramatic performance of The Legend of Sleepy in the actual church and courtyard of the legend, just a few steps from the bridge where Ichabod Crane was last seen, never to be spotted again.

Looking to travel in Europe to find your folklore? Dive into Greek mythology and head to Crete, Greece where the infamous Minotaur is said to have lived. The legend begins with King Minos who prayed to Poseidon after he ascended the Cretan throne. To help keep his ambitious, throne-seeking brothers away, Minos asked Poseidon to send him a snow-white bull as a sign of support. When the bull arrived, King Minos was supposed to kill it in sacrifice, but, because of its beauty, he chose to kill one of his own bulls instead. To punish him, Poseidon made King Minos’s wife Pasiphaë fall in love with the snow-white bull and their offspring was the Minotaur: a half-man, half-bull creature who devoured humans for sustenance.  To hide this monstrosity, King Minos hired a famous craftsman names to construct a large labyrinth to hold the Minotaur. As the years and wars passed, Minos required that seven Athenian youths and seven maidens, drawn by lots, be sent to be devoured by the Minotaur. A young hero named Thesus  volunteered, and navigating the labyrinth with a ball of thread, Theseus slayed the Minotaur with the sword of his father.
To visit the rumored home of King Minos and the mythical minotaur, head to the archaeological site of Knossos. The historical landmark is the home to the ruins of decadent palaces and ancient architecture, partially rebuilt to show what life was like in these ancient Greek civilizations. For some authentic Greek fare, grab a bite at Minotavros Restaurant and Café, a restaurant named after the myth, or at Pasiphae Restaurant, named after Minos's wife and known for its historic Minoan dishes. To round out your tour of Greek mythology, discover for yourself which of the two caves in Crete claiming to be the birthplace of Zeus is the actual one, with both the Ideon Cave and Dikteon Cave demanding the honour. Both caves are adorned with intricate stalagmites and stalactites and a total of five well-lit chambers, and they even contain the remains of offerings at an ancient religious altar. 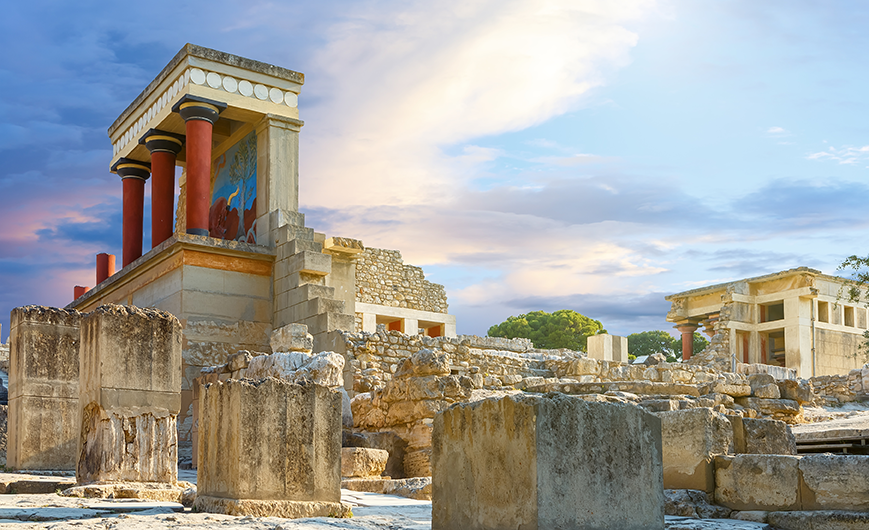 The rumoured home of King Minos and the mythical minotaur is the archaeological site of Knossos (Pic:Vladimir Tomfeev -Dreamstime.com)

The Loch Ness Monster, or “Nessie” as its fondly come to be known, is rumoured to lurk in the Scottish highlands and has been drawing visitors to the deep misty Loch Ness Lake since the 1930s. Stories of this mysterious legend dates back to the 7th century, but didn’t become widely popular until an Englishman from London claimed to have seen a prehistoric beast on the Loch Ness shores in 1934. Locals backed the claim with their own stories and papers picked up the news, prompting people from around the world to visit and photograph the lake in hopes of a sighting. While lots of formal investigations have ensued, no definitive evidence has been found.
If you’re ready to join the hunt to find Nessie, fly into the nearby town of Inverness, travel down to Loch Ness and hop aboarda boat tour of the loch. While you’re in town, visit the Loch Ness Monster Exhiition Centre for an in-depth photo and video tour of the area that includes an explanation of how the geology of the loch could support a creature like Nessie, then grab the kids — or the adults — and head over to Nessie Land where you can explore an entire theme park and playground built around the legend of the Loch Ness Monster. When you get hungry, head to the Boathouse Lochside Restaurant for some pub fare and to hear first-hand accounts from the locals. While Nessie may be good at evading cameras, bring one with you just in case. You never know what you might find.

If Leprechauns exist, they may well be found at Ireland's Cliffs of Moher (Pic: Miroslav Liska-Dreamstime.com)

While they’ve made their way into American cereal boxes and as sports mascots, leprechauns have a long, rich history in Ireland. Known as the Faerie Folk, leprechauns are rumoured to be members of the Tuatha Dé Danann, a mythical tribe in another world who invaded Ireland and were banished to live underground. Legend tells of a trickster two to three feet tall; quick-witted, intelligent and will do anything to evade capture by humans. Known for their love of Irish music and dance, leprechauns are expert musicians and shoemakers by trade. They are so in love with dancing, in fact, that they always need new shoes. It’s believed that if you manage to capture a leprechaun, they’ll grant you three wishes.Leprechauns are said to love their drink, so you can start your search in Dublin at the Guinness Storehouse home to the worldwide beloved Guinness beer made up of only four ingredients: water, barley, hops, and yeast. The Storehouse has seven floors that each offer a unique experience, including the Tasting Experience where you can enjoy the complexity of this rich stout and the Brewers’ Dining Hall which offers traditional Irish food and an open kitchen inspired by 18th and 19th century Irish dining rooms. If you don’t spot a Leprechaun in the city, then head on out to the countryside. Leprechauns are said to live in rural areas away from the general population, so try your luck at the Cliffs of Moher, where scenes from Star Wars: The last Jedi were filmed. The cliffs offer a breathtaking view facing the Atlantic Ocean and are a haven for wildlife, with over twenty species of protected seabirds calling it home. Just be careful near the edge because Leprechauns are known for their trickery.