FOR many reasons – political, cultural and social – there is often confusion about what exactly is meant by the terms United Kingdom (UK), Great Britain (GB) and the British Isles.

Add to that the differences between the Republic of Ireland and Northen Ireland and it's no wonder these two relatively small islands situated off the West of Europe cause so many problems, not just to visitors from far away but to their own citizens.

Here, to get to grips with the nomenclature (a fancy word that means choosing the names for things),  we've enlisted the help of Ordnance Survey (OS) Britain's mapping agency and Dr. David Nally from the Department of Geography, University of Cambridge.

What is the United Kingdom and what countries are in it?

The big hint is in the UK's full name – the United Kingdom of Great Britain and Northern Ireland.

Despite this, Rob Andrews from OS says: “It is surprising how many people use GB [Great Britian] and UK [United Kingdom] in the wrong context when in fact there are significant differences between the two. This is probably one of the most frequent questions which OS are asked.”

So to set the record straight, the UK  refers to the "political union between England, Wales, Scotland and Northern Ireland."

The UK is a sovereign state, but the nations that make it up are also countries in their own right.

Dr Nally points out that England itself is not a sovereign state – it is just the largest country in the UK.

Gaining our independence from Britain was a pretty big deal, hence Irish people tend to get tetchy if you refer to them as British. But more on that later... 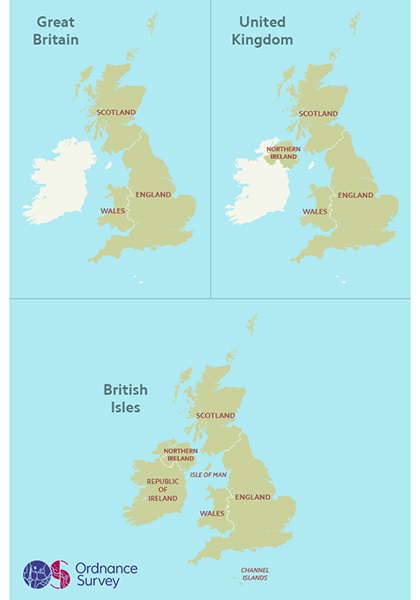 What about Great Britain – what's the deal with that?

Great Britain is the official collective name for the landmass encompassing England, Scotland and Wales and their associated islands.

Take note – Great Britain does NOT include Northern Ireland and therefore should "never be used interchangeably with ‘UK’", something the team at OS say happens all too often.

Technically, if you lose the ‘Great,’ Britain only refers to England and Wales.

Dr Nally helpfully explains that Great Britain is not a sovereign country but a geographical designation to signal the whole island rather than its distinguishing parts.

So far so great.

The British Isles - a bit of a touchy subject

According to the OS (and some of you are not going to like this but read on...) the British Isles is "purely a geographical term".

It refers to a collection of islands in the Atlantic to the Northwest of continental Europe – including the Republic of Ireland (it's ok, breathe, breathe) and the 5000 or so smaller islands scattered around our coasts.

Back to the British Isles – "Remember" warn the OS, "this only refers to geography, not nationality, and while the Republic of Ireland is part of the British Isles, its people are not British – a very important distinction."

Dr Nally adds: "Many Irish people (though not all) bridle at the designation British Isles; they see the term itself as a act of cultural imperialism. For this reason, many prefer substitute terms like 'these islands'. To them it is a more neutral designation than the politically charged British Isles." 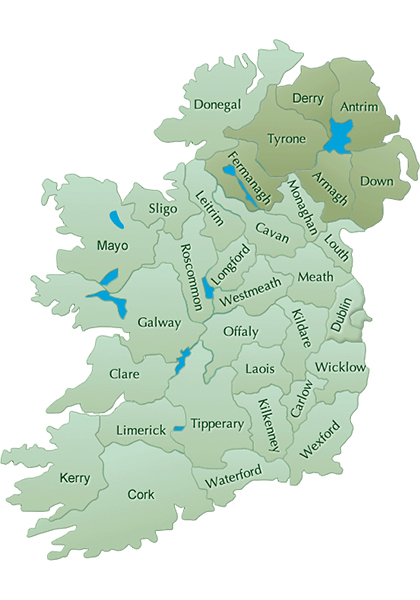 The island of Ireland is made up of a total of 32 counties (see right if you want to know all their names).

The Republic of Ireland (all the sections in light green) is made up of  26 counties.

The reason for the split occurred in 1922, when Ireland was declared a Free State.  "It was still something short of a fully sovereign state" says Dr Nally. "In 1937 the constitution was drafted but not until 1949 was the Republic of Ireland declared."

So, the Republic of Ireland = 26 counties. We all speak English (and some of us speak our native tongue of Irish too), our currency is Euro (not British pounds) and we are a nice bunch, promise.

Got it, now tell me about Northern Ireland

Northern Ireland refers to the six counties in northeast of Ireland (See dark green portion of the map).

The North of Ireland is a political division of the UK, so the six counties use sterling (not Euro) and speak English.

The last census figures from 2012 show a population that is 48 per cent Protestant, 45 % Catholic and 7 per cent who either belong to another religion or none.

Important to note that many people in the North also identify as Unionist (in favour of the union with Britain), republican (want a united Ireland) and nationalists (who believe the Irish people are a nation and generally, but not always, support the idea of a united Ireland).

Since the Good Friday Agreement was signed back in 1998, thankfully things have been pretty peaceful in the North, and that's the way everyone, be they Protestant, Catholic or I'd Don't Believe In God At All Thank You, would like to keep it.

And finally, a very important and sensible message from Dr Nally that everyone should read

"We use words like 'formed', 'declared' and 'created' to describe how these political and geographical entities came into being when in reality they were often the outcome of wars and conquests - battles whose origin and meaning are still subject to different and quite often hostile interpretations.

The complex history of geographical naming helps to explain some of the more vexed questions about identity politics today. Take for example the fact that many members of the Unionist community living on the island of Ireland see themselves as 'British' and 'Irish' at the same time, or the fact that in recent years many communities in Scotland see themselves as Scots rather than British. The geography of identity is clearly not a straightforward matter!"

At least on that point, we can all agree.