AN inspiring Irish woman has shared the story of her dual heritage while revealing her experiences as an Irish nurse in Britain.

Professor Dame Elizabeth N Anionwu is the Emeritus Professor of Nursing at the University of West London.

She contributed to opening the first sickle cell and thalassemia counselling centre in Britain, helped create the Mary Seacole Centre for Nursing Practice at the University of West London and is a fellow of the Royal College of Nursing.

She is also a proud Irishwoman; who was born Elizabeth Mary Furlong in Birmingham in 1947, to her then 20-year-old middle class Irish mother Mary Furlong.

Her father was a Nigerian man who studied with her mother at Cambridge University.

“The title of my memoirs - Mixed Blessings from a Cambridge Union – comes from the fact that I was born in 1947 following an affair that my unmarried white mother had with a fellow student at Cambridge University,” she revealed while speaking at the Herstory Light Festival in Manchester this month.

“Imagine the scandal,” she added, “she couldn’t even bring herself to reveal that my father was Nigerian.”

She added: “It only became clear when my grandparents came to see me in the Mother and Baby Home run by Irish Catholic nuns. Handed down in family folklore were the words emitted by the nun before they saw me: 'To be sure the baby’s a little dark'.”

The Herstory Light Festival is a new movement calling on Irish women worldwide to ‘emerge from the shadows into the light’.

Professor Anionwu used her time on the stage at the Irish World Heritage Centre to explain how her background saw her develop a deep love of everything Irish. 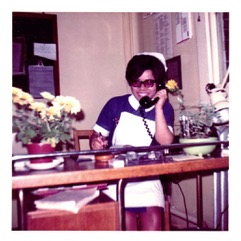 “I’m a 70-year-old retired black nurse of dual heritage who was born in England…with Irish links,” she said.

“My devoutly religious grandparents were born in Liverpool in 1896 of Irish emigrants who had arrived in the city in the 1870s. My grandfather’s Furlong family originated from County Wexford and Furlong was to be my surname until I was nearly 30.

“The first nine years of my life were spent in the care of Irish Catholic nuns in a Nazareth House convent.

“There were constant visits to the sick bay where a very caring nun cared for my severe eczema.

“I wanted to be like her and discovered she was a nurse. I also thoroughly enjoyed being taught Irish dancing.

“Then I lived with my mother and stepfather for 20 months.

“It was a dark period due to his physical abuse, but fortunately my grandparents rescued me.

“Irish culture was ever present in their household and I spent hours playing records and fell in love with the beautiful voice of Count John McCormack.”

She recalled further memories of her Irish household in Birmingham, including the obligatory St Patrick’s Day tradition.

“Another memory is of my grandmother anxiously awaiting the arrival of shamrock in time for March 17, and having a bunch pinned on my coat.

"Granddad was delighted with my love of Irish music and history," she added.

“I will never forget when we went for a walk and he explained the lyrics of The Wearing of the Green.”

And the time came when she would also get a change to embrace her Nigerian roots.

“At 25 I suddenly found my Nigerian father and later decided to take his surname of Anionwu,” she explains.

“I am proud of both my sides of heritage but of course when people first see me and hear my surname they will pick up no clues about my Irish roots.”

She concluded: “So imagine my immense shock and pleasure when the Irish World Heritage Centre in Manchester included me in their Herstory list of exceptional nurses from the Irish diaspora – thank you."

Mixed Blessings from a Cambridge Union by Elizabeth N Anionwu is available as an e-book and paperback at www.amazon.co.uk