In The Thick Of It Part 3: Working in a Michelin-starred restaurant

In the third of a four-part series, our roving reporter James Martin gets a taste of what it's like to work for a Michelin-starred restaurant at the Galvin brothers' La Chapelle eatery.

I wake up in a state of double delirium. Not only is this hours before I’d normally get up, but an incident involving a London tube strike, hordes of hysterical fans trying to leave a concert and sheets of non-stop rain means I only got to bed at 1am.

Sure, I’ve got home at 4.30am often, but I can’t remember leaving the house at such an hour.

While this is unfortunate for me, it’s surely suited for the authenticity of experience required for a day in the life of a sleep-starved young chef.

As well as delirious, I’m a little giddy on arrival at New Covent Garden Market, near Vauxhall, south London.

I’m about to spend the morning with the brothers behind the Galvin empire, a seven-strong restaurant business across London and in Edinburgh.

Two of the fine-dining restaurants – Galvin at Windows and Galvin La Chapelle (where I’ll be stationed for lunch service later) – have Michelin stars.

Since opening their first restaurant together in 2005, Chris and Jeff, whose father hails from Co. Cork, have come through the recession with strength.

They’ve also published an award-winning cook book, had TV appearances, launched a week-long festival of food and drink across their seven restaurants and still found time for many charity efforts. 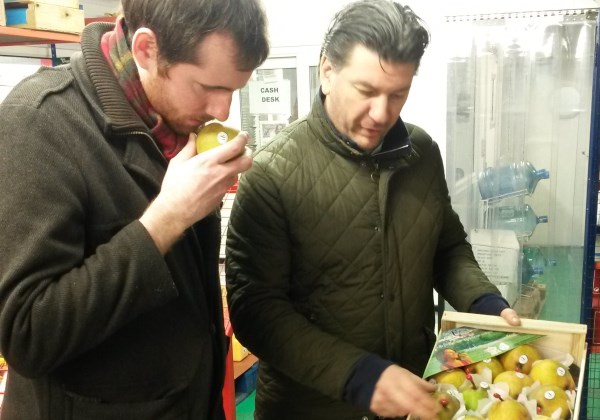 But back to the market. New Covent Garden claims to be the biggest wholesale fruit, vegetable and flower market in Britain.

I wouldn’t argue either. It’s military airport-hanger sized and inevitably, still shell-shocked by the night-time start, I’m completely lost among the bright buds of the Flower Market.

Not long after, I find my way outside and Jeff picks me up in his car to take us to the fruit and vegetable market.

The place is so big you need to drive between the different sections.

Jeff, the youngest of the Galvin brothers at 39, has slick black TV-chef hair with, it transpires throughout the course of the morning, a boundless enthusiasm for his profession.

I soon meet middle brother David Galvin, who is buyer for all five London restaurants.

David’s vampire-like shift hours means he’d normally be coming to an end in an hour’s time, at around 7am.

I’m led around and introduced to boxes full of the most fresh looking, smelling and tasting produce.

Brightly-lit and spacious, it’s the kind place Willie Wonka might go during lent.

The fruit and veg has come fresh off the boat during the night, from farming regions around France, shortly to make its way on to the plates of diners around the city. 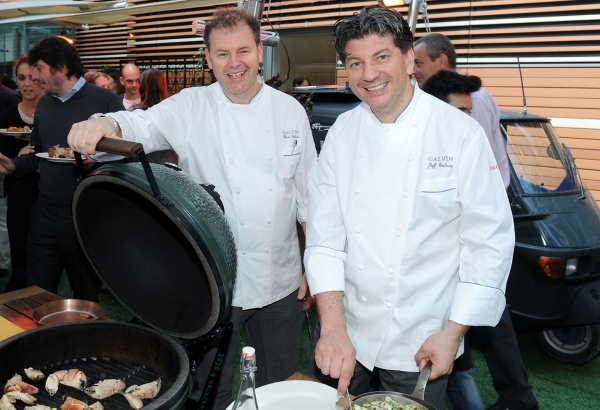 Many of the items are completely new to me and, as David points out over a batch of remarkably sweet-smelling lemons, the individual fruits are all different shapes and sizes; nothing like the uniform, GM-zapped, cloned fare you get in the supermarket.

Walking through the French Gardens I’m told that it’s normally pandemonium here, as buyers and customers jostle for position at the stalls, but I was too late for the main rush.

Shortly after, over coffee in Tony’s Café, a charming Only Fools and Horses style joint where hearty meals are ordered up throughout the night, Jeff says the place hasn’t changed an iota since the ‘70s.

However, the rest of the 57-acre market is downsizing soon.

No doubt in 25 years’ time it will be replaced by a massive Ocado outlet or other, and Tony’s caff will inevitably lose its character – if it stays open at all.

Feeling a bit saddened by such thoughts, as we leave for La Chapelle in Spitalfields in east London, a slight twinge of anxiety hits as I think about donning the apron.

Sharp readers may have noticed that I share the name with a certain celebrity chef who has a programme on Saturday mornings on the BBC.

It’s fair to say the similarities end there.

My culinary skills aren’t anything to write home about. And pretty much my only kitchen experience proper consists only of a two-year stint working part-time as a ‘catering assistant’ in British family restaurant chain The Harvester.

This, in pre-bullshit times, would have been known as ‘pot washer’, or as we called it, ‘washer-upper’.

As we’re driving back through traffic to the La Chapelle, Jeff tirelessly points out other fine dining spots and bars across the city.

He also talks about his partnerships with the Hilton Hotels and recounts his family’s business philosophies honed over the years (mainly to treat staff well in the hope they will want to stick around – sounds sensible enough, I think).

As he tells me how he made it to the top of the fine-dining food chain, I decide it’s best not to share my nugget about working in the Harvester.

My reasoning is it would be akin to boasting to a top pilot that you used to glue Airfix planes together and toss them off the side of slopes. 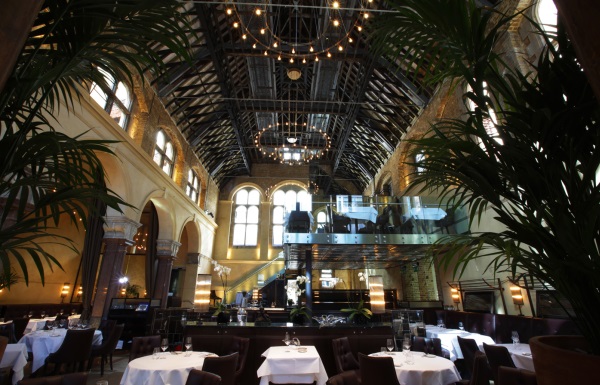 The restaurant is housed in a grade II listed building

We arrive at the history-steeped Spital Square, home to the Galvins’ La Chapelle  and the adjacent Café a Vin.

La Chapelle is situated in St. Botolph’s Hall, originally a free charity school founded in the early 18th century, while Café a Vin sits on the site of a former Curates House used by the parishioners of Bishopsgate.

La Chapelle’s main dining room – saved from demolition when Grade II listed building status was conferred following a sit-in protest from regulars at the Café in the ‘70s – retains the granite pillars, beams and gates which take visitors into the hall today.

As I’m led into  Café à Vin, the front-of-house staff are politeness personified and it seems genuine too. Not surprisingly the place is immaculate, yet has managed to retain a character of old.

I meet eldest brother Chris, who started out washing dishes for for Anthony Worral Thompson at small neighbourhood restaurant.

Chris recounts an amusing anecdote about how, during the first rumblings of the credit crunch, while La Chapelle was getting ready for its eventual opening in 2009, people were throwing bricks at the major RBS bank over the road. 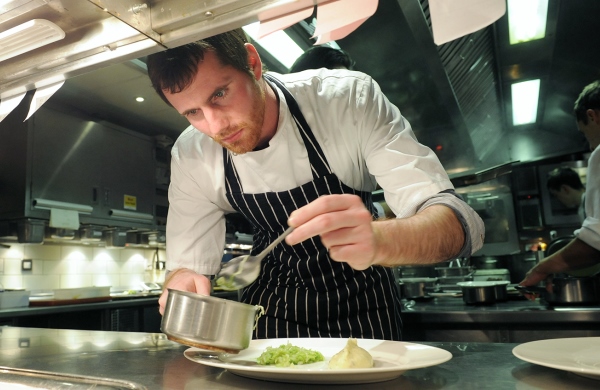 James plates up for lunch service

Meanwhile bread chef William Earl is just clocking off from baking fresh bread all night, having started at 11pm the night before.

I’m learning quickly that the high-end restaurant business is truly a round-the-clock operation.

Suddenly, I’m handed an apron and find myself in the main kitchen. Rich smells emanate from all corners of the baking-hot room.

Nine bodies, from sous chef to line cooks, dart busily in and out of one another.

In this heated environment, there’s little time for ‘excuse mes’ or ‘sorrys’. Living in London, this experience is bread and butter to me.

At one point, after Jeff produces a razor-sharp Japanese knife – his favourite cutting tool of choice - he asks what I’m like with the weapon.

For the second time today, I choose not to tell him about the Harvester.

I grab the knife confidently and we prep some radish, which so fresh you can almost feel traces of the earth from their time in the ground in France less than a day ago.

Then as patrons begin to arrive for lunch, I’m standing at the front of service. The chefs whizz around at electrifying pace now, as meals are dished up almost as quick as the little white order tickets appear.

Plating up for service is no lark either. The delicate-looking veg must be placed carefully making a bed for the main meat dish, which in this case is a Chateaubriand of Cumbrian beef, truffle pomme purée, sand carrots and caramelised shallot.

It looks delicious and I’m hit by a sudden pang of hunger and a feeling of exhaustion.

Jeff says it will be like this for the rest of lunch. It’s barely gone noon. This is supposed to be quiet day too because of the strikes.

Fortunately, I’m not on an 11-hour double shift. There’s no way I’d make it.

This year’s Galvin Festival of Food runs from May 19-25. For more information see www.galvinrestaurants.com/

See More: Galvin Restaurants, In The Thick Of It, Michelin Star