DENIS GILHOOLY, who has died aged 60, was a pioneer in global digital health.

In a career which spanned three decades in information and communications technology and health, Denis became an important global advocate for the critical role of digital health in the future of healthcare systems.

He had a passionate belief that data-driven innovation and investment could help bring health coverage for all through a redesign of health economics.

He also knew that trusted data was vital for the surveillance, preparation and detection of any future global pandemics.

Following his death Vint Cerf, vice president of Google, said: “Denis recognized very early on how powerful this technology could be. He connected at extremely high levels within UN organisations, ultimately becoming a key player in major initiatives to apply digital technology to health and well-being”.

Over the years Denis amassed a truly astonishing array of global contacts, drawn from the worlds of industry, politics, finance and academia.

He was a networker par excellence at the very highest level, and a skillful and accomplished organiser of, and rapporteur at, many seminal conferences and workshops addressing the planet’s digital future.

Part of his unique skill was that he knew how to tell a story, to get key messages across huge sector and country boundaries.

Among his many influential roles Denis was Vice President, Business Development at Teledesic LLC - the Broadband Internet-in-the-Sky venture of Bill Gates and Craig McCaw - and lead author of former Taoiseach Bertie Ahern’s two Advisory Committees on Telecommunications and ICT for the Irish Government. 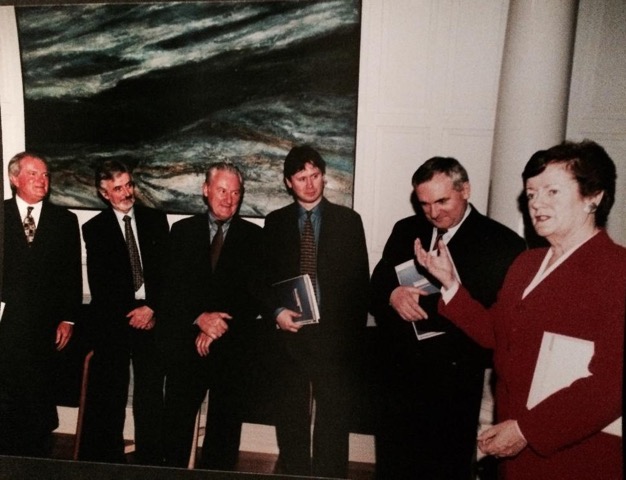 Born in Epsom Surrey, the middle child of Irish immigrant parents from Dromahair near Sligo, Denis’ parents worked in the mental health sector.

His mother Anne was a night nurse and father Jim a nursing assistant. He attended the Roman Catholic comprehensive St Andrews in Leatherhead, Surrey.

He was incredibly proud of his Irish roots and, like his parents, always described Ireland as ‘home’.

The first member of his family to go to university, Denis gained a BA Hons degree in English Literature and then a Masters Degree specialising in Shakespeare.

He retained a love of Shakespeare all his life and, to the delight of friends and colleagues, had a quote for every occasion. He was also renowned for his joyful company and humour.

He recounted with amusement that when he lived and worked in New York, going to the same bar regularly and becoming friendly with the bartender, the bartender was surprised to one day see Denis featuring in a news item regarding the UN on the bar’s TV, turning round to Denis to exclaim “Jeez Den….you gotta day job!”

At 24, Denis founded the publication Communications Week International before moving into and specialising in digital health.

He was however a visionary, being among the first to understand how digital health could provide early detection of epidemics, and through enhanced non-communicable disease prevention and control, to save lives and suffering.

Denis saw that digital health is critical to pandemic detection through its unique and inherent ability to keep pace with the nature of the pandemic.

“Denis was one of the architects of the UN Broadband Commission more than ten years ago with the goal of bringing broadband to the 3.5 billion people who do not have any access to the internet,” he said.

“He approached everything he did with enthusiasm and sought practical ways of solving global health and internet access problems. We will miss his wise counsel.”

Speaking of their shared commitment to the use of digital technology to do good in the world, Google’s Mr Cerf added: “I met Denis during his earlier editorial days at Communications Week International. We shared a love of Shakespeare but, perhaps more important, a persuasion that information and communication technologies had huge potential for good in the world.

"Though now gone from our midst, his light remains undiminished to guide us towards a benevolent digital future. I hope that we will be able to keep his work going, given its importance. He leaves a very big void.“

Friend and colleague Lord Mark Malloch-Brown has also paid tribute, stating: “Denis was always at the centre of things - whether at work or in a social setting. His spark was contagious and his enthusiasm for his work infectious.

“He was passionate about his mission of applying technology to development and public health and notched up great successes - a G7 process to embed it in development work was one that he worked with me on.”

He added: “He drew me and many others along with him. That sparkle in the eye as one sat with him,  whether it was as he spoke of technology or spun a humorous tall story or two, carried everyone with him.”

A citizen of the world, Denis travelled extensively all his life, although he always said Ireland was where his heart lay.

In this past year Denis had been based in China working on and helping to build the Digital Health Network with the World Health Organization alongside the GIO and TM Forum.

He died in Beijing just before Christmas after a short illness.

He leaves behind sisters Brenda and Marian and nieces Kathleen, Siobhan and Elizabeth. He is to be buried in Sligo.