A 97-year-old bachelor farmer who attended the Lisdoonvarna Matchmaking Festival for 72 years has passed away without finding his soul mate.

Mick Bourke from Co. Tipperary began attending the festival in 1946 when he was 23 years old and never missed a year until his health began to fade a few years ago.

His death, caused by pneumonia, was announced earlier this month.

“Mick was well known and loved by many in Lisdoonvarna and messages of sympathy have been pouring in all week to us, via social media,” a representative for the Lisdoonvarna Matchmaking Festival said this week.

“People are speaking of his warmth, his sense of fun and his razor-sharp dancing skills. He was a legend in Lisdoonvarna and he never gave up hope of finding love in over 70 years, attending,” they added. 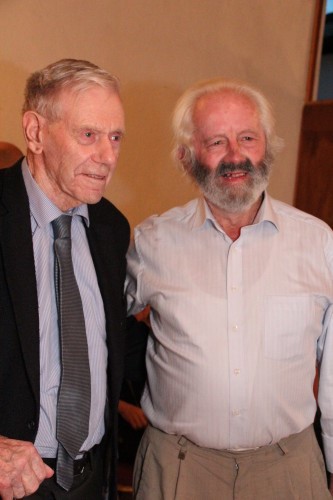 Back in 2016, a party was organised for Mick at the Spa Wells in the village, where he was presented with a cake by Lisdoonvarna matchmaker Willie Daly.

This event was attended by friends and regulars and marked his 70 years of continuous attendance at the festival – thought to be a record, by festival organisers.

“He never married, the problem was he too good looking, all the girls liked him and it wasn’t easy to choose one and leave the rest,” Mr Daly said.

His niece Catherine Bourke, who lives in the US, said that although he missed the last few years of his pilgrimage to the festival, they were “the happiest times of his life”.

“He loved dancing and would often go two to three times a week,” she added.

She told of how Mick had mentioned immediately falling in love with the atmosphere, the music, the dancing – and of course the women at the festival.

He told her: “After that I was hooked, and have been coming back every year since, still hopeful I will meet someone. I never married. I had a lot of lucky escapes.”

Mr Bourke explained: “I used to go home with a pocketful of phone numbers – this was my fodder for the winter.

“I had a few girlfriends over the years; once I was going out with a girl at home but I broke it off before I went to Lisdoonvarna – when I came back that was the end of that relationship.”

He added: “There would be lots of women from America back then, looking for a rich farmer. I had 200 acre sheep farm.

“Once I was dating a woman from Dublin and she came to visit me on the farm, it was particularly bad winter and we got snowed in for a few days. After the snow thawed she got straight on a train back to Dublin and that was the end of that. I think the remote location put a lot of women off.

“I always said that if I had met someone that would have been the end to my trips to Lisdoonvarna.”

This year saw the cancellation of the festival, for the first time in its 165-year history.

Marcus White, festival organiser, said: “What this year has brought home is how crucial social events like Lisdoonvarna are for people’s happiness and mental well-being especially for the older generation.

“It has been a tough year for everyone, but finally there is light at the end of the tunnel with the vaccine.

“Next year’s event will be going ahead and we have already booked musicians and DJ’s,” he concluded.

For more information and to keep up to date on the festival click here.