An Irish beach that was washed away in 1984 has reappeared over three decades later, much to the delight of local homeowners and holidaymakers.

The beach near Dooagh village on Achill Island, Co. Mayo vanished in the summer of 1984 when the strand was still popular as a beauty spot.

The area originally sustained four hotels and a number of guesthouses before the beach’s mysterious disappearance put an end to its status as a popular tourist spot.

But the glory days could be about to return after the ocean deposited hundreds of thousands of tons of sand onto the rocks at Dooagh over the past few weeks.

Beach migration is an integral part of the nature of shorelines, and an entire Cornish beach similarly reappeared in 2015 after it was washed away in a storm.

“The wind coming in from the north has been very strong recently and it must have transported eroded material in from elsewhere,” explained Sean Molloy of Achill Tourism.

A number of severe storms in 2014 and 2015 battered the area, destroying the benches and direct access down onto the beach.

Residents now hope that the sands will stick around long enough for the beach to be given blue-flag status by Mayo County Council when Achill Island’s beaches are inspected next year. 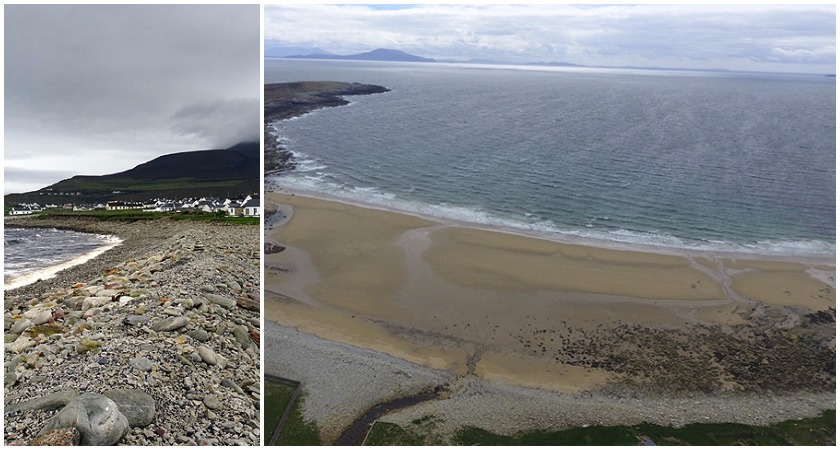 The beach as it was a month ago (left) compared to how it looks now. Picture: Sean Molloy

“The infrastructure isn’t there at the moment but if all goes well, hopefully Achill could have its sixth blue-flag beach in the near future,” Mr Molloy said.

The disappearance isn’t the first to affect Dooagh – the beach also vanished in the 1890s but had returned within three decades, when a pier was built in 1927. 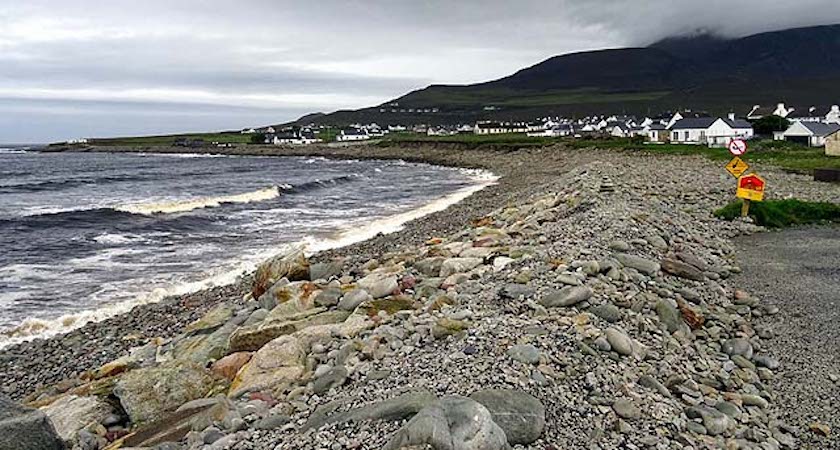 How the beach looked a month before the sand returned

Back then, a bugle would summon villagers to the beach when large amounts of wrack (seaweed) was washed ashore with the spring tides.

Dooagh resident Emmet Callagahn still has the original bugle, his great-great-grandfather Patrick Callaghan being the man whose job it was to sound the call.

“Back in those days Dooagh beach was the centre of the community, lots of businesses and guesthouses which are no longer there were sustained by it,” Mr Callaghan said.

“At the time Dooagh was one of the largest villages in Europe and it’s fantastic to see that the beach is finally back.

“Since it disappeared in 1984 the Atlantic Hotel, the Corrymore, the Wavecrest, and more recently the local shop have all gone. It’s a beautiful spot and hopefully this will help rejuvenate the community a little.”