A VIDEO PROJECT containing footage of a 'No Irish Pub' in the United States was conducted to expose many people's attitudes to immigrants.

As the St. Patrick's Day celebrations erupted over the weekend in cities all over Ireland, London and indeed across the globe, it seemed the whole world was Irish, if even for just the day.

Irish people are known for settling in places far from home and bear a strong link in communities around the world, proving a hard-working, lovable and reliable addition to many workforces and areas in dire need of some Irish charm.

Once upon a time however, the Irish were not so favourable in the eyes of the American state, with the saying 'no dogs no blacks no Irish' still a memorable phrase among the Irish diaspora.

Historically, in the US, the slogan ‘No Irish need apply’ – often referred to as ‘NINA’ – achieved similar infamy as a symbol of racist attitudes towards Irish immigrants. 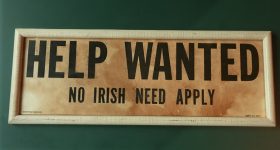 Nowadays, the Irish have a much better social reputation in American society however the attitudes many display to immigrants from other countries remain the same as the old stereotyping inflicted on Irish people of the past.

Atlas Industries set up a fictional No Irish Pub to show the old prejudices Irish people faced in moving to the States, and some of the challenges the immigrants of today face.

No Irish Pub from Atlas Industries on Vimeo.