I RECKON God is fine with homosexuality. It’s horse riding he has a problem with.

Pretty much everything in a horse’s nature tells you to stay away: their awesome strength, their untrusting eyes, the rounded bricks they call feet.

Hooves are so deadly that to receive a kick from one can send you hurtling through space and time. Hence the expression, “That horse is after kicking yer man into next week.”

It’s not that I don’t like horses, it’s that horses quite obviously don’t like us. And why would they? We are whipping them, breaking them, strapping goggles on them, platting their tails, pimping them out in horse brothels also known as stud farms, nailing shoes to their feet, eating them and shooting them rather than treating their broken limbs.

Like a lot of Irish people who grew up in the countryside, I was raised around horses. My father told me he was obsessed with them on sight. He left school at 13 for them, he emigrated to work with them, he devoted his life to them and they nearly broke him.

My father loved horses but he was abundantly aware of how lethal they were. One of my earliest memories is standing at a stable door while my Da told me to stand back further because this horse was “a real bitch” and likely to strike out at any time.

Even at the age of six it seemed an odd animal to be obsessed with given it’s propensity for violence. Like finding live electrical cables charming. It stayed with me. I’m scared of horses in the same way my wife is afraid of dogs.

I was never locked in a pen with a horse the way she was with a dog but almost every day of my childhood I saw how mental and unpredictable horses could be. 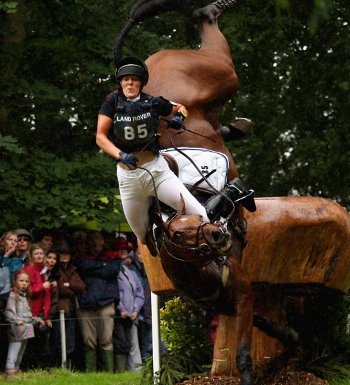 Maybe it is the danger that makes them so attractive. Cats are regarded by some as intolerably annoying, self-centered and vain until they reach a size where they can be considered deadly. Then all of a sudden everyone agrees that they are a majestic beast crowned the king of the jungle.

The fact that a man ever managed to tame a horse enough for it to allow him to ride around on its back waving to people is pretty incredible. The first person to do it must have been the David Blaine of his time.

It feels like the world’s fascination with the horse can be boiled down to the understanding that we shouldn’t be doing this. Tightrope walking, skydiving and base jumping make no sense on paper. That’s half the reason why we do them.

Horse riding in even its most cushy form (pony trekking) is like dating a villain’s girlfriend in a Bond movie. It’s exhilarating when it’s happening but in your heart you know it’s going to end badly and more than likely you won’t be able to walk afterwards.

Forward thinking people recognised this and resolved to work day and night to come up with a mode of transport that was less life threatening than sitting on the back of a four-legged-arsehole / horse.

The carriage was a start. It needed to be attached to the horse so it seemed like a decent compromise to most. For others it was not enough. The bicycle was proof that people would rather do something more strenuous than walking than have to interact with a horse. But there was no protection.

On a bike you still had to deal with all manner of horse shit both figurative and literal. The car was the solution. An enclosed room on wheels not big enough for a horse to fit inside. As soon as we made a car fast enough to out-run a horse we coined the term “horse-power” just to rub it in their stupid long faces.

Look, I lost a lot of money on Cheltenham last week so perhaps my opinion is a little bit biased. But still we should all be thankful for what we’ve got.

The next time you find yourself cursing out traffic or airport security, remind yourself, “At least I’m not on a horse.”

Because no matter how bad the journey, how long the lines, no Ryanair flight has ever attempted to kick me in the face or bucked me off and taken off into the distance.