As producers and hosts of The Irish in the UK TV show, they will celebrate their magnificent milestone with a number of celebrities taking part in their anniversary special.

It was revealed to The Irish Post this week that the 200th episode, which will be broadcast live at 7.30pm on Thursday, March 25, will feature a message of congratulations on their achievement by the President of Ireland Michael D Higgins.

Along with the video message from Uachtarán na hÉireann, there will be appearances from recording stars Daniel O’Donnell and Nathan Carter.

Over the past four years Martin and Annette have travelled the length and breadth of Britain to produce their weekly show, which airs every Thursday at 7.30pm on SKY Channel 191 and via their website www.theirishintheuktv.com.

They have continued that work throughout the pandemic, allowing their viewers to keep connected with Irish organisations across the country even while in lockdown. 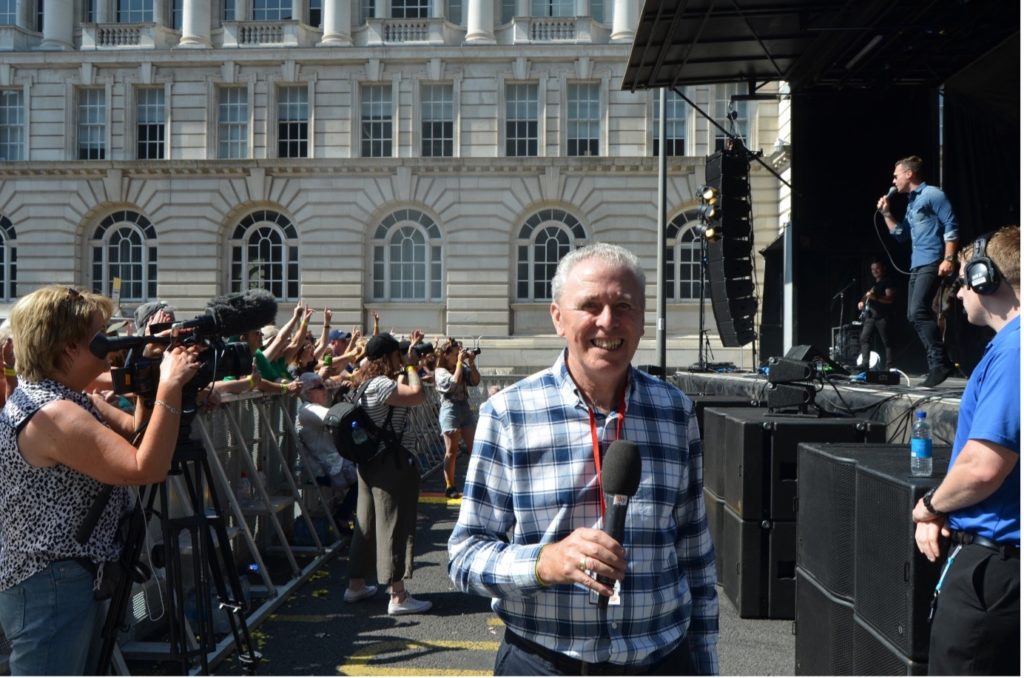 Martin Logan in action for Irish in the UK TV (Pic: Gerry Molumby)

Their programme, which is repeated on Tuesdays at 1pm, is well received across Britain and viewed throughout Ireland also – with a major aim of the programme makers to “keep a connection with Ireland”.

“The purpose of the show is to highlight the Irish Community in the UK and the incredible success of so many Irish people who have made their home here,” Mr Logan told The Irish Post.

“Our aim was always to promote Irish dancing, music, song, sport and a good personal story, whether it’s from up-and-coming young talent living in the UK or those who have served their community over a long time”.

He ran a family business for 35 years, employing many members of the Irish community around the north of England, before getting involved in radio by providing the GAA sports results with BBC GMR Radio Manchester.

As well as recording his weekly TV show, Mr Logan continues to present his own radio show with wife Annette on All Fm 96.9fm.

Mrs Logan, who hails from Ballina in Co. Mayo, does the filming and some of the editing for the television show, which then goes to Sky TV here in UK to be formally edited for broadcast.

Since the show first launched in May 2017, the Logans have been on a mission to promote the best of the Irish in Britain.

The weekly broadcasts are supported by sponsorship from Euro Gold Civil Engineering Construction LTD, the L’olivetto Restaurant in Liverpool, and, for this year, the Irish Government’s Emigrant Support Programme.

To continue into the future and beyond Covid-19, The Irish in the UK TV show has to find more sources of funding.

For further information about the show or how you can support it email [email protected].