IN 1900, thousands of Irish people lined the streets of Dublin to greet Britain’s Queen Victoria on her state visit to the country.

Ireland were just 16 years away from the Easter Rising that would eventually lead to Irish independence and the Queen's visit was met with both joy and protest.

Despite some reservations about the British sovereign's visit to Ireland, an astonishing 52,000 turned up to welcome her to Phoenix Park.

As she made her way around the country, she was warmly received by many and soon there were whispers of constructing a statue of Queen Victoria.

Her death nine months later at the age of 81 led to huge support for a memorial to be designed – and plans took off in earnest.

Some eight years later, crowds gathered outside Leinster House – the home of the Irish Government – to watch the statue being unveiled.

The designer, Irishman John Hughes, made a conscious effort to portray Victoria as the Queen of Ireland as opposed to the British monarch. 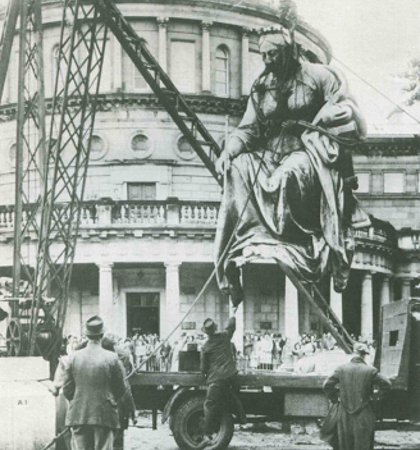 Queen Victoria being removed from Leinster House. Picture: Come Here To Me blog

Perched high on a stone column flanked by figures of Ireland was a fifteen-foot bronze statue of the Queen.

The base of the statue read; “Victoria, Queen of the United Kingdom of Great Britain and Ireland, Empress of India, erected by her Irish subjects”.

There the statue stood proudly – but not for long.

Ireland’s struggle for independence from Britain did not happen overnight – but by the 1940s, the Irish Free State had been replaced by the Irish Republic.

As the new government gazed out on the sprawling lawns at Leinster House it soon became apparent that the Queen’s presence was no longer appropriate.

At first, she was offered to her native Britain but the House of Commons politely refused the statue, for unknown reasons.

A second bid to ship the Queen away from Ireland was made later when the town of London in Canada agreed to take her – but neither the Irish or Canadian governments were willing to pay shipping costs.

Queen Victoria, once proudly placed in front of one of the most important buildings in Ireland, was removed from Leinster House in 1939.

Her new, decidedly less glamorous home was in storage in the grounds of Kilmainham hospital.

But when the hospital began to expand, the Queen’s statue was once again moved – ending up in the abandoned grounds of a former reformatory in the small town of Daingean, Co. Offaly fromm 1980.

Here, Queen Victoria's image would lie until the 1986 when she was finally dusted off and carefully carried on to a boat.

She arrived in Sydney, Australia and underwent some restorative work and plans were made to install her in her new home.

On December 20, 1987, Victoria was unveiled on a new plinth outside of the city’s Queen Victoria Building, some 48 years after she was last on public display.

This piece of Irish history may be half way across the world now – but then-Taoiseach Garrett Fitzgerald ensured that should Ireland ever decide to take back the statue, we can.

Queen Victoria’s sculpture is still the property of Ireland – but on loan to Australia.

And now, some 107 years after she was first unveiled in Dublin, Queen Victoria sits in her full glory outside of one of the most recognisable buildings in Australia. 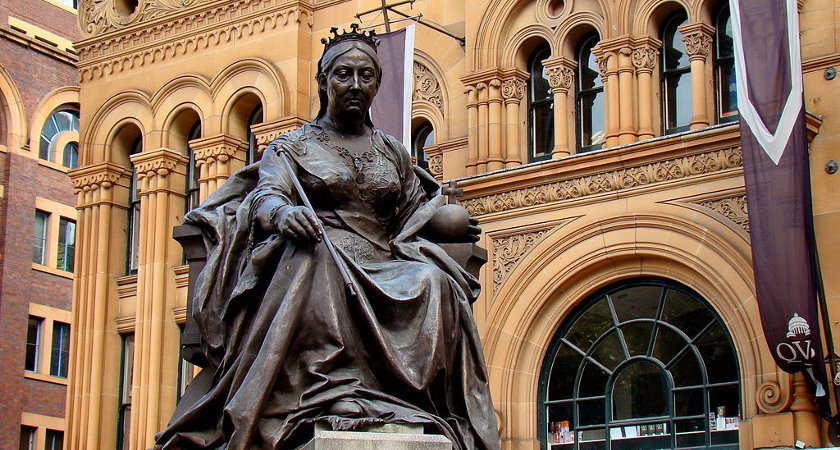 The Queen Victoria statue at her current home. Picture: Wikicommons