TO put my appreciation of the illustrations and more especially the stained-glass art of Harry Clarke into context, I need to tell you he died at the age of 41, in Chur, Switzerland.

He had been attempting to return to Ireland but became seriously ill with tuberculosis.

Yet in his short life he has left us so many colourful illustrations on books like The Fairy Tales of Hans Christian Andersen, but it is as the designer of stained glass that his legacy is largely appreciated.

What a way to be remembered? That as the sun rises daily so many people will return to or see for the first time his contribution to art nouveau and the arts and crafts movement.

He had left his company in a healthy condition with a significant number of orders on the books, a good manager in charge, an excellent reputation for the work produced by the studios in his idiosyncratic style and, very importantly, his name on the business.

Family connection was maintained by Terence Clarke, son of Walter Clarke and nephew of Harry leading the creativity.

It is interesting that Clarke and his brother, Walter, were both born on March 17, although a year apart.

Both worked in the family’s stained glass business and they married sisters Margaret and Minnie Crilley, from Louth.

The brothers later died within six months of one another.

So far reaching was his stained glass work that from Bewley’s Café in Grafton Street, or The Eve of St. Agnes in Hugh Lane Museum, to numerous churches throughout Ireland (my favourite being St. Brigid, Ballinrobe, Co. Mayo), England, USA, and Australia you can still visit an original signed Harry Clarke window, or a window designed by Harry Clarke Studios, with that distinctive format. 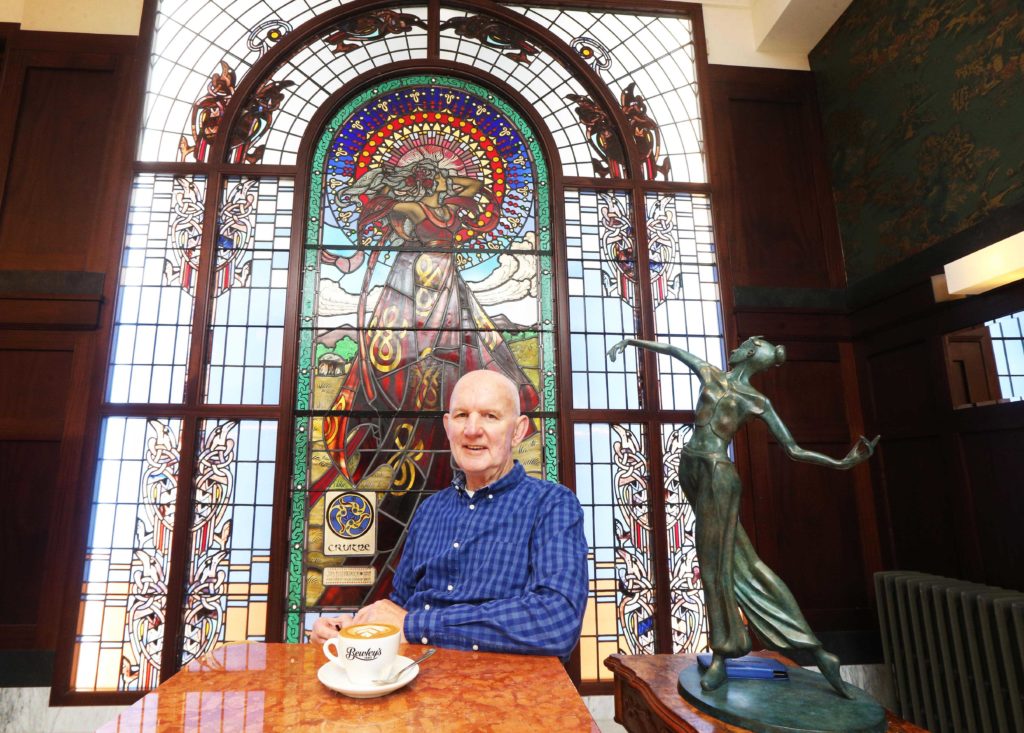 Paddy Campbell of Bewley’s, pictured in their Grafton Street cafe, sits in front of its Harry Clarke window

The company continued up to 1973 and there are 130 such windows worldwide, but mainly in Ireland.

Harry and the company’s format are distinguished by the finesse of its drawings, the expressive eyes of those portrayed and the use of rich colours, especially reds and blues.

In my opinion Harry Clarke is master of the green also, he captures in his windows what Johnny Cash called later ‘The Forty Shades of Green’.

Hs father Joshua Clarke (1858 – 1921) came to Dublin from Leeds in 1877 and worked as a sales representative for an ecclesiastical supplier, which was a booming business then in Catholic emancipated Ireland.

In 1886 he set up his own church decorating business at 33 North Frederick Street.

Joshua Clarke was an entrepreneur, always looking for new opportunities to improve his business and in 1892 he added stained glass window provision as a service.

Later, when Harry was in his late teens he would study stained glass at the Dublin Metropolitan School of Art.

In 1911 he won a gold medal from the Board of Education National Competition at South Kensington, London for his window the Consecration of St. Mel, Bishop of Longford, by St. Patrick. 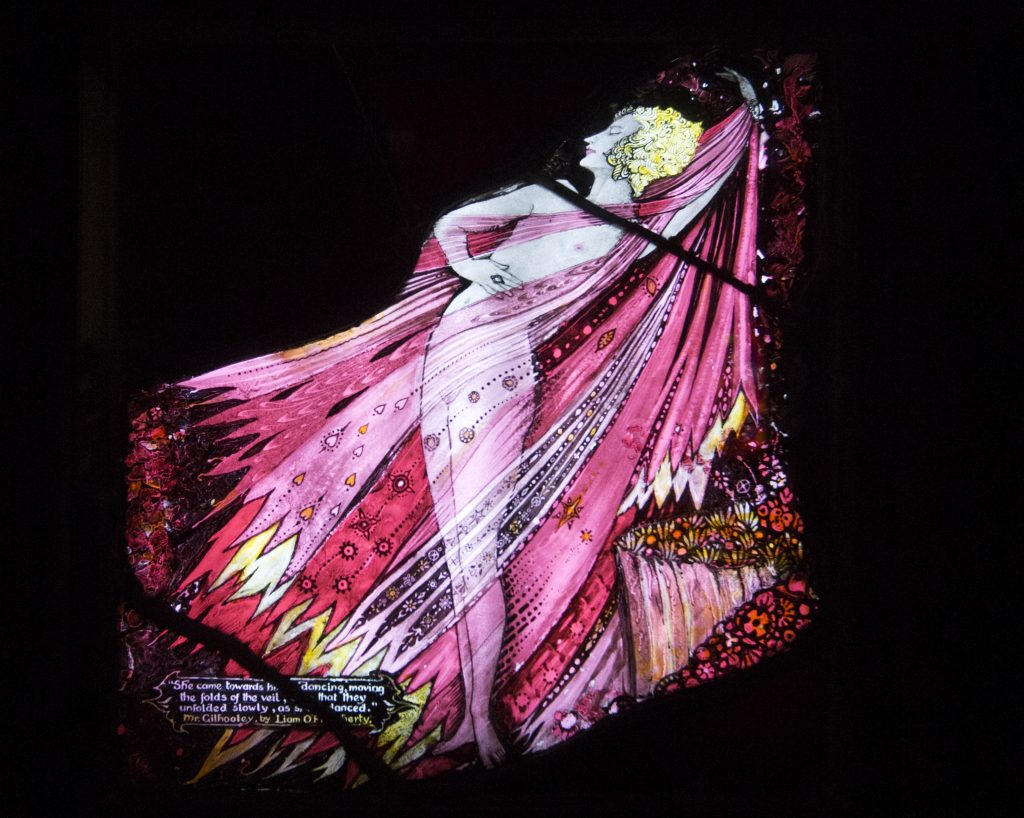 This glass can be viewed at the Crawford Art Gallery, Cork.

At the Dublin Metropolitan school of art Harry met Margaret Crilly, a fellow artist and teacher.

To the surprise of many the pair married on October 31, 1914 and moved into a flat at 33 North Frederick Street.

They subsequently had three children, Michael, David and Ann.

Harry was in his prime at this stage, in what were the years of the literary and dramatic movement known as the Irish (or Celtic) Revival.

He joined the ranks of greats like W B Yates, J M Synge and Seán O'Casey, his best friend being Lennox Robinson who was the spearhead in the foundation of the national Abbey Theatre.

Harry’s audacious designs placed saints and angels next to sexual and macabre imagery giving his work a uniquely strange and otherworldly feel.

His greatest masterpiece of all however, was the Geneva Window, an eight paneled stained-glass celebration of Ireland's greatest modern writers.

The backstory to that is that at the time it proved a little too exotic for the conservative tastes of the Irish State and the Catholic Church.

However, the director of Ireland's National Gallery, Thomas Bodkin, said that it was quite simply "the loveliest thing ever made by an Irishman".

And having researched its provenance, I totally agree.

But you will need to fly to Miami to view it.

The bulk of Clarke's work is to be found in Ireland, but a few significant pieces can be seen at the following places:

Lancashire: St Oswald & St Edmund, Ashton in Makerfield; 7 windows (each of one light) from 1930,