A RARE shark tooth from the mouth of a shark that lived over 300 million years ago has been discovered on the coastline of Co. Clare.

The fossil was discovered by Dr. Eamon Doyle of the Burren & Cliffs of Moher UNESCO Global Geopark, near to the picturesque coastal village Doolin.

The tooth belonged to a beast that prowled the waters off Ireland during the Carboniferous period – around 320 million years ago.

Back then, the part of Earth that is now Ireland was basking in the tropical weather of the equator.

Dr Doyle said that the fossil was from a predator which probably measured around 70 cm in length. 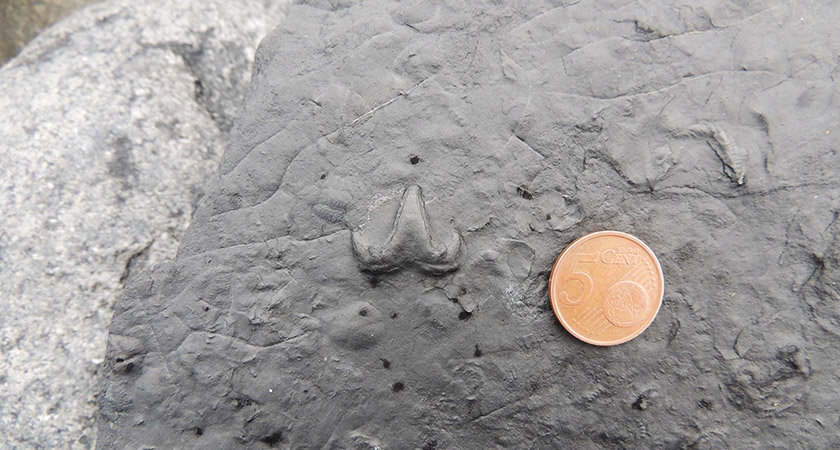 The tooth belonged to a shark that lived during the Carboniferous period. Picture: Arthur Ellis

“Fossil sharks teeth of this age are very rare in Ireland and so it extends the known range of fossil sharks in Ireland,” said Dr Doyle.

“Equally significant is the information it gives us about the biodiversity of these ancient seas. This shark tooth tells us that apex predators of up to 70 cm were living here at the time.

“It is possible they were feeding on creatures known as nautiloids which are spiral-shelled creatures which grew to about 10cm where the tooth was found.

“These nautiloids were also predators and prior to this find would have been regarded as the apex predator. It is hoped that further finds will add more information,” he added.

The public will get a chance to see the fascinating fossil when it is put on public display on May 25 at an event at the Burren Rocks Festival.