TRAILBLAZER: Meet the remarkable yet little-known Irishman who designed and built the White house

THE WHITE HOUSE is one of the most recognisable landmarks in the world - yet few know the name or story of the Irish man responsible for its design and construction.

James Hoban, who was born in 1755, spent his childhood years in Desart, Cuffesgrange, county Kilkenny.

His father was a tenant farmer on the estate of the Cuffee family at Desart Court, a grand Palladian country house dating from 1733.

It was in the estate workshops at Desart Court that Hoban trained as a carpenter and wheelwright, until his move to Dublin as a teenager, where he studied at the renowned Dublin Society Drawing School during a time of great expansion for the city.

And it was his training at that school which gave him the skills to practice as an architect and opened doors to an influential circle of developers, architects, and craftsmen who helped consolidate his architectural training before he left for America. 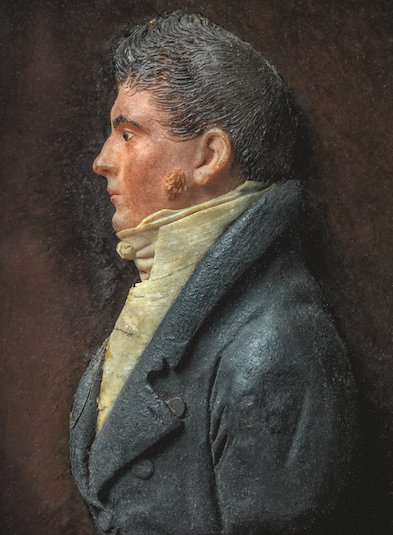 This month a fascinating new book, JAMES HOBAN: Designer and Builder of the White House reveals who this elusive man was, what informed his craft, and the mark he left on the US.

Edited by Stewart D McLaurin, the anthology is designed to take the reader from Hoban’s roots in Ireland all the way to his work on the White House – including the fact that his design for the impressive building was inspired by none other than Leinster House in Dublin.

Mr McLaurin is President of the White House Historical Association.

To ensure readers get the full story on Hoban, he brought the world’s most knowledgeable scholars on the Irish architect together to present the tale of his life, influences and work.

Regarding how Hoban found himself in the direct employment of the first US president, McLaurin explains: “The famous meeting that ultimately gave America its White House happened in 1791, in Charleston, South Carolina, when George Washington happened to be introduced to a young “practical builder” from Ireland."

“Washington was impressed by the builder but soon forgot his name,” he added.

“When considering the design of the President’s House, yet to be built in the emerging Federal City of Washington, the president asked after the young builder.” 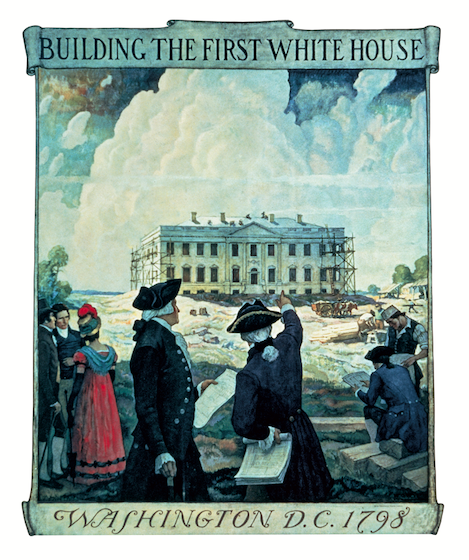 An artist's impression of George Washington and James Hoban looking on as the White House takes shape (Pic: The White House Historical Association)

By 1792 Hoban was at work on the building site, having won a public competition for the design of the President’s House, which was to be a mansion for the US president to reside in.

That was the vision of Washington, who on April 30, 1789 had taken his oath of office as the first President of the United States.

Once Hoban had won the contract to make his dream a reality, Washington placed him in charge of the entire project, with all departments of building – carpentry, stonemasonry and brickwork – under his supervision.

“The resulting structure, accomplished in time for President John Adams to take residence in November 1800, fulfilled Washington’s vision and is today one of the most recognisable landmarks in the world,” Mr McLaurin explains.

“Although Washington would never live in the house, he drove the stakes for the foundation himself and visited the building site as the walls rose.”

Hoban remained involved with the ongoing project that was the White House for the rest of his life, with his final contribution being the North Portico, an addition to the original building that he planned with the American architect Charles Bullfinch.

“Hoban oversaw the beginning of its construction in 1829”, Mr McLaurin explains, and “the project remained in progress when Hoban died in December 1831”. 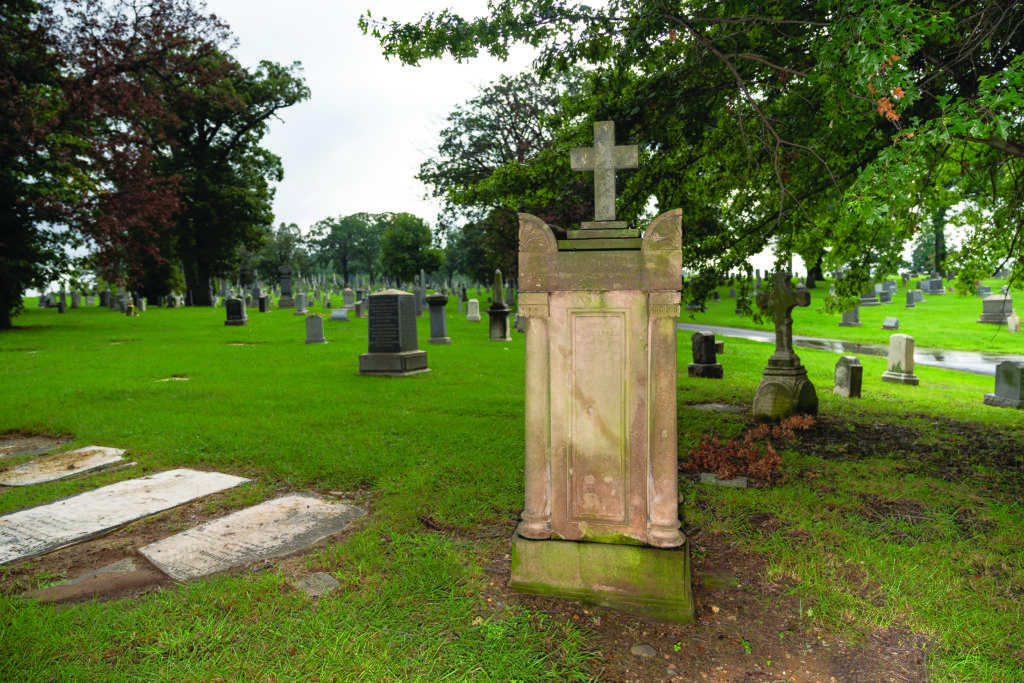 The tall sandstone monument that marks the plot is inscribed with the names of Hoban, his wife, several of their ten children, and many descendant and spouses.

Following his death, the White House went on to become one of the most famous buildings in the world.

Yet its creator slipped into obscurity.

“Only one portrait [is] known to have been made during his life and, with that being a silhouette, we only see half of his face.”

He added: “His first design concept for the exterior of the President’s House has been lost and his papers burned in a house fire after his death.

“With this anthology the world’s most knowledgeable scholars on James Hoban introduce us to him, presenting the story of his life, influences, and work.” 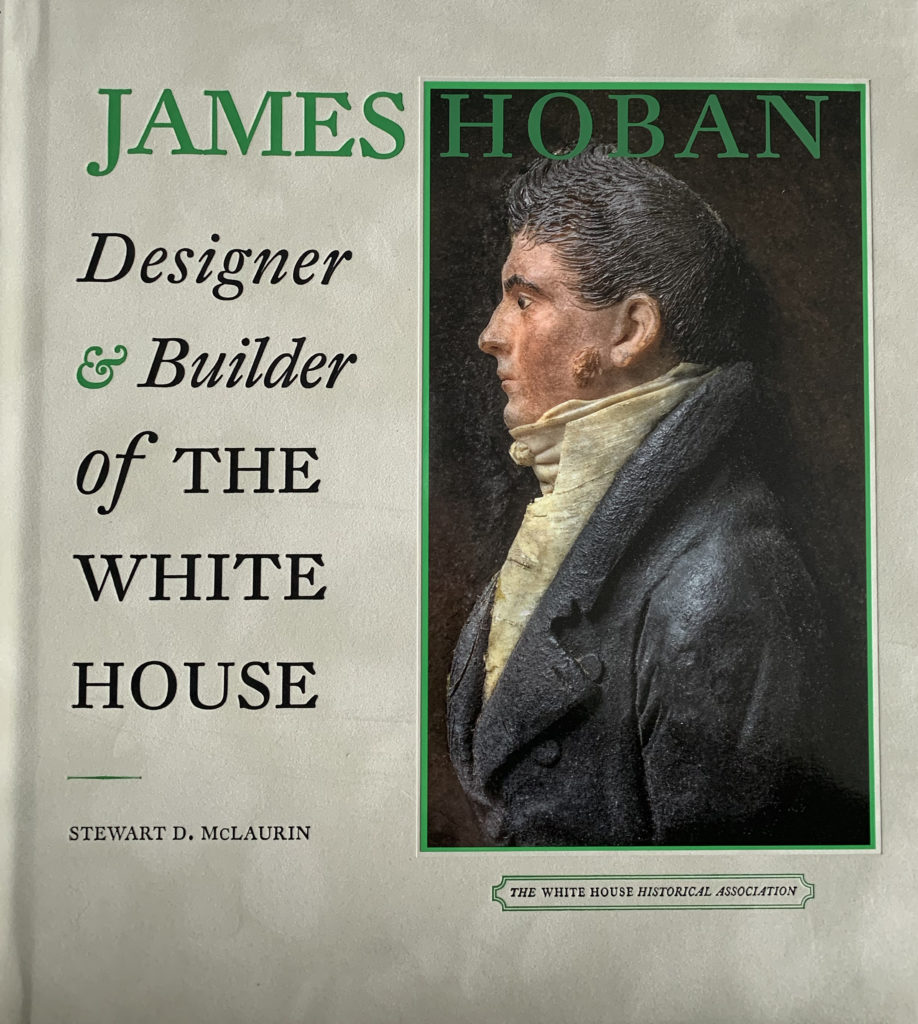 In JAMES HOBAN: Designer and Builder of the White House, which was released on St Patrick’s Day, March 17, 2021, readers can immerse themselves an authoritative account of the life and works of one of the most successful emigrants to come out of Ireland.

For further information or to purchase the book click here.