Manchester Irish festival stew will be free to customers in a taste of all things Irish. The Horseshoe, Levenshulme. Starts 8pm, free.

King Puck – A Celebration of the Music of Christy Moore, Planxty and The Moving Hearts

A celebration of the music of Christy Moore, Planxty and The Moving Hearts. M19 Bar & Venue, Levenshulme. Starts 7.30pm. £5

An evening of words, song and dance celebrating the ability of the Irish people to embrace change.
Irish World Heritage Centre. Starts 8pm. £3

Represent your County in this All Ireland Darts competition against the Union Inn's Mayo team.
The Union Inn, Levenshulme. Starts 8pm, free.

Warm up those vocal chords at this singing contest. Cash prizes are up for grabs.
Farmers Arms, Burnage. Starts 8pm, free admission.

The Irish in Manchester Guided Walk

At Chorlton Irish Club. 11am.

Reel Rhythms and Shake the Barley

Start the celebrations early and start them in The Horseshoe.
The Horseshoe, Levenshulme. 8pm. Free. 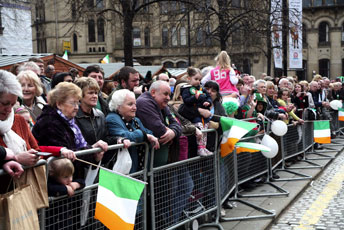 Crowds line the streets of Manchester.

The choir will lead the singing of a series of Irish songs.
Albert Square, Manchester. 12 noon – 1.30pm. Free.

St Patrick’s Mass in Gaelic will set you up for the parade.
Irish World Heritage Centre. Starts 10am.

Rock up for a full day of live sport and craic with the GAA All Ireland Club Finals being shown live on the Big Screens from 1pm.
Hennigans Sports Bar, Levenshulme. Free.

The Script at Manchester Arena

The Dublin Legends – formerly The Dubliners