THIS YEAR marks the thirtieth anniversary of the death of James Joseph Magennis, the only Northern Irish recipient of the Victoria Cross in World War II.

The Victoria Cross is the highest possible military honour for valour in the face of the enemy, awarded to members of the British armed forces.

After the war Magennis returned home to a divided city. Despite becoming something of a local celebrity, he was derided by republicans who saw his achievements as betrayal and overlooked by Belfast City council who were hesitant to celebrate a working class roman catholic.

1. He was born James McGinnes on 27 October 1919 at Majorca Street, West Belfast as a child he attended St Finian's Primary School on the Falls Road

2. He enlisted in the Royal Navy in 1935, aged just sixteen, he signed up spelling his name Magennis

3. In December 1941, Magennis was serving on the destroyer when it struck a mine off the cost of Tripoli, Libya. The crew were evacuated and the ship was  intentionally sunk to prevent its capture by the enemy

4. In 1942, he joined the submarine branch and trained as a diver. In September 1943 he took part in Operation Source, disabling the German battleship Tirpitz

5. In July 1945, Magennis joined Operation Struggle serving under Lieutenant Ian Fraser. They were tasked with sinking the 10,000 ton Japanese cruiser Takao. The ship was located near the coast Singapore providing anti-aircraft bombardment. The Role of Magennis was to attach limpet mines to the bottom of the cruiser, a difficult and dangerous job working with explosives, under the water

6. Despite a myriad of problems including a leaking oxygen tank, Magennis was required to go into the water with the explosives not once, but twice. It was this nerve-wracking work that earned him his Victoria Cross 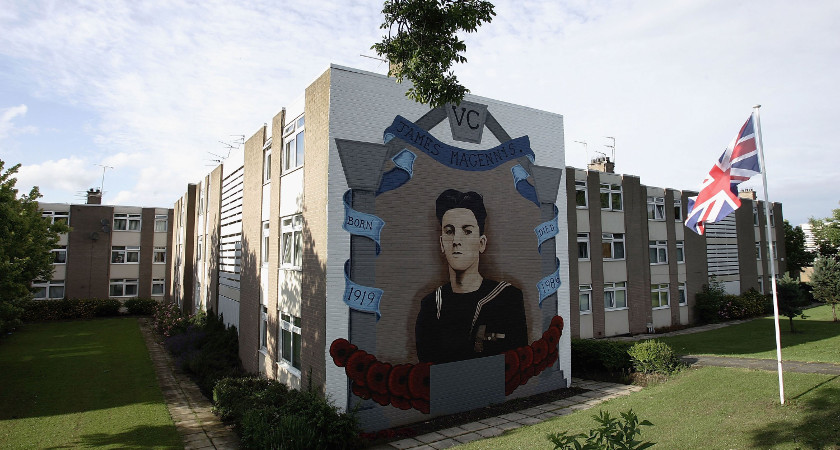 The James Magennis mural in Belfast

7. In 1949, he left the Navy and returned to Belfast. The people of the city raised more than £3,000 as part of a shilling fund for him, however he fell on hard times and sold his Victoria Cross

8. In 1955, he moved to Yorkshire where he worked as an electrician. In the last years of his life, he suffered from ongoing health problems, he eventually died on February, 11, 1986 of lung cancer

9. Memorials to him can be found on both the inner wall of Bradford Cathedral, where his memorial service was held and on the wall of his former home on Carncaver Road, East Belfast. A blue memorial plaque bearing his name is attached to the front of the Royal Naval Association building on Great Victoria Street, Belfast

10. Megennis’ Victoria Cross was purchased in 1986 by Lord Ashcroft for £29,000, it can now be seen in the Imperial War Museum’s Lord Ashcroft Gallery in London

Taoiseach to meet with political leaders in Belfast today