A YOUNG Irish dancer has been left “heartbroken” after her £700 dress was stolen just weeks before the World Championships.

Police are investigating the theft of Mairead Skirka’s costume from a Glasgow train as she travelled to the All-Scotland Championships on Saturday.

The incident left the 17-year-old in floods of tears and meant her team had to pull out of the annual event.

“Mairead was devastated,” her mum Rosaline told The Irish Post.

“She felt like she had let everyone down because it was her team dress that was taken, so the girls couldn’t take part.”

With no luck in her attempts to track down the dress since Saturday, Mairead is now fearing the worst – that her team will have to pull out of the World Championships in London this April.

It is the first time the eight-strong troupe from Glasgow’s Osborne Academy is due to compete in the worldwide competition and they have already spent more than £1,000 each on costumes, travel and accommodation.

“I don’t understand why somebody would do this,” said Mrs Skirka, who has roots in Co. Mayo.

“What good is my daughter’s dress to anybody? They are not going to be able to resell it, especially because it is a team dress and people will be able to recognise it.”

She added: “It just seems like such a mean thing to do, to steal something like that that means so much to a bunch of young girls. 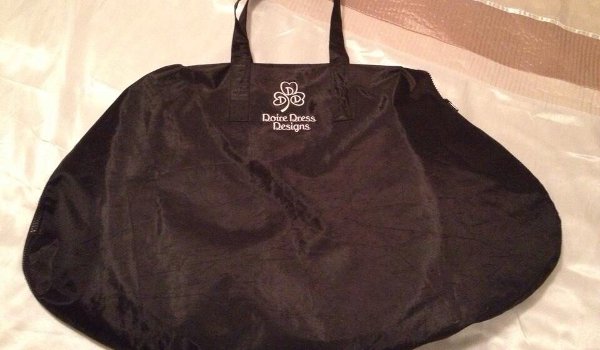 The bag containing the dress that disappeared from the train

“They have worked so hard over the years, putting in all the hours with the dancing and the fitness and the rest of it, but this just makes it feel like it was all for nothing.”

Mairead was travelling with her mum when her dress was stolen.

The pair got off the train at Glasgow Central station only to realise they had forgotten the costume in its distinctive bag on a luggage rack.

But when station staff called ahead to have the train checked at the next station, they discovered the bag had vanished.

British Transport Police confirmed they are investigating the incident and will be checking CCTV from the train and stations through which it passed.

Mrs Skirka said there were “a lot of upset girls and very upset mums” when her daughter told the rest of the Osborne Academy team about what had happened.

They were all gathered in Glasgow’s Royal Concert Hall at the time, having their make-up applied and preparing for their All-Scotland Championship performance.

But she paid tribute to their attitude since the theft, saying: “Everyone has been so supportive, telling Mairead they will all get over this as a team and appeal to get the dress back.”

If their appeal does not lead to the return of Mairead’s costume before the World Championships on April 13, Mrs Skirka said her family still intend to go to the event.

“But it would be heartbreaking to be sitting there watching, thinking ‘you could have been up there’,” she added.