AN IRISH publican and his brother are living in fear of vicious thugs who remain at large after a Valentine’s night attack.

Declan Duggan, 57, was left needing reconstructive surgery and stitches to his head after two men kicked him around “like a rag doll” at his brother’s pub in Luton.

His brother, Gerard, 58, was also assaulted for refusing to serve alcohol to the pair, who later smashed the pub to pieces using an axe.

The Duggan brothers have told investigating officers where they believe their well-known local attackers live, but police have yet to make any arrests.

“We are still terrified there will be a reoccurrence of this attack,” Declan Duggan told The Irish Post.

“But we have been hung out to dry because we are getting no communication from the police force whatsoever, which is creating real anxiety and making everything 10 times worse.”

The Duggan brothers, both born in Dublin, believe their attackers are the same men who threatened them on St Stephen’s Day last December.

On that occasion two men warned ‘we will be back’ after being asked to leave Gerard’s Sugar Loaf pub because it was closed to the public on bank holidays.

This time around the Duggans were relaxing at the venue with friends in the early hours of Saturday, February 15, when the men entered in a group.

After being told they could not be served because the bar was closed, Gerard Duggan claims one of the men quickly grew aggressive and headbutted him.

As the brothers tried to force the troublemakers out of the pub, Declan was struck on the head and fell to the ground outside, where he was set upon by the men. 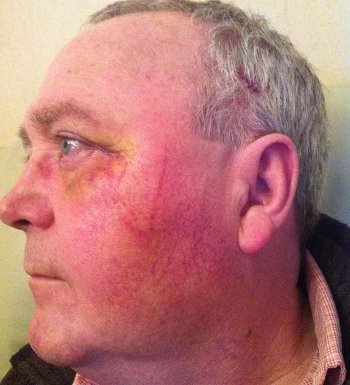 “One of them kicked him straight in the face while the other punched him,” Gerard said. “There were several hard kicks and they got them in very quickly, so the damage was already done by the time we got him back inside.”

The gang of men then fled. But within 10 minutes they had returned with weapons, including a fireman’s axe and a garden shovel, and began destroying the pub’s windows in an attempt to force their way back inside.

“For those of us who were left inside it was an absolutely terrifying ordeal, because we did not know how many people were outside with axes and hatchets,” said Declan, who used to run the White Swan in Dunstable.

The former landlord, whose jaw had to be surgically reconstructed because of the severity of the attack, added: “I was a publican for 25 years and I had to deal with a number of incidents over that time. But I have never seen or heard of an attack on a community pub like that.”

But he explained that most of his anger is directed at Bedfordshire Police, which he believes are failing to investigate the incident properly.

“We have also given their address to the police, but at the moment they have chosen to do nothing about this, which is the most frustrating and frightening thing,” Declan said.

“These people are walking around with impunity. The shock of the attack was bad enough, but the inactivity of the police now is exasperating things because nobody knows where they stand.

"I have never been contacted by the police since the incident, when I gave my statement at the hospital.”

A Bedfordshire Police spokesperson confirmed it is investigating the assault and the damage to the Sugar Loaf, which it believes were carried out by the same people.

She added that police had spoken with the victims “on a number of occasions”.

One of the men wanted by police is described as white Irish, in his early/mid-30s, of medium-stocky build, 6ft tall and with short dark black hair.

The other is described as white British, in his early/mid-30s, 5’7’’ tall, of medium-stocky build and short dark hair, possibly brown, gingery hair and a goatee.

Anyone with information about the incident is asked to call investigating officer PC Paul Element on 01582 473 401.