12 August 2021; Will Hanley of Ireland in action against Ygor Biordi of San Marino during the FIBA Mens European Championship for Small Countries day three match between Ireland and San Marino at National Basketball Arena in Tallaght, Dublin. Photo by Eóin Noonan/Sportsfile

Ireland won against San Marino by 107 to 59 in FIBA European Championship for Small Countries.

Ireland made it two wins from two in the FIBA European Championship for Small Countries, with a comfortable 107-59 victory over San Marino at the National Basketball Arena. Will Hanley scored 15 points in the win, as did Sean Flood, who also had three assists and three steals.

It was a strong start from Ireland, John Carroll signalled the team’s intent with a little over three minutes gone with a dunk for a 8-0 lead.

The opening quarter saw CJ Fulton and Jason Killeen register their first points of the tournament. Will Hanley had his eye in, a three pointer in the final 30 seconds brought his first quarter tally to 10. A buzzer beater layup from Ciaran Roe made it 34-9 at the end of the quarter. Ireland’s defence only gave up one field goal all quarter, a stat which pleased head coach Mark Keenan, who hailed his team’s “intensity” from the start.

Killeen breaks 100 points for Ireland with the dunk 💯💯💯 #FIBASmallCountries pic.twitter.com/xVbzSzYA3X

San Marino were much improved

San Marino were much improved after the break and outscored Ireland by 23-21 in the third quarter, Ygor Biordi with seven points in the period. Ireland finished the quarter with a lovely three point jump shot from the corner by Eoin Quigley to make it 80-45.

Ireland brought up the 100 in style on the break, captain Killeen with a dunk with just over three minutes remaining, to lead 100-59. It was followed by two lovely three pointers in quick succession from Neil Randolph and Sean Flood. A Randolph free throw at the death rounded out a 107-59 win.

Speaking afterwards head coach Mark Keenan said: “I think the most pleasing was the manner in which we started the game. We talk about getting off to a good start, it generally doesn’t necessarily have to mean that we’re way ahead in the scoreboard, it’s just in the manner that we play. We came out with the right mentality and the right manner at the start of the game and then it was a great bonus to put the numbers up on the board. So the way we started, the intensity and the intent I thought was fantastic.”

Sean Flood and Will Hanley top scorers, with 15 points each 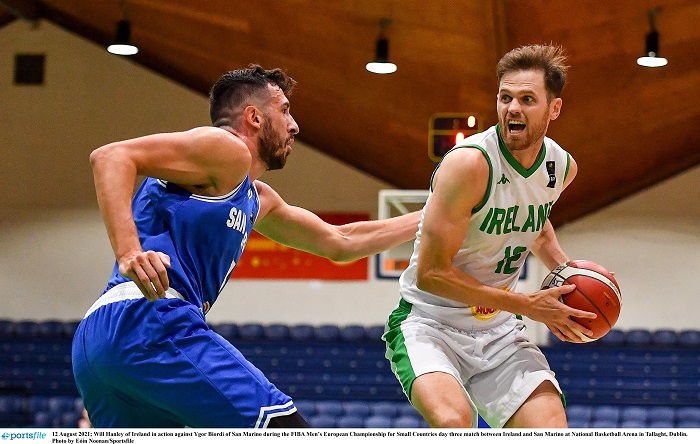 12 August 2021; Will Hanley of Ireland in action against Ygor Biordi of San Marino during the FIBA Mens European Championship for Small Countries day three match between Ireland and San Marino at National Basketball Arena in Tallaght, Dublin. Photo by Eóin Noonan/Sportsfile

There is a tournament rest day on Friday.
Ireland resume with 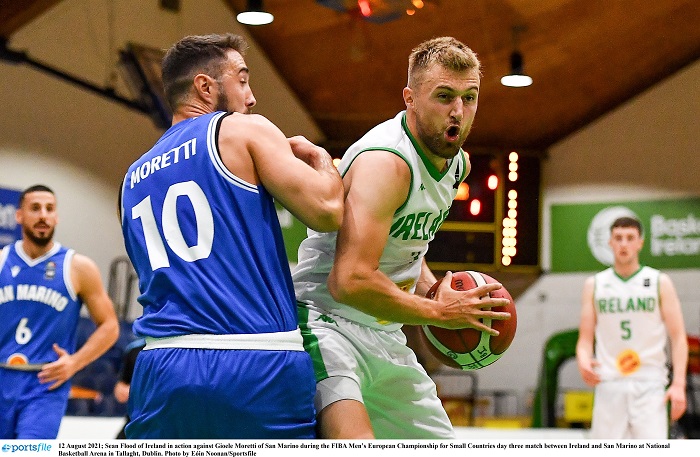