Blog: Why I fell in love with Irish soccer

IT’S just after six o’clock on a chilly November evening in the Ballsbridge area of Dublin, and the night air is filled with the sound of celebration.

Dundalk have just beaten Cork City 1-0 in the 2015 Irish Daily Mail FAI Cup Final at the Aviva Stadium to clinch a league and cup double for the first time since 1988, and their supporters are ready to party.

While the Lilywhites’ players and supporters enjoy the moment, I sit in my elevated position in the press box and take in the scene, which rounds off a memorable day in which I’ve achieved a long-held ambition.

I’ve been across to plenty of league games over the years, but up until Sunday there was one glaring omission in my League of Ireland experiences – I’d never been to an FAI Cup final. It’s been one of those events on the ‘bucket list’ which, for one reason or another, I’d just never got round to sorting.

As a Lancashire-based Scotsman, my interest in the League of Ireland began in the mid-1990s, although in a strange way the link first came about as a result of living in London in the late 1980s. For a few years I lived in Wimbledon in south west London, during a period which coincided with the famous Wimbledon FC “Crazy Gang” upsetting the football establishment and winning the FA Cup.

During that time, I was a regular on the terraces, and a few years later, on a visit to Dublin on a short break, I was running my eye down a newspaper preview of some League of Ireland games due to take place that evening and noticed with interest that Sligo Rovers were in town to play Shelbourne at Tolka Park, with Lawrie Sanchez in charge of the visitors as player-manager.

As a mainstay of the Wimbledon side I had watched a few years earlier, and scorer of the winning goal in the FA Cup final in 1988, the presence of Sanchez obviously elevated the game to a new level of interest for me.

Sanchez played in the game, pulling the strings in midfield as he steered Sligo to a 3-1 win. A decent game played in a well-appointed all-seater stadium delivered a very enjoyable first experience of League of Ireland football, so I returned back across the water with an interest that has remained ever since – although as the years went by, there was a glaring omission for me to address.

So, right from the start of this season, and irrespective of who the participants were, I was determined to attend my first FAI Cup Final. Flights were booked months in advance, and I duly set off early last Sunday morning for Dublin to watch the two top teams in the country this season, Dundalk and Cork City, face one another in the finale to the domestic season. 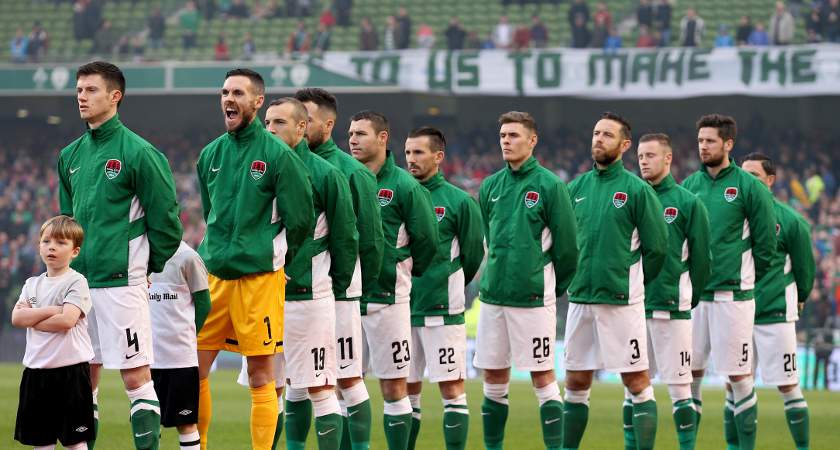 Cork City line up for the national anthem [Picture: Inpho]
Unfortunately, one of the problems in holding a showpiece event outdoors in Dublin in mid-November is that there’s no guarantee of good weather and leaden skies throughout the morning produced rainfall that varied on a scale from heavy drizzle to monsoon-like in the hours before kick-off.

But the rain was never going to dampen the enthusiasm of those of us who were making their way to the game, and I got chatting to a family from Dundalk as we waited at Connolly Station to take the DART down to the stadium.

Three generations of the family were among the group, and the grandmother told me that although she had never been to a Dundalk game in her life, after seeing her grandchildren so enthusiastic about coming to the game, she decided to come with them and share their experience of a day they had been so looking forward to.

When I reached the stadium, the Womens’ final between Shelbourne and Wexford Youths was in progress, and extra time and penalties in that game meant that with less than 45 minutes to kic- off, we had the unusual sight of both Dundalk and Cork City warming up with temporary goal posts at one end and the ladies having their penalty shoot-out at the other, which Wexford Youths won.

As kick-off for the main event approached, the stadium began to fill up and the Dundalk supporters were gathered at the Grand Canal Dock end of the ground, with one banner proclaiming “God Sings In De Shed.”

The City supporters did however take the prize for the more thought-provoking banner, which stretched almost the entire length of the stand at the Lansdowne Road end proclaiming – “It’s up to us to make the best of all the things that come our way.”

I certainly got the impression that Cork had the bigger support in the stadium, and an orchestrated show of colours and a few flares from the City supporters provided an impressive back drop as the teams entered the field, to the strains of an instrumental version of Coldplay’s “When I Ruled The World.” 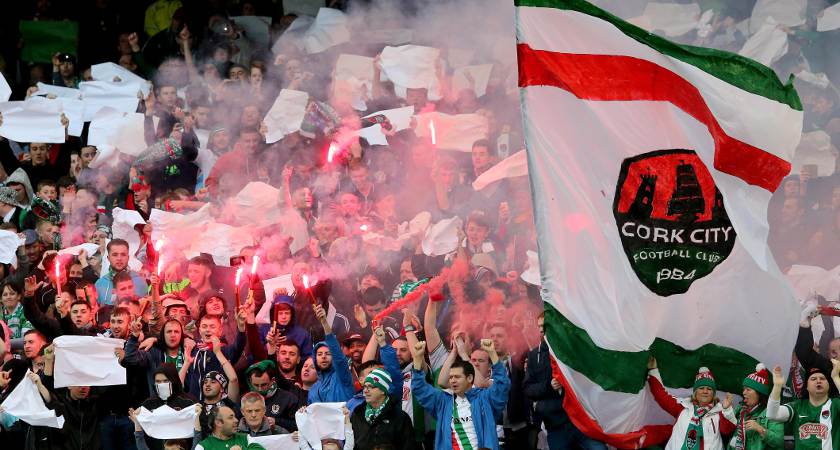 Cork City fans were out in vast numbers [Picture: Inpho]
As palls of smoke from flares dispersed while Amhrán na bhFiann rang around the stadium, the sun came out for the first time and the game was soon underway.

The first-half ended goalless and while Dundalk started well, Cork held firm and as the half wore on, they looked increasingly more comfortable. But it was a case, to use an old reporter’s phrase, of both teams pretty much cancelling one another out.

Three minutes into the second-half we had the best chance of the game up to that point, Dundalk’s David McMillan finding space and unleashing a shot that Mark McNulty in the City goal did well to tip over the bar. Within a minute McMillan broke free again, but a heavy touch took the ball just too far ahead of him and McNulty came out to smother the ball.

The action sparked a reaction from both sets of supporters, with both breaking into song, but the greater numbers of Cork supporters meant that their version of the “Fields of Athenry” drowned out the Dundalk offering from the other end.

In an attempt to get a foothold on the game, Cork swapped one former international player for another when they brought on Colin Healy for Liam Miller on the hour mark, but after a Richie Towell shot tested McNulty, a couple of minutes later a weaving run from Daryl Horgan ended with him firing straight at the Cork keeper, and I couldn’t help feeling the pendulum was swinging Dundalk’s way.

It was certainly the case that the play was more in the Cork half as the minutes ticked down, but their defence held firm under the increasing pressure, and for the first time, an FAI Cup final held in the Aviva Stadium finished goalless after 90 minutes.

It wasn’t a game that you could describe as a classic, but it was engrossing all the same. Both sides looked to have the ability to unlock the other’s defence, but any likely goalscoring chances at either end had been snuffed out by covering headers and tackles, a misplaced final pass, or a heavy touch.

In saying that, Dundalk always looked the likelier to score and after a brief pep talk from manager Stephen Kenny which was staged right in front of their supporters, that pattern continued into extra-time with the game being played predominantly in the Cork half.

But as I began to wonder if penalties would decide the outcome, Dundalk talisman Richie Towell stepped up to the mark once more, two minutes into the second-half of extra-time.

Not for the first time in the afternoon, a surging run from Daryl Horgan took him into the Cork box, and his cut back found Towell, who had time to take a touch and sidefoot the ball into the net from eight yards, his 29th goal of the season.

Cork did create one chance in response, when Darren Dennehy’s header landed on the roof of the net, and two free kicks conceded by Dundalk deep in stoppage time set up a tense finish, but there was no further scoring and when the referee’s whistle ended the game, the stadium was divided in half by noisy celebration at one end, and grim silence at the other. 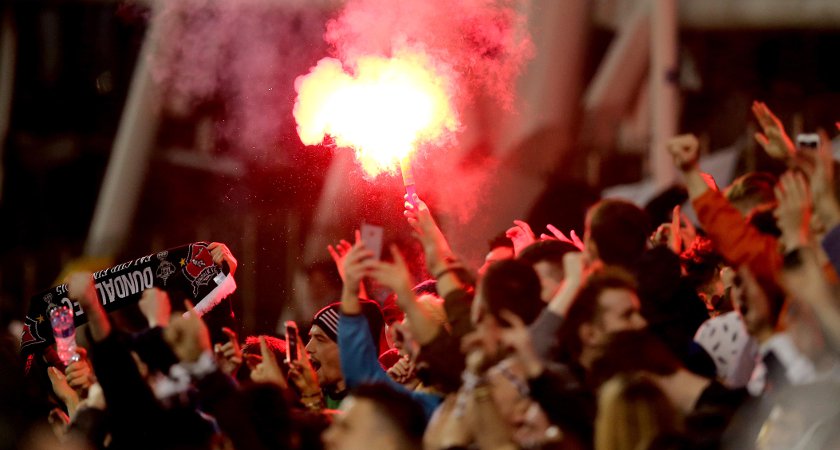 Dundalk fans had the last say [Picture: Inpho]
While Cork pushed Dundalk all the way, there was no doubting that the Lilywhites were deserving winners and as their supporters celebrated, Dundalk manager Stephen Kenny said afterwards that “the energy from the supporters was infectious.” It was hard to argue with him, especially since they had appeared to be outnumbered on the day. They had given their side tremendous support and the players had responded accordingly.

The domestic game in Ireland has no shortage of critics, but it can’t be all bad if over 25,000 people can head to the capital from opposite ends of the country, and support their local teams as enthusiastically as both sets of fans did.

The on-pitch celebrations began to die down, but I stayed as long as I could to savour it all, before reluctantly making the long trip down from the top tier of the main stand and out of the ground to begin the journey back home.

As I headed back to the airport and reflected on the day’s events, I thought of the family from Dundalk I had met earlier, and how they must have enjoyed their afternoon. It occurred to me that we will probably all retain very similar and fond memories of the day we all attended our first ever FAI Cup Final – a day we will never forget.