I'm from Armagh, but I still support the Republic of Ireland over Northern Ireland

WHILST loudly voicing my support for the Republic of Ireland during Wednesday's 1-0 win over Italy, an amusing query was directed my way from a nearby stranger in a bar.

Picking up on my northern accent, a young Brummie lady asked: “Are you from Northern Ireland or normal Ireland?”

Once the laughter died down I answered her question: “Well, I’m from Northern Ireland but I support the Republic of Ireland.”

The confused expression staring back at me is one I’ve witnessed literally hundreds of times in the decade I’ve been living in England.

In a nutshell, here’s an accurate breakdown of the political situation in Northern Ireland, which undoubtedly influences sports fans and the teams they support.

There's no real need to go any deeper, because for me, personally, the reason I support the Republic despite being born and bred just north of the border in Co. Armagh has never really come down solely to politics.

It's more a question of culture; Ireland is the country I identify most with, not Northern Ireland.

Sure, there are elements of my personality that relate more to Northern Ireland – such as drinking Buckfast, saying 'aye dead on' and preferring my Tayto crisps from Tandragee – but ultimately I'm an Irishman. 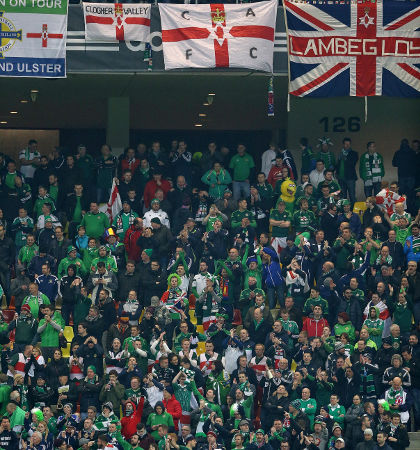 Northern Ireland fans [©INPHO/Presseye/William Cherry]
I grew up playing Gaelic football and hurling, listening to Irish traditional music, reading the Irish News (still the go-to paper for nationalists in the north) and pretending to know all the words to Amhrán na bhFiann.

That's culture, not politics, and that's the reason I've always identified more with the Republic of Ireland team than the Northern Ireland team.

Although Northern Ireland supporters have massively cleaned up their act amid an image overhaul (to their credit) in the last decade or so, God Save The Queen is still played before their matches and Union Flags are still draped over barriers wherever their fans may be.

Nothing of that sort resonates with me. That's their culture, and I'm happy to leave them to it.

And so the million dollar question is whether or not I'll support Northern Ireland if they stay in the Euros beyond the Republic? 'Support' probably isn't the right word, but what I will say is this; anyone but England.