A MANCHESTER Irishwoman who is battling terminal cancer will host a fundraising extravaganza this evening to raise money for the hospice she attends each week.

Despite being given the heart-breaking news in January that the cancer in her lungs has now spread, Betty Carry is pushing her condition to the back of her mind to focus on “giving something back” to those who have supported her since her initial diagnosis.

With the help of her devoted husband Mick, Betty’s Night for St Ann’s Hospice is due to kick-off at St Kentigern’s Irish Club in Fallowfield at 7pm tonight – where they hope to raise up to £10,000 for the centre, which Dublin-born Betty attends once a week.

The couple, who live in Burnage, told The Irish Post that planning the event has helped take their minds off Betty’s condition - which doctors have confirmed there is now no treatment for.

“At that stage we were told only 90 to 95 per cent of people with that diagnosis live past 12 months,” he added. 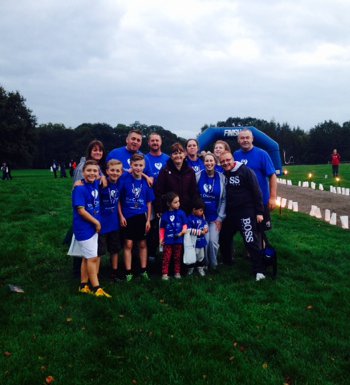 “I can’t find words to explain what it feels like to get a diagnosis like that, it’s like someone ripping out your heart. But thankfully, thanks to her own willpower and the support of family, friends and the medical team looking after her, Betty has managed to make it well past that date.”

For nearly two years chemotherapy treatment helped stabilise Betty’s condition and maintain her quality of life, but in January of this year the pair received a further diagnosis that shook their lives once more.

“Betty has been attending The Christie cancer hospital since her original diagnosis, which is a fantastic hospital,” Mick explains.

“But when we went back in January we were told the cancer was active again. It had spread around her body and was now in the lymph nodes too. Unfortunately they say there is nothing more they can do for her."

The diagnosis came as a second blow to the Carry’s, who met at the Belle Vue dog racing track in Manchester in 1980, when Betty was 16 and Mick was 18, and have been together ever since.

But the couple, who have two children and four grandchildren, refuse to allow the cancer to take over their lives.

“It’s been difficult to get the second diagnosis this year but to be honest the cancer has become a taboo subject for us now,” 53-year-old Mick admits.

“We push it to the back of our minds and we get on. We don’t allow ourselves to dwell on it, we take each day as it comes.”

And Betty, who was just seven when she and her family moved from their home in Dublin’s Finglas to settle in Manchester, is certainly not letting it slow her down.

“I have good days and bad days but I refuse to just lie down and let this get the better of me,” the 50-year-old told us.

“I do what I want to do and I really have felt strongly about raising money for the organisations which have supported me through the cancer.”

For more than a year Betty has been attending regular sessions at St Ann’s Hospice, which offers a range of activities for patients with life limiting illnesses and their families and carers in Manchester.

She hopes her event this evening - which will include music, Irish dancing, raffles and an auction - will allow her to give something back.

“They are reliant on funding and donations so holding a fundraiser seemed the right thing to do.”

Mick, who is today busy with the final touches for the event, added: “I have to admit when the nurses suggested Betty try a hospice it filled me with fear, just the word hospice really.

“But we went along and I have to say it’s a truly wonderful place, it not at all morbid or sombre like I expected and it’s at those visits that Betty truly comes out of herself the most and is most open about her condition.”

Numerous friends, family and supporters have offered raffle prizes for tonight’s event – including Mick’s employer O’Connor Utilities and many of their suppliers.

“It’s been incredible how many donations we have received to support the event tonight," Mick added.

“We can’t thank them all enough and are looking forward to having a fantastic night – we just hope as many people as possible will come out and join us.”

All are welcome to join the Carry’s for their fundraising event this evening (Friday, March 27), with tickets costing £10 on the door at St Kentigern’s Irish Club in Wilbraham Road, Fallowfield.

You can also show your support by donating here